Following the unfortunate and early retirement of the Vancouver Canucks’ Derek Dorsett, a big role has been left vacant in the Canucks lineup — physicality. Enter, Darren Archibald.

Standing at 6-foot-3 and 210 pounds, Archibald is a big man and with his skating abilities, he’s somebody who you want to be vigilant of every time you’re on the ice. He hits, he fights and, wait, he scores too? Archibald is the full package and an extremely welcomed addition to the Canucks’ bottom-six.

Archibald’s journey to the NHL has been a long and tiring road — he’s 28-years-old and has been in the Canucks’ system since 2013, but he’s still only played in 21 NHL games so far. For whatever reason, the Canucks have overlooked the big man, despite him being one of the best Utica Comets, year in and year out. Last season, in particular, Archibald absolutely shredded the AHL — he finished first in team scoring with 23 goals and 24 assists and managed to drop the mitts twice.

His game is constantly adapting to the ever-changing game of hockey and his team’s desires. For example, when he joined the Comets in 2013, he led them in fights with 10 and chalked up 22 points. The next season was almost identical, but with one less fight (still leader) and two more points. The trend continued right up to 2016, as previously mentioned, when he put a major focus on scoring. As goons got weeded out of the NHL, Archibald re-tooled his arsenal and maintained his relevancy — a task that’s easier said than done. 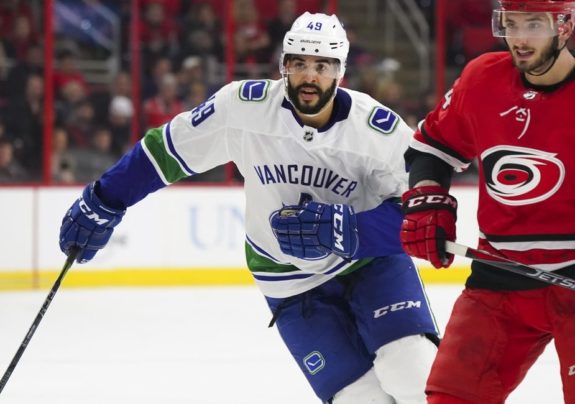 You’re probably wondering why the Canucks never really gave Archibald a chance to be that fourth-line goon that they really could have utilized back in 2013-14-15, and that’s fair. It could have been for any number of reasons, but another question has been raised this season, when he’s actually getting a chance — why now?

Well, guess who else joined the Comets back in 2013. Travis Green. Archibald played four seasons under Green with the Comets and I can only imagine that he impressed the hell out of him — a player as versatile as Archibald is nothing short of a coach’s dream. Now, with Green leading the big-leaguers, the aforementioned retirement of Dorsett and Archibald coming off of his best professional season, it’s the perfect storm for Archibald’s long-awaited opportunity with the Canucks.

The stars have aligned and it’s Archibald’s time to shine. He’s played in only five games so far this season, but he’s still managed to impress the Canucks and their fans alike.

He’s only logged one assist, but he’s also already fought twice. Both of his fights were the results of him doing exactly what is asked of him — the first fight, against the Carolina Hurricanes, was the end-result of a solid forecheck and hard net-drive, while the second fight was practically forced on him after he delivered a bone-crushing hit along the boards in the recent shellacking of the Boston Bruins.

Green on Archibald: It's been good. he's playing in a good role on a checking line, being physical, making plays when he needs to. #canucks

He pushes the tempo, finishes checks (hard), establishes tough forechecks, plays smart and simple hockey, fights and has the ability to contribute offensively — if that’s not what the Canucks need for the future, then I don’t know what is. With the already established relationship between he and Green and what he brings to the table, there is not a single doubt in my mind that Archibald will be in a blue and green sweater for the foreseeable future.

“I owe a lot to Greener over the years. There’s definitely no room for complacency. Me being a big, physical guy, I’ve got to be noticeable on the ice every night. I’ve got to bring that physicality that our team needs. There’s no taking my foot off the gas. I’m back here, but I want to stay this time.” – Darren Archibald told Iain MacIntyre

Archibald knowing his role is probably the most important facet of his game and not over (or under) stepping his boundaries will be the key to his success. Just keep it simple out there and provide sparks for the Canucks when they need it — whether that be with a big hit, a fight, a blocked shot on the penalty kill, a long and daunting forecheck or even a big goal.

Thanks for reading. Tell me your thoughts on Archibald below.