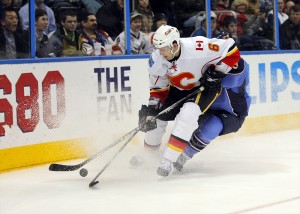 Cory Sarich is just one Sutter-era player due to leave the team this summer. (Todd Kirkland/Icon SMI)

After Saturday’s overtime loss to the hated Vancouver Canucks, the Calgary Flames were officially eliminated from post-season contention for the third consecutive season. This should simply prove that something is amiss in the organization, as the fan base is growing increasingly restless while the players seem eerily content with a “close is close enough” mentality.

As the Flames find themselves playing out the string for nothing but pride, general manager Jay Feaster is undoubtedly working with his cohorts on what he can possibly do this summer to improve the dire state of the team. While the on-ice product will undoubtedly be a key focal point for the Flames’ brass, the evaluation of the coaching staff requires immediate attention due to the expiration of head coach Brent Sutter’s three-year contract.

During his tenure with the Flames, Sutter has failed to coach the team to a playoff berth each year. His frustrated face has become common place on regional television broadcasts, his pleas for improvement have fallen upon the deaf ears of seemingly apathetic players and he has done everything but throw his hands up in the air proclaiming that success is impossible. However, much like Feaster, Sutter should not be held accountable for the sins of his predecessors.

Despite currently being the head coach of the Los Angeles Kings, Darryl Sutter’s fingerprints are still all over the current Flames lineup. Players such as Curtis Glencross, Matt Stajan, Jay Bouwmeester, Cory Sarich and Olli Jokinen are all players acquired by the former Flames head honcho and their consistent inability to live up to their contracts play a significant role in the Flames finding themselves resigned to another lengthy golf season this spring.

More importantly, these are not young players looking to adjust to the rigours and contours of the NHL game. These players are veterans signed to veteran deals and, more or less, are established NHL players.

Brent Sutter, in his entire coaching career, has not had the experience of coaching, motivating and relying on established NHL veterans. He is best suited as a developmental coach, as his prior work in the Canadian Hockey League’s Western League, Canadian World Junior Teams and with the New Jersey Devils indicates.

Beginning with his coaching career in the Western League, Brent Sutter was sensational. He wore multiple hats while serving as coach/general manager/owner of the Red Deer Rebels and compiled a collective coaching record of 268-176-29 to go along with 31 ties from 1999-2000 to 2006-2007. He missed the playoffs only once during this span, a significant achievement in major junior hockey given the unavoidable loss of talent to the professional ranks on an almost yearly basis.

The Rebels experienced the most success under his tutelage in the 2000-2001 season as they captured the only Western Hockey League Championship and Memorial Cup in franchise history. More importantly, he demonstrated the ability to develop players with extraordinary potential as Rebel graduates from the Sutter era include NHL stalwarts such as Dion Phaneuf, Cam Ward, Kris Versteeg and Colby Armstrong. This earmarked Sutter with the unofficial title of the best coach outside of the NHL. 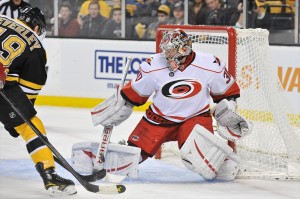 Hockey Canada would recognize this talent by naming him the head coach of the World Junior U-20 Team for the 2005 and 2006 tournaments. Sutter, although given incredibly loaded Canadian squads, delivered in the role as he compiled a combined 12-0 record in the tournaments to go along with two gold medals.

With this opportunity, Sutter was able to show what he could do with future superstars such as Sidney Crosby, Mike Richards, Ryan Getzlaf, Corey Perry, Jeff Carter, Shea Weber and Brent Seabrook.

The result was some of Canada’s most dominating showings at the annual event and the New Jersey Devils took notice, hiring him to coach their team for the 2007-2008 season with the belief that Sutter could get the most out of young talents such as Zach Parise and Travis Zajac. Sutter would coach the Devils for two years and played a central role in developing Parise into a feared goal scorer at the NHL level.

While the Devils were first-round fodder in both playoffs under Sutter (including a historic game seven collapse to Carolina in 2009), they found regular season success with a combined two-year record of 97-56-11 while capturing the Atlantic Division banner in 2008-2009 with 106 points, besting eventual the eventual Stanley Cup Champion Pittsburgh Penguins for the right to a top-three seed.

Sutter would then surprisingly step down from his role for “personal family reasons” only to be controversially signed by brother and then Flames GM Darryl as head coach of the Flames only three days later.

As the Flames continue to circle the drain in the NHL this season, Sutter becomes an obvious but undeserving lightning rod for criticism. He has demonstrated the ability to win at every significant level of hockey and has displayed a particularly enticing skillset by doing so with young, developing players.

As such, Brent Sutter is exactly the kind of coach the Flames require to move towards becoming a force in the tough Western Conference. As the sins of Darryl will slowly dissipate with the expiration of poor, almost untradeable contracts and Feaster begins to implement youth throughout the lineup, it would behoove the Flames to keep Sutter in the fold with long-term goals in mind.

There are few out-of-work coaches with the accomplished resume of Brent Sutter, let alone with the proven skill set of getting the most out of young players with exceptional potential. This, combined with the revolving door of Flames coaches since the lockout, should be more than enough to give Brent Sutter a further look.