On Monday June 15 of last week, the Chicago Blackhawks won their third Stanley Cup championship in six years. The debate of whether Chicago is a dynasty had already been ignited when the team had taken the title twice over a four-year period.

In 2013-2014, the Los Angeles Kings would win their second title in three years sparking the debate of whether they are a dynasty or not and how the team compared to the Chicago Blackhawks success.

Collaborating the Definition of a Dynasty

As far as NHL dynasties are concerned, two examples come to mind first: the New York Islanders in the late seventies/early eighties and the Edmonton Oilers and its reign with numerous Hall of Famers including Mark Messier and Wayne Gretzky. That New York Islander team featured Brian Trottier, Mike Bossy, and Dennis Potvin and won four straight Stanley Cup Championships (1979-1983) for the first time since the Montreal Canadiens had done it in prior to the initial expansion in 1967. The Edmonton Oilers would win five Stanley Cups in seven years from 1984-1990. 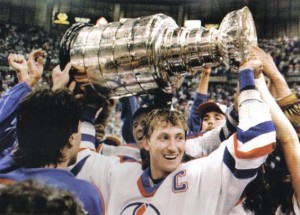 In the salary cap era, parity is something that can be considered on display in the NHL. Every game may be close and some good teams lost early in the playoffs or did not even make the playoffs at all, however, there are few teams that are at the top of the standings or in the playoffs consistently every year.

The first time the Blackhawks won the Stanley Cup, the salary cap had an impact on keeping all of that winning team together. Andrew Ladd, Dustin Byfuglien, and Antti Niemi all played an important role in the 2010 Stanley Cup winning team, but would not return with the Blackhawks the following season. The consequences were apparent, as Chicago would exit the playoffs early that year.

In 2011, the Boston Bruins would win the Stanley Cup, but then the trade-off between the Blackhawks and the Kings would begin: Kings would win the cup in 2012 and Chicago would win in 2013; Los Angeles won the championship in 2014 and now Chicago has won it again in 2015. Not exactly the parity the NHL was striving for, but for two teams to be consistently at the top of the League for the last four years is like a game of championship pong.

Who Will be Next?

With an entire offseason off, the Kings will be looking to make a greater push next year. Predictions have already been made as to which teams will be top contenders next year and the Los Angeles Kings are one of those teams.

Maybe the cup will be rewarded to a team from the East like Tampa Bay or the New York Rangers. Maybe a Canadian team will bring the cup to Canada for the first time in over twenty years. Maybe the Blackhawks can repeat. Or maybe Los Angeles Kings win their third cup in five years.

That may stand up as a better argument in labeling the team a dynasty, but that is a hypothetical at this point and surmising conclusions from hypotheticals can only carry an argument so far. Before this year, both Los Angeles and Chicago had the title of a salary-cap dynasty at their grasps and Chicago has now taken charge this year and holds the fickle title. Chicago is a formidable foe for the Kings and a matchup that gives fans unbelievable hockey, but it’s certainly a (Stanley) cup-check for the Kings.