In October, the Oilers season began on a rough, yet entirely to be expected note. Posting a 4-8 record, the Oilers sat fifth in the Pacific Division, not great, but not terrible either.

Of note, both Connor McDavid and Nail Yakupov suffered injuries, yet the loss of these two players, and their offensive abilities, were not subsidized by the Oilers’ depth players, leaving Edmonton in search of offense on multiple occasions.

One issue which was somewhat clarified in November was the Oilers’ cloudy goaltending situation, as Anders Nilsson emerged as the teams starting goaltender thanks to numerous games in which he single handedly stole his team a victory. Further, he has been consistent, something which the Oilers have long lacked in net. Sure, he let in the odd soft goal, but in the end he held the Oilers in multiple games, especially a few in which the Oilers ultimately lost.

Ultimately, the Oilers showed very little, if any improvement in November of 2015. Sure, they beat a number of strong teams, thanks largely in part to the play of Nilsson, yet they lost a number of games against relatively weak competition, in which they certainly should have recorded one, if not two points. If the Oilers wish to improve in December, they will need to play consistently competitive hockey, despite their opponent.

Looking to improve upon a modest October start, the Oilers skated to a 4-2 victory over the Flyers to begin the month of November. Powered by 49 shots, the Oilers staged a third period comeback, scoring three times to erase a one-goal deficit. Matt Hendricks, Taylor Hall and Ryan Nugent-Hopkins (2) found the twine, while Anders Nilsson stopped 20 of 22 shots in the victory. Despite the win, the Oilers lost arguably their top player, Connor McDavid to injury. Further testing later revealed McDavid had suffered a broken clavicle, and was slated to miss considerable time.

Despite a strong start by Nilsson, the Oilers began the post Connor McDavid era with a 2-1 loss to the Penguins. On the other hand, Jeff Zatkoff had a strong performance for Pittsburgh, earning first star honors. Although the Oilers swarmed the net with a flurry of chances late in the game, including Draisaitl hitting a post, they were unable to punch through. Phil Kessel’s goal mid-way through the third period ultimately stood as the game winner.

The Oilers brought an incredibly strong game to Chicago, carrying the play for the majority of the game, yet were unable to overcome a strong Blackhawks start. Artemi Panarin scored two first period goals and completed the hat-trick late in the third to seal a Chicago win. The Oilers received goals from Eberle and Sekera, the first of both of their seasons, while Talbot stopped 24 of 28 shots in the loss.

Suffering from three separate one-goal deficits throughout the game, the Oilers were able to tie, and then finally beat the Ducks on an overtime goal by Teddy Purcell. Leon Draisaitl continued his incredible start, scoring once and adding another two assists to aid the Oilers’ comeback bid, while Oscar Kelfbom and Nugent-Hopkins also recorded single tallies. Back in net after a game off, Nilsson once again earned the ‘W’, stopping 34 of 37 shots. Although the Ducks were off to a slow start to their season, the Oilers played a sound and relentless game to earn the victory.

After a strong game against the Ducks at home, the Oilers looked rusty on the road in Arizona, surrendering four consecutive goals. Hall found the net a mere three minutes into the game, yet it was all down-hill from there for the Oilers, as the Coyotes carried the majority of play. After the game, Todd McLellan stated that the Oilers roster is “not deep enough right now to play with that lack of polish, and as a result, we didn’t win.”

Back at it against of the NHL’s most complete teams, the Oilers once again fell behind early, struggling to 2-0 deficit. Early in the second, Draisaitl scored his fifth of the season, while Purcell scored late in the period to bring the score to 3-2 for the Kings. After a Taylor Hall goal brought the teams even in the third, Nick Shore put the Kings ahead for good with under two minutes to play, deflating yet another Oilers comeback bid.

Ten days after suffering a hard fought defeat to the Blackhawks, the Oilers once again dropped a spirited affair despite out shooting Chicago 37 to 27. Yet again, the Oilers fell behind 2-0 early in the game before equaling the score at 3-3 on a late goal by Draisaitl. However, the Oilers once again skated away disappointed, as Marian Hossa blasted a shot over the shoulder of Nilsson for the Overtime winner.

Following a tough game, and result against Chicago two nights prior, the Oilers put together a consistent effort against the Devils, skating to a 5-1 victory. Draisaitl had yet another spectacular game, so too did Hall, who each collected a goal and two assists. Eberle, Letestu and Klefbom also scored, while Nilsson once again recorded the win, stopping 19 of 20 shots faced.

Looking to follow up a strong win with another victory, the Oilers ran into an incredibly hot Braden Holtby, who made a number of spectacular saves in earning a 33 save shutout. Dmitry Orlov scored the game winning goal with under seven minutes to play, beating Nilsson who also played a great game, stopping 29 of 30 shots in the loss. The result however did not indicate the Oilers’ effort, as they played a very strong, comprehensive game, simply failing to beat a highly skilled goaltender.

After compiling two back to back strong efforts, the Oilers played one of their worst games of their season against the Hurricanes, losing 4-1. Benoit Pouliot got the Oilers off to a good start, scoring seven minutes into the game, yet the Hurricanes roared back, outplaying the Oilers while scoring four unanswered goals. While Pouliot scored his 100th career goal and Yakupov his 100th point, the latter left the game with an injury after becoming tangled with a linesman following a faceoff.

In what is becoming routine for the Oilers, they once again fell behind early, trailing the Red Wings 2-0 early in the second period. Iiro Pakarinen and Andrej Sekera both scored to equal the score, but Dylan Larkin put Detroit back on top late in the period. Pakarinen scored his second of the game on an incredible individual effort mid-way through the third to force extra time, yet Niklas Kronwall iced the game just 26 seconds into Overtime. Cam Talbot, making a seemingly rare start, stopped 28 of 32 shots in the loss.

In an interesting turn of events, the Oilers got off to a hot start against the Penguins, scoring two goals early in the first period to take a 2-0 lead. Draisaitl scored on a rebound, while Lauri Korpikoski scored his third of the season. However, the Oilers took their foot off of the accelerator, allowing the Penguins back into the game, who eventually tied the game 2-2 in the second and nearly ended the contest in the third. Fortunately for the Oilers, the shootout offered a chance at redemption, an opportunity which Edmonton seized, winning the game 3-2. Nilsson was bombarded with 41 shots, and was arguably the reason why the Oilers won this game, saving 39 attempts.

Despite Garret Sparks starting in his first career NHL game for the Maple Leafs, the Oilers failed to score a single goal, dropping a sloppy affair 3-0. Nilsson had another good game, stopping 23 of 25 shots, while Sparks stopped all 24 he faced for Toronto. In this game, the Oilers struggled to gain any momentum offensively, and were never able to truly test the young net-minder. In all, it was a disappointing effort to end the month for the Oilers.

After a tough, yet entirely to be expected month of October, the Oilers took a step back in November, playing incredibly inconsistent hockey. Despite defeating a number of strong teams, and playing very well against others, there were games, particularly those against weaker opponents, in which the Oilers simply failed to compete at an acceptable level.

Injuries did play a key role in the struggles of Edmonton in November, yet can in no way be used as an excuse for the poor play witnessed throughout their 13 games in the month. With Justin Schultz, Yakupov and McDavid all missing considerable time, the Oilers were without a large amount of young talent, however, good teams simply find ways to win, counting ever more on team depth. However, the Oilers depth forwards have thus far failed to generate much offensively, with players such as Lander invisible on the score sheet.

Despite the pain, there were positives observed in November.

Draisaitl continued his incredible play following his late October re-call, leading the Oilers in goals with five, assists with eight and total points with 13. Not only was he consistent, but he also scored a number of incredibly clutch goals, a number of which helped the Oilers tie given games late.

Also, in goal, Nilsson took the reigns as the Oilers’ un-official starting goaltender, leading his team with numerous impressive performances, some of which arguably won his team given games. Although Talbot was slated as the Oilers starter to begin the season, he has his work cut out moving forwards if he wishes to supplant Nilsson for the majority of playing time.

In all, the Oilers still have an incredible amount of work ahead of them if they genuinely wish to contend in the NHL. Their first task will be to simply put in consistent efforts on a nightly basis. When all players are skating and competing at their highest level, the Oilers can beat some of the best teams in the League, yet when they are not, games which should be easily won turn embarrassing quickly.

Although they played nine of their 13 games in November on the road, they will have an opportunity to relinquish their incompetence in December, with eight of their 14 games coming at home. 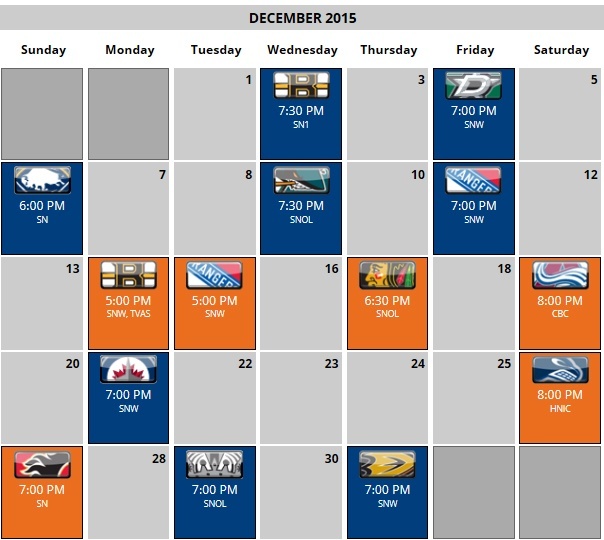