Last month our contributors helped compile the Edmonton Oilers Top 10 Prospects list. This month we’ll be looking at each of those ten prospects in depth in reverse order. Jujhar Khaira was ranked ninth on our list ahead of goaltending prospect Stuart Skinner (10th).

Khaira, 23, was the Oilers’ third round pick (63rd overall) in 2012. Edmonton was intrigued by the upside of having a big power forward that could skate over snagging a defenseman. Khaira became the third straight forward selected by the Oilers, who ultimately passed on several quality players.

Jim Vesey, Shayne Gostisbehere, Colton Parayko and Frederik Andersen were all available to Edmonton in that third round. Khaira has slowly been passed by younger, more impactful players in the system. That being said, Khaira has an opportunity in training camp to have his first full-time NHL season with the Oilers.

Khaira played his junior years with the BCHL’s Prince George Spruce Kings. He played top line minutes and finished second in team scoring during his rookie year. In his draft year, Khaira virtually tripled his goal total and finished tenth in BCHL scoring with 79 points in 54 games.

He’d go on to play one year with Michigan Tech (NCAA) where he once again played top line minutes and finished third in team scoring. In 2013-14 he left the NCAA for the Everett Silvertips (WHL). Khaira would finish fourth in team scoring while scoring an impressive 44 points in 59 games. He’d turn pro and join the Oilers AHL affiliate in 2014-15.

After dominating the BCHL, Khaira’s offensive upside has started to regress at the pro level. He plays a prototypical power game for a forward of his size but has struggled with consistency on the scoresheet. After putting up 1.08 points-per-game in the BCHL, Khaira’s averaged 0.43 at the AHL level.

All that being said, there’s plenty to like about Khaira’s game that has matured over four seasons in the AHL. He might not be the swiftest skater, but he’s been one of Bakersfield’s hardest working forwards. Gerry Fleming has been utilizing Khaira as a center more often than not, and as Bruce McCurdy mentioned, he’s been Fleming’s first choice for big faceoffs.

Over the past few years his defensive game has matured, and thus the Oilers have frequently been recalling Khaira from the Condors. He’s been able to play a fourth-line role, and that’s likely where he fits in Edmonton’s long-term depth chart. His best assets that will help him succeed aren’t his offensive skills — it’s his energy and ability to play a checking role.

The 23-year-old is still on pace to develop into a bottom-six forward. Having a strong year in Bakersfield in 2016-17 is still keeping the hope alive that he can become a top nine player. Injuries caused Khaira to have a bit of a stop-and-go season with the Condors, but he still scored 20 points in 28 games. 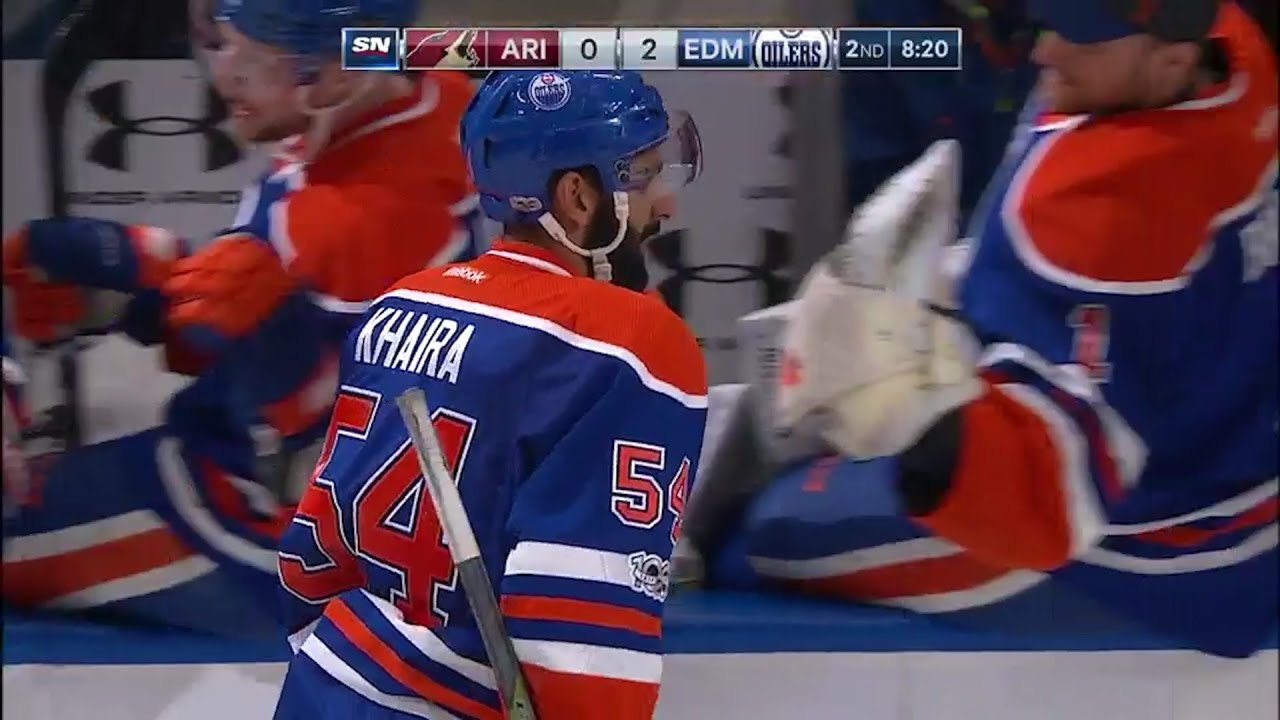 Regardless, he’s been a folk hero in the Punjabi community. Aside from Robin Bawa and Manny Malhotra, Khaira is just the third player of Punjabi descent to ever play in the NHL.

As mentioned, Khaira will have an honest opportunity to make Edmonton’s opening night roster this coming season. Last season he was an early reassignment from training camp and didn’t crack the final 20 forwards in camp.

The fact that the Oilers didn’t go out and sign a significant free agent gives credence to Khaira, Jesse Puljujarvi, Drake Caggiula and Anton Slepyshev getting a vote of confidence from management.

These are the guys that Edmonton is going to win with in depth positions, and the early outlook might suggest the team will at least give them a chance out of the gate. At the pro level, Khaira might not be the offensive player he was in junior. In the long-term, it’ll be the responsible two-way play that’ll make him a quality and versitile depth forward.