Buffalo Sabres star Jack Eichel has been back for two games, but his impact has been immediately noticeable. The Sabres have won those two games by a score of 5-4 against the Ottawa Senators and 4-3 against the New York Rangers. Prior to Eichel’s return, the team only scored more than two goals once in the month of November.

It was expected that the club would improve when their top center returned from injury. However, the immediate impact of the 19-year-old was harder to predict. A high ankle sprain can be a very difficult injury for a hockey player to deal with. The 2015 second-overall-pick has stepped right in and is reminding the league of the kind of player he is.

He’s feared out there, he’s a threat every time he’s on the ice. – Brian Gionta

Teammates and coaches know what type of player Eichel is but are still shocked by how quickly he’s stepped back into being an elite player. After Buffalo’s victory over the Rangers, head coach Dan Bylsma was asked if he was surprised he’s got so much from Eichel so quickly. Bylsma said, “Did I anticipate a two-goal game type of bump? No. It shows what kind of player he can be, what kind of player he is.”

New additions to the roster like Kyle Okposo, Anders Nilsson, and Justin Falk are seeing Eichel up close for the first time and he’s surprised them with how special he is.

Eichel makes impression on Sabres' offseason additions: "I didn’t realize what kind of a difference-maker he was." https://t.co/RMiQwKmrwt

Making Others Around Him Better

The importance of getting Eichel back in the lineup was not just about getting his talent and speed on the ice. It was what his presence in the lineup will do to the other players on the roster. His addition to the roster enables other players to return to roles that fit them better. Guys like Johan Larsson, Marcus Foligno, and William Carrier who were playing top six minutes at times can now go back to being bottom-six role players.

Eichel also exudes confidence, and his teammates thrive off of it. In the two games, his linemates Sam Reinhart and Evander Kane have played their best of the season and have five points combined.

There is also less pressure on Ryan O’Reilly and Okposo. Opposing teams focused on them while Eichel was out of the lineup as the line to shut down. Now, with him back, they get more space on the ice and have a bigger impact. 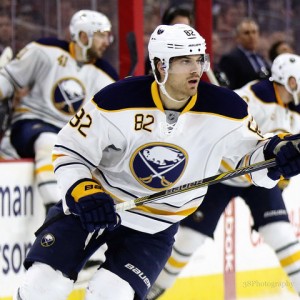 In his postgame press conference, Bylsma alluded to this in describing the good performance of the Larsson, Foligno, and Gionta line. He said the line was, “feeding off the energy that Jack’s bringing.” Bylsma went on to describe how that trio followed up the Eichel line a lot throughout the game and kept the momentum going. The Sabres maintained possession for a good majority of the second and third period against the Rangers, which allowed them to get the comeback victory. When the top line is clicking and the crowd is feeding off of it the energy flows through the rest of the team.

Two games into his return Eichel has recorded three goals and four points. He’s reminding the rest of the NHL that he among the best young players in the game. The Sabres look like a completely different team than we saw over the first 20 games. That feeling of optimism and hope that was surrounding the Sabres in the offseason is now back.