Eisbären Berlin captured the 2012-2013 Deutsche Eishockey Liga (DEL) title for the third straight year Sunday. More impressively, this marks the seventh time they’ve done so in nine seasons. Despite the team’s unprecedented success, they don’t seem to get the recognition or accolades they deserve. In Germany, soccer is king of the sports world. Outside of the country, few individuals other than true European hockey fans, know much about the DEL. They may very well be the best team no one knows about. 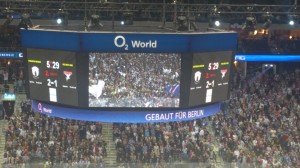 Although support for Eisbären Berlin remains on the fringe like a number of other hockey markets, they do have a very strong niche following. According to 2012-13 attendance figures, the Eisbären ranked third among European club teams, only trailing SC Bern and Dynamo Minsk who both have larger arenas. The 14,200 seat O2 Arena where the Eisbären have called home since 2008 was filled to 98.83% capacity over the course of the season.

Once inside the arena, it is then the Eisbären fans passion is realized. Most NHL games would pale in comparison to the the atmosphere of a game in Berlin, while even the most ruckus ice rinks across the pond would be rivaled. This outpouring of support was on full display as the Eisbären were en route to clinching their latest title on Sunday. The most exuberant fans watch in the section behind the goal where the Eisbären shoot twice where they stand for the entire duration of the game while waving large flags and leading chants such as “Dynamo!” — the clubs pre-unification name.

The team even has their own official anthem, Hey, wir wollen die Eisbären seh’n (Hey, we want to see the Polar Bears) which is played at the beginning of each home game. What’s even more astonishing, is the post-goal celebration. It begins with the verse “Berlin, Halleluja Berlin”, from the song Brandenburg followed by the can-can from Jacques Offenbach’s Orpheus in the Underworld. A strange cartoonish voice then chants, “Ach du meine Nase” (oh my nose) and the ritual concludes with “ene meine miste” (a line from the children’s TV show Rappelkiste).

The expression, “one man’s misery is another man’s fortune” certainly applies to the Eisbären. During each of the last two NHL lockouts, notable players have come to Berlin to keep in hockey shape and have helped secure German championships. NHLers Erik Cole, Olaf Kölzig and Nathan Dempsey helped capture the 2004-05 title, while Philadelphia Flyers Danny Briere and Claude Giroux lent their skills for part of this past season.

Not only did the presence of these players help the on ice performance, they also brought a lof of publicity to the franchise off of the ice, especially in North America where little is known about German hockey. Many fans refer to Eisbären Berlin as “that team Giroux and Briere played for during the lockout.” 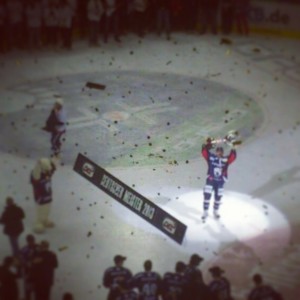 The Eisbären’s string of championships is quite an impressive feat, especially comparing it to the modern era. The last nine NHL Stanley Cup Champions have all been different franchises. The last time an NHL franchise even won back-to-back titles was in 1997 and 1998 when the Detroit Red Wings did it. The most comparable dynasties, are the Montreal Canadiens who won five times in a row from 1956-60 (and would later on won four in a row during the 70s), the New York Islanders who won four in a row from 1980-83 and the Edmonton Oilers who won five championships in a seven-year span from 1984-90. Never in NHL history has a franchise won seven titles in nine years like the Eisbären have.

While one of the biggest arguments may be that the European leagues have much less parity than the NHL, no other European franchise has accomplished what the Eisbären has in modern history. IK Göta also captured seven titles in nine seasons in the Swedish league but did so from 1922-29, while Djurgårdens IF captured eight titles in 10 season from 1954-63. However, the game was vastly different  during these eras and there was far less competition. Eisbären will have an opportunity to match the mark set by Djurgårdens IF, when they begin their 2013-14 campaign.

Even though they have very few readers, Eisbären Berlin continues to write history.

4 thoughts on “Eisbären Berlin: The Most Dominant Franchise in Hockey”