This article was originally published in November, 2012.

Say what you will about Eric Lindros, but the former Flyers captain changed hockey both with his on-ice presence as well as his off-ice headlines.

On Wednesday, the Philadelphia Inquirer reported that the 39-year-old native from London, Ontario will be inducted into the Philadelphia Sports Hall of Fame on November 8, 2012. “It’s a special thrill,” Lindros told the Inquirer. “It’s definitely an honor.”

It is also well deserved for Lindros. Even though he had a tumultuous relationship with Flyers legend and general manager Bobby Clarke, Lindros was undoubtedly the face of the franchise during the 1990’s.

From the time he started playing junior hockey, Lindros was a dominant presence on the ice. There were players before him who had his size and his speed, but there wasn’t a player who had the combination of both.

“If I was going to design one hockey player, it would be Eric Lindros,” said Matthew Barnaby. “He was a man-child.”

Lindros’ unique combination allowed him to make an immediate impact when he joined the Flyers for the 1992-93 season. The 20-year-old Lindros recorded 41 goals, 76 points, and 147 penalty minutes in his rookie year. His production instantly turned him into one of the game’s premier power forwards.

Two years later, in the lockout-shortened 1994-95 season, the Flyers captain scored 29 goals and totaled 70 points in only 46 games. Lindros was tied with Jaromir Jagr as the NHL’s leading point scorer, and won the Hart Trophy as the league’s MVP.

Despite putting up remarkable individual numbers, ‘The Big E’ was never able to bring the Stanley Cup to Philadelphia. Lindros led the Flyers to the Finals in 1997, but even though he recorded 26 points in 19 playoff games, Philadelphia was swept by the Detroit Red Wings.

After the Flyers’ loss to the Red Wings, the relationship between Lindros and Clarke began to deteriorate. Clarke questioned his captain’s toughness, as Lindros missed chunks of time due to the repeated concussions he suffered.

The feud reached its climax during the 1999-2000 season. When Lindros criticized Philadelphia’s team doctors for misdiagnosing one of his concussions, the Flyers’ general manager stripped him of the captaincy.

The End of Eric Lindros’ Career

Lindros ultimately returned for the last two games of the Eastern Conference Finals against the New Jersey Devils, but in Game Seven of the series, a check by Scott Stevens gave him another concussion, and ended his career in Philadelphia.

After Lindros missed the entire 2000-2001 season, Clarke ultimately traded him to the Rangers in the summer of 2001. The six-time all-star spent parts of three seasons with the New York Rangers, but wasn’t the same player as he was with the Flyers.

After the lockout, the six-time all-star spent a year in Toronto with the Maple Leafs, followed by a year with the Dallas Stars. Lindros would hang up the skates in November of 2007 at the age of 34.

Yet Lindros’ impact on the ice is matched, if not exceeded by, the impact he made on the NHL off the ice. The year was 1991, and after Lindros scored 71 goals and recorded and totaled 149 points in 57 games for the OHL’s Oshawa Generals, Lindros was expected to be the first overall pick in that summer’s draft.

The Quebec Nordiques had the first overall pick, and were dead set on taking ‘The Next One.’ However, Lindros had no intention of ever playing with the Nordiques.

When Quebec selected him, Lindros refused to put on the Nordiques sweater that was presented to him. Despite being offered close to $2 million annually to play in Quebec City, Lindros returned to Oshawa. 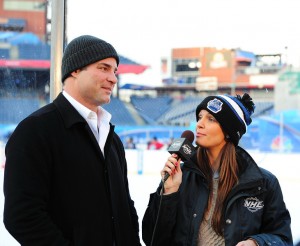 Lindros’ ability to determine where he played in the NHL set a precedent that gave players leverage in any contract negotiations with the teams that drafted them. The latest example of this, although not on the same scale as the Lindros deal, was Justin Schultz‘s decision to not sign with the Anaheim Ducks and instead sign with the Edmonton Oilers.

Eric Lindros’ career is a tale of two stories. One story highlights how Lindros did things on skates that nobody had seen before. The other details how he never fulfilled the hype with which he entered the NHL, and was derailed by a series of concussions.

However, Lindros’ legacy on the game will outlive him. And with career totals of 372 goals, 493 assists, 865 points, and 1,398 penalty minutes in 760 games, even some of his toughest critics believe he should be in the Hall of Fame.

1 thought on “Eric Lindros: A Player Who Changed Hockey Both On and Off The Ice”