Over the last couple of decades, the NHL has become more diversified. Each year we’re seeing more European players enter the league through the draft, as increased media coverage is growing the game in new markets. This is especially true in the United States, where we’re seeing a great deal of growth in some of the hottest climates. Arizona, for example, has more hockey players registered than Tennessee, North Carolina and Missouri.

We can already see the signs of greatness overseas preparing to make consistent headlines in North America. Each year the NHL Entry Draft selects a handful of European stars, some of which continue to dominate the NHL today. The 2017 NHL Draft will take place in Chicago at the United Center and we can expect to see a high number of top-tier European players taken on the first day.

Let’s take a closer look at some of Europe’s rising stars:

Currently playing for the QMJHL’s Halifax Mooseheads, Hischier holds the highest point-per-game-played (P/GP) rate of all 2017 European top prospects. The Swiss centreman was named Top 3 Player on his team for the 2017 U20 World Junior Championship (WJC), as well as the U18 WJC in 2016.

Currently playing for Allsvenskan’s Timrå IK, the 6-foot-2, 161-pound Swedish forward holds a P/GP rate of one point per game played. In 2016, he won the U18 WJC silver medal, as well as the Hlinka Memorial silver medal. Furthermore, he’s developing his skills in the same league as Mikael Backlund (drafted in 2007, No. 24 by CGY), as well as Patrik Berglund (drafted in 2006, No. 25 by STL).

Currently playing for HC Kometa Brno (Czech), the Czech centreman has a P/GP rate of 0.41. He represented the Czech Republic in the 2017 WJC, where he registered three points in five games. In 2015, he played in the World Under-17 Hockey Challenge in B.C., scoring four goals and notching one assist, also in five games.

Currently playing for HV71 of the Swedish Hockey League (SHL), the 5-foot-11, 198-pound Swedish forward won the 2016 U18 WJC silver medal, was named Top 3 Player on his team, and won the Hlinka Memorial silver medal. While playing in the J20 SuperElit league during the 2015-16 season, Andersson was awarded (Top) Most Goals (11) and (Top) Most Penalized Player (61 PIM), Most Assists overall (35) and Most Points overall (59).

Andersson is in a great place to be honing his elite hockey talent, as some of the NHL’s best Swedish players have played in the SHL, including Nicklas Bäckström, Marcus Johansson and Adam Larsson.

Currently playing on loan to Timrå IK of Allsvenskan, the Swedish defenseman has found another top prospect to play with, Elias Pettersson. Liljegren won the U18 WJC silver medal back in 2016, as well as the 2016 U17 WHC bronze medal. He currently holds a P/GP rate of 0.67 with Rögle BK J20 (SuperElit) and is expected to see more playing time with Timrå.

Currently playing for Frölunda HC of the SHL, the 6-foot-3, 207-pound Finnish winger is playing on the same team that Erik Karlsson used to play on before being drafted into the NHL. Vesalainen won the U18 WJC gold medal in 2016, as well as the 2016 J18 SM gold medal. 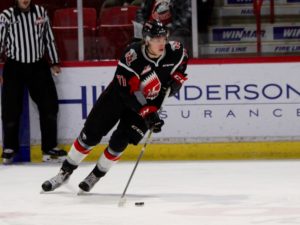 Acquiring Popugaev from the WHL’s Moose Jaw Warriors was one of the first things the Prince George Cougars did in the New Year. The 6-foot-6, 203-pound Russian right winger had already tallied up 51 points in 40 games with the Warriors this season. In his first six games with the Cougars, he’s managed six points.

Finally, Popugaev also represented Russia in the CHL Canada-Russia Series in 2016 and won the U17 WHC gold medal in 2015.