Which players will break out in the upcoming 2017-18 NHL season to become must-own fantasy hockey players?

First, let’s define a breakout player. Forwards will be those players who put up 50 points or more for the first time in their NHL career (at least 0.60 points per game). That would put them within the top 100 in scoring and must-own territory for fantasy hockey.

For defencemen, a breakout player is one who puts up 35 points or more for the first time in their career (at least 0.42 points per game). That would put them in the top 40 among d-men in most years, which is also must-own territory.

Methodology: I’ve pulled the stats for all of the relevant players drafted in the first round (of the real NHL draft, not fantasy drafts) between 2010-2016 and determined how many years it took them to have their breakout season, then used that data to help predict who will break out this season.

You will see charts below showing which players broke out in the first, second, third and fourth year after they were drafted, using the points per game threshold as indicated above.

Breakout Players in Their 1st Year

A number of players have had immediate success in the NHL with breakout seasons in the year they were drafted:

Other than a few outliers (Skinner, Fowler, Tkachuk), these players were all drafted either first or second overall, which makes it easy to narrow down this year’s possibilities.

Hischier is not nearly as good as a Connor McDavid or Auston Matthews but there’s no reason to think he can’t eclipse the 50 point mark in his first year like Landeskog and Nugent-Hopkins managed to do. Hischier has little competition for playing time as the Devils are short on talented forwards and he may get time on the power play with Taylor Hall.

Nolan Patrick (Philadelphia Flyers): I objectively need to include Patrick on this list because of his high talent level, but I will be avoiding him in fantasy drafts this year. His injury history includes a broken collarbone and two sports hernia surgeries, one of which kept him out of the Flyers’ development camp and he recently missed time with an infection. The Flyers also have a much deeper roster of forwards than New Jersey does, so it’s going to be difficult for Patrick to secure top-six ice time right away like Hischier will. Pass!

Breakout Players in Their 2nd Year

Players that break out in the second year after they’ve been drafted are a rarity in the NHL. Only six have managed the feat since 2010, including Mitch Marner and Zach Werenski in 2016-17:

All of these players were drafted within the top eight picks. Who from the 2016 NHL draft could make the jump in 2017-18?

Keller got off to a good start with the Coyotes at the end of the 2016-17 NHL season as he put up two assists in three games. He then went on to score five goals and add two assists in eight games for team USA at the IIHF World Championships.

Earlier this year, Keller was listed as the best player not in the NHL by TSN’s Craig Button and he’ll be in the running for the Calder Trophy in 2017-18.

Breakout Players in Their Third Year

Much more common is the third-year breakout and William Nylander, Nikolaj Ehlers and David Pastrnak rewarded fantasy owners that drafted or picked them up in 2016-17:

For the crop of potential breakout players, look at the 2015 NHL Draft, which was stacked with Connor McDavid, Jack Eichel, Mitch Marner, Zach Werenski and about a dozen prospects that are poised to have their big breakout seasons soon, such as:

Strome and the aforementioned Keller could be this year’s Marner and Nylander, who both put up 61 points for the Leafs in 2016-17. They will benefit from Arizona’s focus on youth and they should both receive top-six minutes playing for new head coach, Rick Tocchet who is known for giving his players the freedom to be creative with the puck and take chances.

From a fantasy hockey standpoint, Strome has an extremely high ceiling. He had 75 points in just 35 games in 2016-17 for the OHL’s Erie Otters. He’s the type of player that could be more valuable in fantasy hockey than in real hockey (basically the opposite of Jonathan Toews).

Hope you don’t have plus-minus in your fantasy hockey league. Rantanen is extremely talented and scored 20 goals and 38 points in his first full NHL season in 2016-17 but he plays for one of the worst teams in NHL history, so his career minus-32 rating is bound to get worse. If you’re looking for points though, Rantanen is your man. He will likely play on the Avalanche’s top line and top power play unit alongside Nathan MacKinnon, making 50-60 points well within his grasp.

Provorov had a fantastic rookie season in 2016-17, leading the Flyers in ice time and blocked shots and was named the Flyers’ most outstanding defenceman. He has plenty of offensive upside as well as averaging over a point per game in the WHL. He delivered a respectable 30 points in his debut NHL season.

Provorov should easily clear 35 points in 2017-18 and will deliver far more than that if he is able to secure the open spot on the Flyers’ potent top power play unit, left available by the departure of Brayden Schenn.

Meier shoots a ton. In 34 games with the Sharks in 2016-17, he registered 2.5 shots per game, which is about the same as Johnny Gaudreau and Jonathan Drouin. Unlike those two, he did so while playing third line minutes. In his second NHL season in 2017-18, Meier is likely to line up with either Joe Thornton and Joe Pavalski (drools), or Logan Couture and Joonas Donskoi (still pretty good).

Breakout Players in Their 4th Year

The fourth year breakout is the most common among NHL players including Ryan Johansen, Vladamir Tarasenko and Dougie Hamilton:

These players were drafted in the 2014 NHL Draft, and while a number of them have already broken out (Aaron Ekblad, Leon Draisaitl, William Nylander, Nikolaj Ehlers, David Pastrnak), there are still plenty of talented youngsters waiting to make a big leap forward.

This one is easy. Reinhart has posted 42 and 47 points in his first two NHL seasons and has averaged 20 goals per season. He’s projected to play on a line with Jack Eichel and Evander Kane and if all three of them can remain healthy, Reinhart is a shoe-in for over 50 points and may eclipse 60. He will soon prove that he was worthy of being selected second overall in 2014.

Fabbri was on pace for a 47 point season in 2016-17 before a torn ACL ended it early. That injury will have to be monitored but if he’s healthy, Fabbri is a good bet for over 50 points in 2017-18. The Blues boast one of the best top-six forward units in the NHL, including Tarsenko, Jaden Schwartz, Alex Steen, Brayden Schenn, Paul Stastny and Fabbri. With two years of NHL experience, great linemates and plenty of talent, Fabbri is poised for a breakout year.

The Stars made a number of acquisitions this off-season but no player will have a bigger impact on their 2017-18 hopes than potential star defenceman Julius Honka. Honka has put up excellent numbers in the AHL, including 44 points in 73 games in 2015-16 before splitting time between the AHL and NHL in 2016-17. He will likely earn a permanent spot in the NHL this year and will benefit from the Stars potent offence. Keep in mind that if John Klingberg waivers or is injured at all, it will be Honka that steps into the top power play unit with Jamie Benn, Tyler Seguin, Jason Spezza and now Alexander Radulov as well. 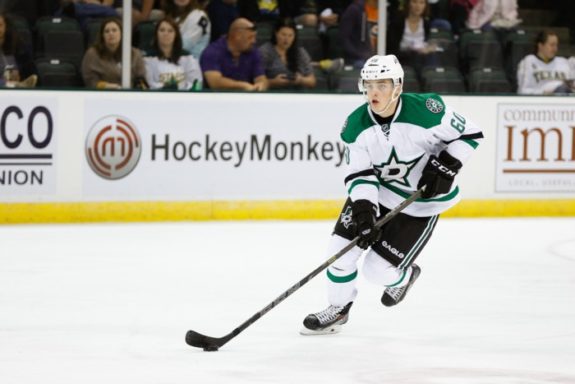 If you draft Honka on your fantasy hockey team you also open yourself up to a wide array of Honka-related team names, and that’s worth something.