Welcome all to my first edition of Fantasy Hockey Studs and Duds for the upcoming season and beyond!

Starting with this piece, and once during each month of the season, I will be taking a look at a stud forward, defensemen, and goaltender, along with 2 honorable mentions at each position. On the other end, I’ll reveal my personal duds for the month, as well as general players you should stay away from on the waiver wire.

I will be basing my projections mostly on stats, but also on the way they played, if they’re injured, and the level of players around them all factor into my decisions. Also I’m basing these off Yahoo’s fantasy points system and projections.

Both of these players were so good for Dallas last year that putting one on this list without putting the other would be completely unfair. The pair are ranked 12 and 13 on Yahoo’s projections with Benn just a shade higher than Seguin.

Simply put, these two were phenomenal for Dallas, as they led the Stars to their first playoff berth since the 07-08 season. Dynamic would be the best work to describe them, as Seguin could blow by defenders and score off the rush, while Benn used his extremely crafty hands to pull off some highlight-reel goals.

If you’re holding the last pick in the first round of your draft, I would very highly recommend taking both Benn and Seguin back-to-back. Benn posted 34 goals and 79 points, while Seguin adding in just a little more at 37 goals and 84 points.

You can’t go wrong with an 80+ point getter in the NHL, and a key to building a solid fantasy team is whenever possible, garnering two players from the same team that put up points. The standard for the past 10 or so years was to take the Sedins back-to-back, however I believe it’s fair to say there’s a new dynamic duo in town.

I’m sure that along with myself, probably every single person in the hockey world wants to know what was going through Canadians GM Bob Gainey’s head when he traded McDonagh to the Rangers for Scott Gomez. I mean at the time, Montreal thought they were getting a good player in Gomez but Jeez, for a trade to turn out this bad is every GM’s nightmare.

Anyway; McDonagh has turned into New York’s best defensemen. McDonagh flourished last season under Head Coach Alain Vigneault, as the 25-year-old established new career-highs in goals, assists, and points. Vigneault released McDonagh from the defensive shell Ex-Head Coach John Tortorella encased him in, as McDonagh played in every offensive situation while being allowed to show off his skill in an offensive-friendly environment. On top of all that Alain Vigneault is expected to name McDonagh captain at some point in training camp.

McDonagh is ranked 63rd overall by Yahoo which is respectable after having the year he had but he is capable of much more. Being only 25, McDonagh is entering the prime of his career so if you’re picking in the middle to late 5th round, I wouldn’t hesitate to reach a bit for him.

So after Carey Price led Montreal to the Eastern Conference Finals last season, we all know Price is a fantastic goaltender, but is he really that good?

In short, yes he is.

Anyone who drafted Price last season were rewarded famously, as after the lockout-shortened season where Price recorded a .905 SV% and a 2.59 GAA, he had the best statistical season of his career in which Price won 34 games, and posted a .927 SV% and 2.32 GAA. Price is now ranked 28th amongst this year’s players.

A big help to Price’s game was bringing in Goaltending Coach Stephane Waite. Waite was able to calm Price’s game down and keep him more composed in net. It obviously worked as Price made extremely difficult saves look often easy as opposing players could only looked skyward at his brilliance.

I do wonder about Montreal as a whole. I don’t understand why they shoved Alternate Captain Josh Gorges out the door, and along with losing Captain Brian Gionta via free-agency, it definitely takes a lot of character away from their dressing room. I don’t particularly think they’re a worse team but I get a strange vibe from them.

Regardless of the team, don’t hesitate to take Price in the 3rd round of your fantasy draft, if you need a goalie, you won’t be disappointed.

Inconsistent is the best word to describe the Hurricanes Captain. Staal really struggled at times on a team that just wasn’t offensively skilled enough to compete, and his stats reflected it. Staal scored the lowest total of points in a full 82-game season of his career, finishing with 21 goals and 61 points. The significance of the total is it’s the first-time in his career where Staal finished below 70 points in a full-season. However when Staal is on his game, let’s just say good things happen.

Another red flag is the plus-minus, in which Staal finished as a minus player (-13) for the 3rd time in the past 4 seasons. Now it may not be Alex Ovechkin numbers, however I don’t expect that stat to change with the Hurricanes poorest defense and average goaltending.

As much as I like the guy as a player, and even though he has the potential to produce at the rate of a top-20-pick, 41st overall is a bit too high for my taste. There are better choices around him like Marian Hosssa, Joe Thornton, and Gabriel Landeskog to name a few. If you feel Staal can bounce-back this season, then feel free to show him some love, however if you ask me, he’s tending downhill, and he’s taking the Canes down with him.

Chara is a very interesting player and if not for his showing in the playoffs, then he’d still be a great defensemen to select. Most likely Chara will put up at least 30 points, have a great plus-minus, and still have the most feared slap shot in the league. The problem is father-time, and even though you can run from him, he’s gonna catch you eventually.

Chara struggled like we haven’t see him before against Montreal in the playoffs which makes me personally very skeptical about taking him with a 6th round pick. In a sense he looked defeated, which isn’t something we’ve seen from the 6’9 Slovak throughout his tenure in the NHL. The attribute Montreal was able to exploit was speed; Chara simply couldn’t keep up with the young Montreal forwards. The league is just getting faster each year, so with Chara slowing down, I’m not sure how much longer he’ll be able to keep up his level of play.

Out of all this, let’s not forget who were taking about here; Chara is still a beast, who’s going to put up points and play hard minutes. He’s got a great cast of characters surrounding him with a bunch of young defensemen like Torey Krug and Dougie Hamilton to back him up.

While I expect Chara to take a step back this season, don’t be scared to take him in the late 7th round or so.

What people need to realize, is that the Kings goaltender isn’t as good as people think he is. What Quick is amazing at is making the highlight-reel save, at the right time in the game, which then turns to momentum is the Kings favor. Quick is the type of goalie which I’m sure anyone would love to have for 1 game, however for an entire season, I’ll pass. 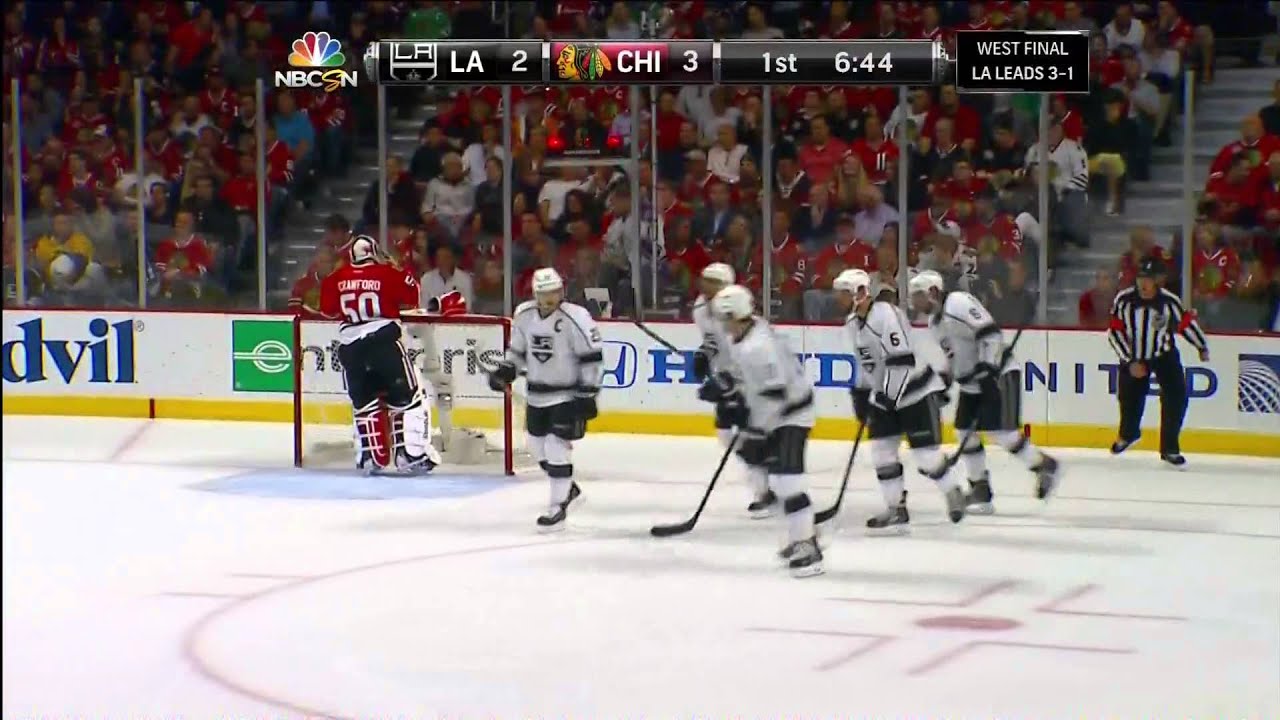 Yahoo ranks him 18th overall which in my eyes is a joke since he only had a .915 SV% last season, along with being hurt for almost a quarter of it. That .915 SV% ranks him 23rd amongst all the goalies. Now his GAA is a very good 2.07 which placed him top-5 in that category, however it can also be said that the Kings play a very solid defensive system which limits the number of shots a game.

Even though his GAA is great, what boggles my mind is that even though he ranked 23rd in goalie SV%, is that he’s somehow 18th overall in fantasy rankings…

I wasn’t aware they gave out bonus points for winning the Stanley Cup.

In the lockout-shortened season, his SV% was even worse at .902 which I wouldn’t put a ton of stock in, however it can’t be totally denied either. Quick is no-doubt a fantastic goalie in every sense of the word, however to make him the 3rd best fantasy goalie out there is outrageous. I’d rather have a plethora of other players like Carey Price, Sergei Bobrovsky, and Corey Crawford any day.

If you decide to take Quick with your late-second or early third pick in the draft then you’re doing yourself and your fantasy team a disservice.