Flyers GM Paul Holmgren has proven he’s not afraid to make unpopular decisions. Trading the cornerstones of the franchise in Mike Richards and Jeff Carter is all the proof you need. So when it comes to Brayden Schenn, the often criticized Holmgren can either give him the payday that he’ll inevitably get, or use a secret weapon, which would ultimately make Schenn expendable.

Even with the NHL salary cap expanding next season, the Flyers will enter the upcoming offseason as a team in need. After signing Vincent Lecavalier to a five-year deal worth $22.5 million (with a No-Movement clause), the center position won’t necessarily be one of them. With team captain Claude Giroux and defensive wizard, Sean Couturier, locked up down the middle, Brayden Schenn naturally seems to be the odd man out.

If Holmgren were to make Brayden Schenn expendable, it would leave a hole to fill down the middle or on the wing, nonetheless. Moving Lecavalier to the wing was an experiment gone bad and the results from moving him back to his natural center position prove just that, denting the twine three times in the past two games. That’s where Flyers prospect Scott Laughton enters the equation.

Laughton, who was selected 20th overall in the 2012 NHL Entry draft, may be forced to be NHL ready by next season whether he legitimately is or not. By taking Laughton at the 20-spot in the draft, Holmgren not only loaded up on yet another forward with a first-round pick, he also let stud defenseman Olli Maatta slip down to the Pittsburgh Penguins at pick number 22.

Despite Maatta establishing himself at the NHL level this season, drafting Laughton could potentially still pay off for Holmgren and the Flyers, should he pan out. Not only was the 19-year-old named as the captain of Canada’s World Junior team this past year, he went on to tally seven points with a plus-three rating in the tournament.

“I’m an older and with my pro experience and things like that I knew I was going to be a leader on this team, whether I did get a letter or not,” said Laughton upon being named Canada’s WJ18 captain. “Just a big day for me and a really big honour.”

Before joining Philadelphia’s AHL affiliate in Lehigh Valley this year, Laughton toyed with the competition in the OHL, scoring 23 goals and 33 assists in 49 games with the Oshawa Generals. Laughton’s plus-22 rating was supplemented with 72 penalty minutes, making him fit the identity of what it means to be a Broad Street Bully, as well as certain other projections.

“For the 2011-2012 season, Laughton ranked fifth on his team in points with 21 goals and 32 assists. With seven fights during the season (including the preseason), Laughton is a physical player who racked up 101 PIMs.

He is regarded as a great two-way forward with a quick and accurate slap shot. Laughton has good offensive instincts and he is strong with his defensive positioning. To be a competitive player at the next level, Laughton needs to bulk up and improve his skating.” — Philadelphia Flyers Examiner

If Laughton were to fit the fourth line center position, it would not only add to head coach Craig Berube’s defensive style, it would do so at a far less cost than any other alternative, making, yes, Brayden Schenn expendable.

“We’re becoming a defensive hockey team for sure,” said Berube. “It’s taken time, but we’re getting to where we need to get to, and part of that is penalty killing too, and we have to stay out of the box. We’re trying to improve in all those areas.”

#Flyers C Scott Laughton has gained 14 lbs (up to 194) after getting pushed around at last year's big camp by Grossmann.

Another perk lies in Laughton’s NHL Entry-Level contract, which hasn’t counted against the Flyers until this season. With Laughton under contract at the price of $1.106 million-per-year through 2016, the surplus of Holmgren’s Monopoly money could be used in other areas of dire need.

Still, making the decision to make Brayden Schenn expendable could be a financial decision, even if the traditionally cap-strapped Flyers don’t find themselves up against it this offseason. With six unrestricted free agents, and three restricted free agents (counting Schenn), allowing Schenn to cash in elsewhere would still financially benefit the Flyers, who will again need to shore up a blue line that seems to have been depleted since Chris Pronger was forced to wear a visor.

Yes, drafting Olli Maatta in lieu of Laughton would’ve filled an immediate defensive need without using the middle man known as free agency or a trade. But what’s done is done, and as mentioned earlier, Laughton could still benefit the Flyers while still enabling Holmgren to build a strong defensive foundation. Kimmo Timonen is likely playing in his final NHL season, while the NHL’s blocked shots leader, Andrew MacDonald, is due to become an unrestricted free agent.

Holmgren didn’t acquire the former Islanders defenseman at this year’s trade deadline to use as a rental. In the final year of his contract, which pays an annual salary of $550,000, MacDonald will deservedly be asking for a spike in pay with Holmgren eager to oblige.

“Andrew MacDonald is a guy we had focused on, and we believe he’ll make our team better,” said Holmgren upon trading for MacDonald. “And with an eye on the future, we have an interest in keeping Andrew for a longer term.”

Also approaching restricted free agency is 25-year-old defenseman Erik Gustafsson. Although the Swedish defender has yet to put in a full season in the NHL, bouncing between the AHL and Philadelphia since 2010, re-signing Gustafsson would be financially savvy. Gustafsson would give the Flyers either a steady third line defenseman, or added depth.

That’s not to say Gustafsson will be in Philadelphia’s plans past this season. In his fourth season in the Flyers organization, Gustafsson has yet to consistently crack the lineup, drawing the short straw when MacDonald was acquired at the trade deadline.

“I need to realize sometimes, you don’t have time with the puck, but most of the time, you do,” said Gustafsson. “That’s what I’ve got to do. That’s my game. It’s simple. When I don’t do that, I’m not going to play.”

Whether Gustafsson returns or not, the added cash flow from Schenn’s potential departure could be used to woo a top tier free agent defenseman. The unrestricted free agent pool will be shallow this summer, with few names on the right side of 30. But there are several potential targets the Flyers could send an offer sheet to on the restricted free agency list.

It’s hard to see the Florida Panthers holding onto both Dmitry Kulikov and Erik Gudbranson. Should the Panthers keep the pair of d-men, who are in their early 20’s, the Toronto Maple Leafs have Jake Gardiner and Cody Franson to worry about re-signing.

Of the mentioned names, Holmgren has shown the most interest in Gardiner, the 17th overall pick of the 2008 NHL Entry Draft. Gardiner’s name has been tied to Holmgren’s interest throughout the rumor mill earlier in the season, with talks cooling off as the deadline drew closer.

“According to Sportsnet’s Nick Kypreos, the Toronto Maple Leafs have expressed an interest in Schenn, but the asking price would be defenseman Jake Gardiner, a player the Leafs would rather not move.” — The Fourth Period

If the only hangup on trading Schenn to Toronto was the Leafs’ refusal to deal Gardiner, then it’s obvious that Holmgren already considers Brayden Schenn expendable. The expanded salary cap, along with the money that would otherwise be used to re-sign Schenn could be the right combination to finally bring Gardiner to Philadelphia.

Is It Wrong To Consider Brayden Schenn Expendable?

So why are so many quick to declare Schenn’s re-signing to be a top priority? For starters, the youngest of the Schenn brothers is a pup with significant NHL experience. At just 22-years-old, the Saskatoon native has amassed 38 goals and 47 assists over the course of 184 games. Along with his youth, it’s also worth mentioning that Schenn was a key piece of the trade that sent Mike Richards to the Los Angeles Kings. 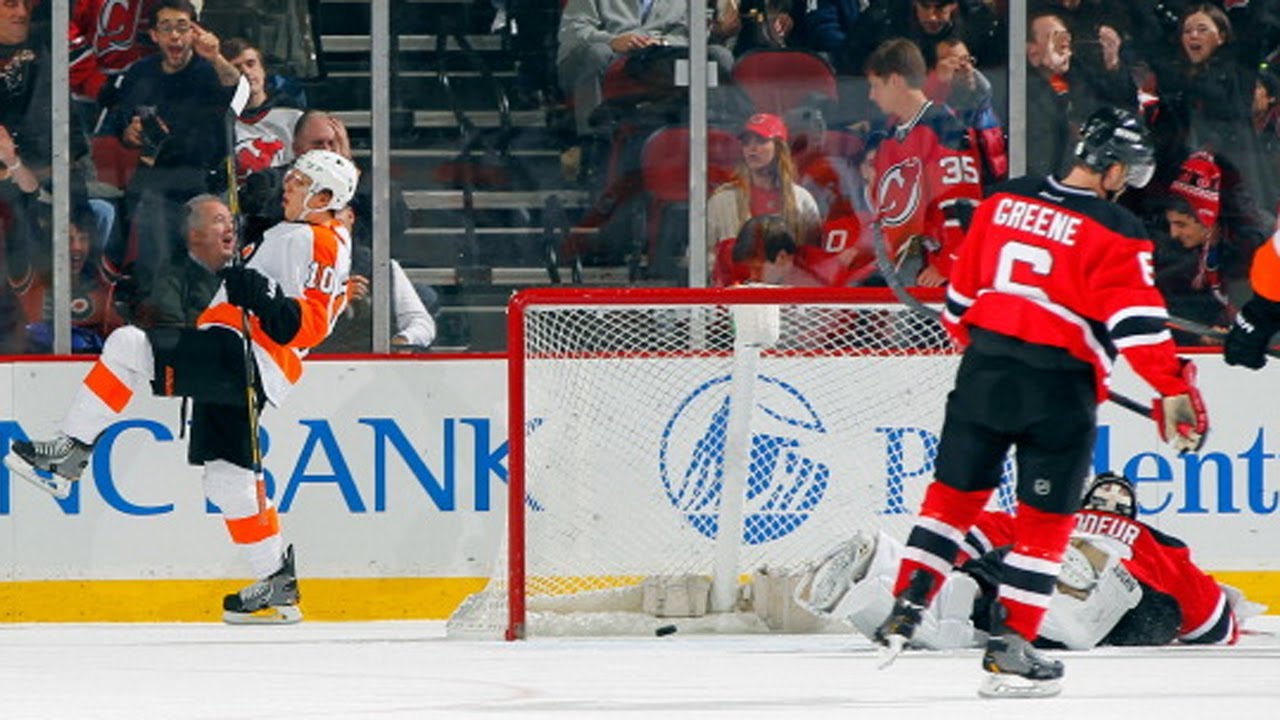 Schenn has not only set a new career high in points with 39, his five game-winning goals trail only Claude Giroux by one for tops on the team. And despite weighing only 190 pounds, Schenn hasn’t been afraid to show off his physicality, with 29 hits in his last 10 games. Furthermore, his 52 penalty minutes are a team fifth among forwards.

“I’m getting more physical and maybe a little more involved, and when I do that, it gets me in the game more,” explained Schenn. “And I’m finding a little chemistry with my linemates.”

If the Flyers do keep their young power forward, it doesn’t automatically make it the wrong decision. It doesn’t consequently make it the right decision either. After all, it’s quite conceivable for the same team that sent Mike Richards and Jeff Carter packing at the blink of an eye to consider Brayden expendable.

3 thoughts on “Do The Flyers Consider Brayden Schenn Expendable?”