His exile to the land of chocolates, fine timepieces, and movie-villain banking accounts is over.  Matthew Lombardi is back in the NHL.

The native of Hudson, Quebec, will now be playing just four blocks from the Hudson River.  The New York Rangers have inked the 32-year-old center to a 2-year, $1.6MM deal.

Lombardi led the Swiss League in scoring last season, posting 20 goals and 30 assists in 46 games with the Genève-Servette HC.  Lombardi played on the club’s top line alongside former NHLers Kaspars Daugavins (Bruins, Senators) and Alexandre Picard (Blue Jackets).  He helped the team reach the league semifinals where they were ousted by the eventual champion Zurich Lions.

Lombardi also played a key role in helping Genève-Servette capture its first Spengler Cup.   He led the tournament in scoring with four goals and four assists in eight games, including a three point performance in the club’s 6-5 seimifinal win over Team Canada. 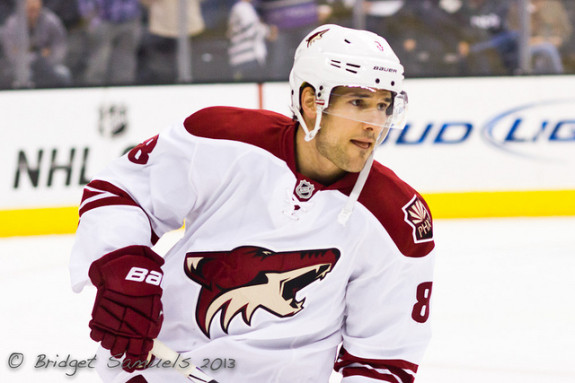 Matthew Lombardi in 2013 with the Phoenix Coyotes (Image: Bridget Samuels)

Lombardi’s last NHL season was 2012-13, which he split between the Coyotes and Ducks. In 28 games, he managed just eight points.

He was originally drafted by the Edmonton Oilers in 2000. Unable to come to terms with the club on a contract, he re-entered the draft in 2002 where he was selected by the Oilers’ rivals to the south, the Calgary Flames.  He spent five seasons in Alberta before moving on to stops in Phoenix, Nashville, Toronto, and Anaheim.

Lombardi’s suffered some injuries over the course of his career.  He’s played a full 82-games just once, in 2007-08.  He hit 81 the season before.  Since then, though, he’s missed quite a bit of time.  Most signficant was the concussion he suffered in 2010.  In just his second game with the Nashville Predators, Lombardi fell awkwardly into the boards.   He sustained a concussion on the play and missed the remainder of the season.  It was the second confirmed concussion of his career.

He was sidelined early in the lockout-shortened 2013 season with an upper-body injury which Coyotes coach Dave Tippett said was unrelated to his previous history of concussions. 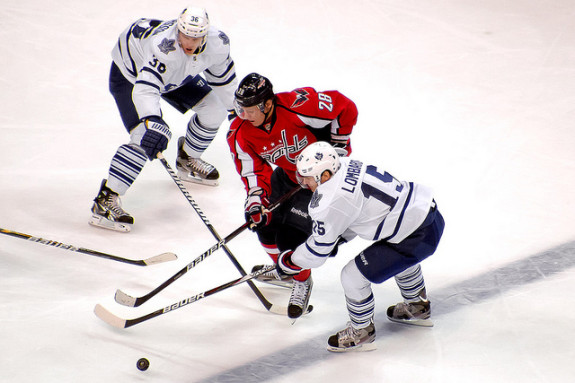 So why did the Rangers go after an injury-prone Swiss-league player?

It’s a low-risk deal for Sather.  With Dominic Moore locked in as the fourth line pivot and Stepan/Brassard handling the top two lines, Lombardi can slot in as the third-line center.  If one of the Rangers’ prospects, namely J.T. Miller or Oscar Lindberg, impresses in camp, they can step right in.   If not, Lombardi can contribute while Miller and Lindberg continue to get top-line experience in Hartford.   It’s a depth move and a solid contingency plan for the Blueshirts.  At the very least, he’s keeping the spot warm until the kids are ready.  Based on his play in the Swiss League, he might even be able to chip in a few points.