The 2017 NCAA Basketball Tournament brackets are set and so begins the madness. At the same time, the Stanley Cup Playoffs are right around the corner and NHL fans everywhere are impatiently waiting for them to arrive.

We still have another month until the playoffs start though, so I’ve found something to do in the meantime. In the spirit of March Madness, I used bracketology to form a unique alternative to the NHL playoffs.

Let’s treat the NHL playoffs as the Sweet 16 in the NCAA Tournament. Only difference is that the NHL playoffs consist of seven-game series whereas the NCAA Tournament is win-or-go-home each round. I took the top 16 teams in the NHL in points and seeded them 1 to 16, throwing division and conference out the window in some matchups. With weeks still left in the regular season, the seedings are likely to change a bit. But as of this writing, the playoff bracket would look like this: 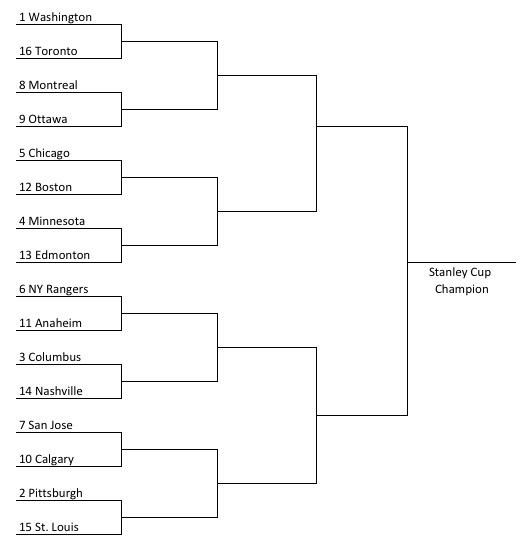 The first round doesn’t boast many outstanding series but there are two that I think go seven games: Montreal Canadiens vs Ottawa Senators and Columbus Blue Jackets vs Nashville Predators.

The Canadiens are capable of making a deep run as long as Carey Price is in net but division foe Ottawa is no joke this year. The Senators can score goals and play lockdown defense. Both teams added small pieces at the deadline to deepen their lineup making this Canadian matchup a possible doozy to watch.

The Blue Jackets and Predators were division rivals before the Jackets moved to the Eastern Conference. The rivalry could be restored in a playoff series that features Seth Jones and Ryan Johansen, who were swapped by these two teams in a blockbuster deal a year ago.

The second round could feature a rematch of the 2016 Stanley Cup Final between San Jose Shark and Pittsburgh Penguins. Both teams could be destined to make another run to the Cup this year and it wouldn’t surprise me if they met again in the Finals.

Washington Capitals and Chicago Blackhawks could face each other in the semi-finals in what I think would be the best series of the playoffs. It’s quite possible these two star-studded rosters collide in the Finals this year and if they do, it will be a treat for all viewers.

The two teams that I think make it to the Finals in this new ‘NHL Bracketology’ are the two teams that are both likely down to their last chances to capture the Stanley Cup: Washington and San Jose.

The Capitals have been loaded for years but haven’t reached the Eastern Conference Finals since 1998. This year, they just seem too loaded not to make it to the Stanley Cup Finals. They’re running out of time to make their run, though, as many players are set to be free agents this summer including TJ Oshie, Justin Williams, Karl Alzner and Kevin Shattenkirk.

San Jose knows how to get there and will do so again on the heels of an aging roster. “Jumbo” Joe Thornton and Patrick Marleau can’t play forever and they both have expiring contracts after this season. I think the experience they gained on their run last year will steer them in the right direction this postseason. The Sharks win the Cup while Alex Ovechkin and the Capitals have to wait yet another year.

Should the NHL Change the Format?

I like the current format because of its focus on the divisions. It creates excellent first and second round matchups between rivals that are really fun to watch. It is a bit unfair though when you have a division such as the Metropolitan this year that has its top three teams taking over the top three spots in the entire league. However, a division this good doesn’t happen often.

The format of seeding teams 1 through 16 creates for many inter-conference series which could be problematic in terms of travel and scheduling during both the regular season and playoffs. With more negatives than positives, the NHL would likely turn this idea down quickly.

But this isn’t a real proposal. I’m just having a little fun during one of the most fun times of the year and I thought I’d share the fun. Please feel free to comment below with your thoughts on the bracket and who your Stanley Cup champion is after filling it out.