As hockey fans we’ve been to our fair share of battles on the pond. Parents take their kids to the arena, buddies invite their friends, and diehards spend thousands for season tickets to cheer on the hometown team. Each game brings with it a new memory – one that might last with someone for the rest of their lives.

I used the help of some of my fellow THW writers on this one and asked them what was the greatest game they’ve ever witnessed.

Jeff Ponder has lived through the highest of highs and the lowest of lows as a St. Louis Blues fans. There was a stretch where they couldn’t win and other times where he felt “this is there year”. When he was a teenager, he attended a crucial game for the Blues in a semifinals matchup in the playoffs.

“I had just turned 16-years old and was hoping for the greatest gift a young hockey fan could receive – a Stanley Cup. It had eluded the St. Louis Blues for 34 years, but this team seemed like it was finally going to do what all the other teams couldn’t. On May 3, 2001, that dream came closer to being a reality. 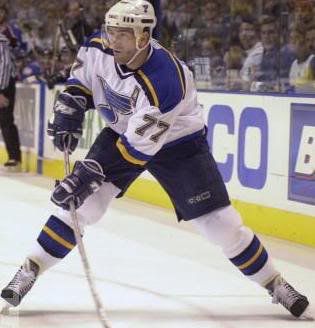 The Blues, holding an unprecedented 3-0 series lead over the rival Dallas Stars, had a chance at reaching the conference finals for the first time since 1986. To add to the high emotion, the Blues were trounced by the Stars in the 1999 playoffs en route to the franchise’s first Stanley Cup championship. It was a bitter pill to swallow, but it looked like payback was coming to Blues hockey fans in this game.

Roman Turek was manning the pipes for the Blues and across the ice was his old mentor, Ed Belfour. The Blues’ top line (Dallas Drake – Pierre Turgeon – Scott Young) had been a nuisance for the Stars in the series. Tonight would not be an exception.

Turgeon received a breakaway in the second period but it was defenseman Alexander Khavanov who tapped in a rebound to put the good guys up 1-0. Newcomer Keith Tkachuk gave the Blues a 2-0 lead before Stars center Joe Nieuwendyk added his fourth of the playoffs to cut the lead to 2-1 before the third period.

The final stanza was all Blues, as captain Chris Pronger blasted a wrister to beat a diving Belfour for a 3-1 lead. Young tabbed an empty-net, breakaway goal to seal the deal as the Blues clinched in convincing fashion, 4-1. As a fan in the stands, I witnessed the bedlam inside Savvis Center as hugging complete strangers and high-fiving everyone around you was a social norm. Chants of “Bel-four” could be heard well after the Stars left the ice and rally towels poured from the upper deck in celebration.

Although the Blues were defeated by the destiny-driven Colorado Avalanche in the Western Conference Final, that magical night in St. Louis was one that would not soon be forgotten.”

I don’t envy having to be an Oiler fan. Recent memory shows that despite hoarding top draft picks, the team is consistently swirling further and further down the drain. But it wasn’t too long ago where the Edmonton Oilers made a spectacular run to the Stanley Cup Finals where they were forced into a corner in Game 6. Edmonton had to win to play a 7th game back in Carolina. As Shane Sander recounts:

“It was everything you want in a big game scenario. Stanley Cup Finals, a raucous crowd, one team looking to stay alive another night and one team looking to win their first Stanley Cup in franchise history. The 2006 Oilers were nothing of their predecessors of the old 80’s dynasty of the run-and-gun ilk. These Oilers were a group of ragtag defense-first shot-blocking blue collar type of hockey team built around Dwayne Roloson, Chris Pronger, Ryan Smyth and Jason Smith.

Already down 3-2 in the series and facing elimination the Oilers were powered to a 4-0 win over the Hurricanes led by the likes of now folk-hero Fernando Pisani and Jussi Markkanen. The Oilers lost their Conn Smythe trophy favorite in Roloson during Game 1 and after a Ty Conklin meltdown the Oilers rode their 3rd string in Markkanen the rest of the series. Game 6 was the pinnacle of the Cinderella 2006 Stanley Cup run and highest of highs Oilers fans would feel since the 1990 Cup win.

It was also the last home playoff game the Oilers have played.”

Growing up in Calgary, hockey courses through your veins. Unlike their rivals (Oilers), Calgary has not been able to hoard top prospects and haven’t made the playoffs since 2009-10. But 2004 was a promising year for Flames fans after a tumultuous stretch in the 1990s. Jerome Iginla and Mikka Kiprusoff were at the top of their respective games and pushed Calgary to the Stanley Cup Finals that year. Ryan Pike was fortunate to go to a playoff game that year considering how difficult it is to get playoff tickets in Canada.

“Game 3 of the Western Conference Quarterfinals between the Calgary Flames and San Jose Sharks is probably the best hockey game I’ve seen live. The Flames were beginning their gradual decline after a few seasons of strong play and disappointing playoffs following the 2004 Stanley Cup final run and the lockout. The team was getting older and the team couldn’t replace their aging stars with youngsters.

Up against the Sharks, the Flames were already down 2-0 in the series after losing twice at the Shark Tank. They quickly went down 3-0 on the first five shots of the game, chasing Miikka Kiprusoff from the nets. Curtis Joseph came into the game in relief. And then Cory Sarich leveled Patrick Marleau with a big hit, leading to a melee and a Flames power-play. The Flames scored on the power-play, and came back to win the game on the back of Curtis Joseph’s stellar net-minding and a goal by Owen Nolan late in the third.

The game brought the Saddledome crowd from the depths of despair to the heights of joy. All within the same 60 minutes of hockey. Man, what a game. I miss the playoffs.”

Having covered the New Jersey Devils for quite a few seasons, Dan Rice has been to countless games and seen just about everything a hockey game has to offer. However, in 1996 there was a much bigger hockey event going on than any New Jersey Devils game could match.

“In the summer of 1996 I won a contest from the NY Post, two tickets to two games at MSG and two tickets (plus airfare/hotel) to Montreal for Game 2 of the best-of-three final. I remember the obvious feeling of being in enemy territory, as my father and I took our seats at center ice in the Molson Centre (now Bell Centre). After losing Game 1 in overtime to Canada in Philadelphia, Team USA came out sharp as the game started, but what really caught my eye was that this was an All-Star Game, but a lot more serious than a ‘real’ All-Star Game.

Both teams were stacked with “top tier players”:

Mike Richter & Curtis Joseph were both stopping high quality chances left and right. One of my favorite players was booed every time he had the puck, or his face was shown on the jumbotron: Brett Hull who has dual citizenship and chose to play for the USA rather than Canada. I believe the game was 2-1 via two John LeClair goals when Hull scored to make it 3-1. I’ve been to Yankee Stadium for Yankees-Red Sox playoff games and the booing wasn’t as loud as it was in that arena when Hull scored that goal.

Canada battled back and made it 3-2 in the third before Team USA sealed a 5-2 win with two empty netters (Keith Tkachuk, Scott Young). Unlike the real NHL All-Star games this was a fiercely competitive game with body contact and the usual win at all costs style that we all love so much as hockey fans. It was also a pretty cool moment to walk out of that arena into the night (quietly) as a fan of the winning team on foreign soil.”

As for me, there is no game quite like the National Championship game of 2009 between the Boston University Terriers and the Miami of Ohio Redhawks. I had grown up a Terriers fan watching the legendary Jack Parker behind the bench. BU had the best team in the nation that year. Players like Colin Wilson, Kevin Shattenkirk, Nick Bonino, and Hobey Baker winner Matt Gilroy formed to make a powerhouse team.

The game was played in the nation’s capital of Washington, D.C. It wasn’t until I got to my seat that I realized I had purchased tickets in Miami’s cheering section. Surrounded by opposing fans was a little uneasy at first, but after Chris Connolly scored for the Terriers in the 1st period I was a bit more at ease.

Miami would tie the game in the 2nd. It was until eight and half minutes in Tommy Wingels would score for Miami, which was quickly followed by another goal a little over four minutes later. A two-goal deficit with four minutes to play is almost insurmountable, but BU was a team who thrived on pressure situations. With three minutes and some change Jack Parker pulled his netminder, Kieran Millan, to get an extra attacker. As the saying goes: the rest is history.

The Terriers were buzzing the last two minutes of regulation. The threw everything at the net hoping the puck would bounce their way and with 59.5 seconds left, Zach Cohen backhanded a shot that squeaked through Cody Reichard’s pads to cut the lead to one. BU picked up right where they left off and hemmed the Redhawks in their own zone. Chris Higgins threw a pass to Matt Gilroy at the point. Gilroy had the presence of mind to deke around the defender and set up a one-time bullet from Nick Bonino to tie the game with 17 seconds to go. It was pandemonium on BU’s bench and heartbreak for the Redhawks.

The overtime period was a back and forth tilt that kept everyone in the stadium on edge. With every save you could hear the gasp from the crowd. Then it was Colby Cohen’s time to shine. He received a pass at the left point, moved a few feet closer to the net, ripped a slapper that caromed off the defender going down to block and it curved right over the goalie into the back of the net.

I don’t think I will ever see a game quite like that one. It’s one of those games that you had to be there and still the game I talk about the most.

To all the readers, what’s the greatest game you’ve seen in person? Reply in the comments below.