It has been a very successful season in San Jose. Sharks fans look back to the beginning of the season and fondly remember many things. Pavelski’s hat tricks, Jumbo climbing the all time points lists, oh… and Tomas Hertl. The rookie and his infectious smile. Well, good news NorCal, Hertl returns to the Sharks lineup for the 2014 Stanley Cup Playoffs. In fact, he’ll be back tonight. 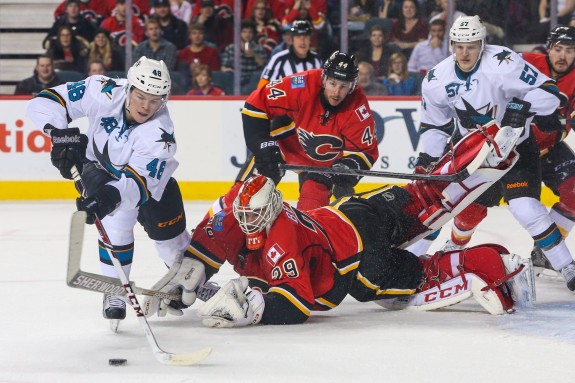 The injury was just another chapter in this growing rivalry. For the second consecutive season, the Sharks will face the Kings in the playoffs. On December 19th, a knee-to-knee hit with Dustin Brown sidelined Tomas Hertl for four months. Hertl returns tonight against the Avalanche hoping to regain his form in time for the Sharks playoff series against the very same team that injured him. No doubt the Kings captain will hear it from the fans at SAP Center all series long.  He missed 45 games and was a front-runner for the Calder Trophy. Now, he faces the likely Calder winner in Nathan MacKinnon.

The Sharks Missed More Than His Smile

Through 35 games in the 2013-14 season, the Sharks had 48 points. Earning 1.37 points per game, the Sharks had just lost the division lead to the Anaheim Ducks after a remarkable run of play from their Southern California neighbors. But the Sharks have managed just fine in the department of winning games. It is the fashion in which they have won those games that has suffered.

Up until his injury, Hertl was playing consistently on the top line with Joe Thornton and Brent Burns. The Tom Dick and Hairy line (don’t ask) was one of the most dominant lines in the league. Jumbo was scoring 1.03 points per game and Burns recovered from and injury to notch a hat trick with Hertl’s help. Since his absence, however, Jumbo Joe has fallen down to a 0.93 points per game mark and Burns has yet to find a suitable replacement for the rookie on their line.

Todd McLellan’s solution to the struggling top line was to insert miracle scorer Joe Pavelski. This has not worked. The three talents have been largely neutralized since their pairing and it is affecting the rest of the forwards. Logan Couture and Patrick Marleau have been forced to shoulder the offensive burden. The third line has sorely missed Pavelski’s leadership as well. As a result, the Sharks have failed to catch the Anaheim Ducks for the Pacific Division title.

When Hertl returns, he will bring back a furious attack that had legitimate scoring threats on all four lines. Balancing the lines out will undoubtedly give them more punch against the Shark-killer between the pipes for Los Angeles. In his time away, the Sharks goals per game dropped from 3.14 to 2.89 (3rd best to 7th best). The power play has been snuffed out too, a 17.9% drops all the way to 17.1% (15th to 20th).

Beware the youngster in the playoffs. He was surprisingly effective early in his first regular season, there is no reason to believe that he can’t recreate the magic he sparked in his first postseason.