Gary Thorne, a great baritone voice that barely hid a New England background, for me and the millions that watched the NHL on ESPN in the 1990s, Thorne is synonymous with the era. Between 1992 and 2004 this former assistant district attorney and member of the Bar of the US Supreme Court called hockey for ESPN like a prize fighter slugging a punching bag.

Those opening bars are as familiar to many of us as the opening to Beethoven’s 5th. 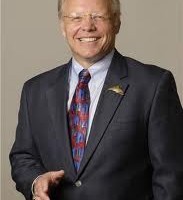 Thorne’s punctuated, staccato style, heavy with repetition, perfectly suited the continental cable broadcast: with higher definition and bigger screens, we needed a less-is-more methodology from broadcasters. It also perfectly suited the changing game: His arrival on the national stage coincided with the emergence of a game in which the biggest men- like Lemieux, Lindros and Jagr, were also the fastest, the strongest, the best.

“Oh what a magnificent goal!“

“You will not see a prettier goal EVER!”

In this call, Thorne actually forgets the one word he otherwise never forgot (“Score!”), but you can’t blame him:

Jagr’s got it—
Jagr up there—
Lemieux stays out with him along with Kevin Miller—
Jagr what a move—
LOOK AT HIM GO!

Thorne called Mario Lemieux’s final home goal prior to his first retirement in 1997:

Here he comes—
HERE HE COMES!
Mario Lemieux—
Hang on—

And he called Mario’s first home goal upon coming out of retirement:

“He hit the crossbar!”

While Thorne stumbles slightly at the winning goal in the 2007 NCAA hockey championship game, his call en route to that moment illustrates his command of hockey’s unknowable pendulum: momentum.

“And after twenty-two years…”

Thorne is glorious here, managing to make one of hockey’s greatest moments even greater:

And finally, Thorne lets nearly a full minute elapse in silence, with one exception.

Of course this is opinion only, and we all tend towards who brought us up. I heard my first hockey games living in the Twin Cities in the late 1970s, the great Al Shaver shamelessly co-opting Foster Hewitt’s “He shoots he scores!” through my clock radio, somehow managing to make even those awful North Stars teams exciting. Hockey broadcasting began humbly, with Norman Albert calling the first game for CFCA on 8 February 1923. The legendary Hewitt followed eight days later, broadcasting from the penalty box over the telephone. Everyone has his or her favorite. Who’s yours, and why?