Having played through the college level (2013 grad), yours truly has been a part of a number of hockey locker rooms. When the media aren’t around, homophobic comments are still far too common. In a male dominated, Caucasian dominated, wealthy dominated sport, hockey is arguably the toughest sports environment for a gay player. This isn’t to reverse stereotype all rich white men, but let’s be honest, as a group, they have never been trailblazers for social awareness.

While both the NBA and the NFL have had openly gay players in Jason Collins and Michael Sam, no NHL player has yet to follow suit. Unfortunately, given hockey’s culture, it wouldn’t be surprising if it were to end up being the last of the four major North American sports for this to happen. Minorities don’t exactly make up a large percentage of hockey players. This study didn’t even bother with the NHL when it came to analyzing diversity amongst the top professional sports leagues.

Ice time isn’t easy to find and it’s not cheap. Therefore, it makes complete sense for kids to flock to other sports. Perhaps the NHL needs to invest in more roller hockey programs in order to grow the game and make it more affordable to everybody. If hockey were cheaper, and spread through different youth cultures, it would do wonders to help social awareness. San Jose Sharks right wing Tommy Wingels is a board member for the You Can Play project, he talked about the difficulty of growing the game he loves.

[By the way..if you’re enjoying this post you can subscribe to our free newsletter. We’ll send our best stuff a couple times a week.]

“Hockey is an expensive sport, you see a lot of people gravitating towards the other sports because they are a lot cheaper. Basketball you [just] buy a pair of shoes and a ball. Baseball, soccer, same thing. I think it’s something as a game that we need to figure out how to get more kids involved. I’m not sure what the answer is but as a league it’s something we can work on.”

Wingels, 26, is starting his third season as an established NHLer. Before reaching the NHL, Wingels starred as college player for the Miami (Ohio) Redhawks. The Illinois native captained a team that included the late Brendan Burke. The son of Calgary Flames President of Hockey operations Brian Burke, Brendan was both a player and team manager for the Redhawks. He made numerous headlines for coming out as gay in 2009. According to Wingels, he wasn’t treated any differently than anyone else on the team.

“He just was one of the guys. If we were in the locker room working out, he was in there working out. If it was Sunday watching football with a bunch of guys getting together, he was there sitting with us. Ultimately it didn’t matter his sexuality. As I’ve said a million times it didn’t change anything about him or his relationship with anyone else.”

Burke’s story is the inspiration for the You Can Play project co-founded by Brendan’s brother Patrick. The foundation has done a lot of work to foster awareness and acceptance of all sexualities in the sports world. Local star athletes, including the Sharks’ Joe Thornton, participated in this You Can Play advertisement a few seasons ago.

There is still a lot of work to be done though, and as Wingels points out, players have to be cognizant of their actions.

“First off, hold yourself to a high standard. The culture and environment that you’re in in a locker room it’s about respecting your teammates. You have to be aware of what you say and what you do. Focus on the individual first and then if you can help others think about it, or correct them when they say something that they shouldn’t say or do something they shouldn’t do, that’s the next step.”

Hockey is known as being a “bro” sport. Lots of predominately white, “bad boy” types drinking beer and talking about girls. With that in mind, Brendan’s willingness to openly admit his homosexuality is arguably the most courageous act in the history of the sport. The goal of course though is to make coming out not be a big deal. With the type of language still used in locker rooms today, the message needs to be sent repeatedly that certain comments are not acceptable. Many players may not even be homophobic per se, but they don’t realize that what they say can take a severe emotional toll on others. 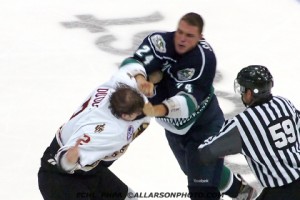 As a former player, the comment that stands out to me personally is when guys would tell teammates to “go s**k a d**k.” Those who talk like this don’t realize what they are saying. Players need to think before they speak. They need to ask themselves the question: How would I feel if my sexuality was looked down upon by the masses? When I put myself in the shoes of a gay hockey player, I can’t imagine what it would be like. As a heterosexual male, if I had teammates express to me that giving oral sex to a woman was wrong/bad, that would make me extremely uncomfortable. Having something I do in my private time being mocked and ridiculed would be incredibly hurtful. I can’t even fathom how I would attempt to cope with that.

Openly Gay Player in the NHL?

Personally, I’m not very optimistic about an NHL player coming out anytime soon. Wingels however believes his league is “on the right track” to creating an environment where every player can be themselves.

“I think we’re on the right track. The league is doing everything they can, the players are doing what they can, and the teams are doing what they can. You have a duty to make a safe environment for someone to feel comfortable if they want to come out. I think it’s great in other sports that it’s happening. The big thing with Michael Sam in the NFL was that he was going to be a big distraction. Anything I’ve seen, heard, or read, there is no distraction at all. Just goes to show, teammates don’t care. Teammates are happy for him that he can live his life openly. It’s [only] a matter of time before we have a guy in every professional sport that is openly gay.”

25 thoughts on “Homophobia in Hockey: Raising Awareness with Tommy Wingels”