As you have probably already heard, former St. Louis Blues player Barret Jackman announced his retirement from the NHL on Tuesday, Oct. 4. It is always sad when a great player hangs up his skates, but this story has a happy ending. He signed a one-day contract with the Blues so he could retire in St. Louis after playing one season with the Nashville Predators, the Blues’ Central Division rival. Now that he is officially a member of the Blues’ alumni, let’s look back on the best moments of Jackman’s 14 season NHL career.

How It All Started

This tale begins at the 1999 NHL draft, in which Jackman, also known as “Jax” by fans, was drafted 17th overall by the St. Louis Blues. A young six-foot defenseman looking for a chance to make it big in the NHL, he impressed in the WHL with the Regina Pats. He soon became the youngest captain in the history of the Pats’ organization. He played in the World Junior Championships in 2000 and 2001, winning Bronze both times with Team Canada.

At the end of his rookie NHL season in 2002-03, he won the Calder Memorial Trophy for Rookie of the Year, beating out both Rick Nash and Henrik Zetterberg. This trophy has been awarded for 79 seasons, but only 11 have been awarded to defensemen. He is also the only Blues rookie to have ever won the Calder Memorial Trophy. Former Blues players such as Martin Brodeur, Peter Stastny and Glenn Hall have won this trophy, but they were not members of the Blues when they won.

After his rookie season, he was never the same player, enduring an almost season-lasting shoulder injury. However, in 2007, he was a member of the World Championships playing for his homeland, Canada. They won gold that year.

Home Is Where the Heart Is

Jackman said this about being drafted by St. Louis:

“When St. Louis went up there and picked me, all I thought of was going to camp with guys like Chris Pronger and Al MacInnis, two of the best defensemen in the whole world. It was pretty amazing. I think I almost fell down the stairs trying to get to the floor and up to the podium.”

Ever since then, Jackman has always considered St. Louis is home. He has lived here with his wife, Jenny, who he met here, and their two kids, Cayden and Makena for the majority of his career. 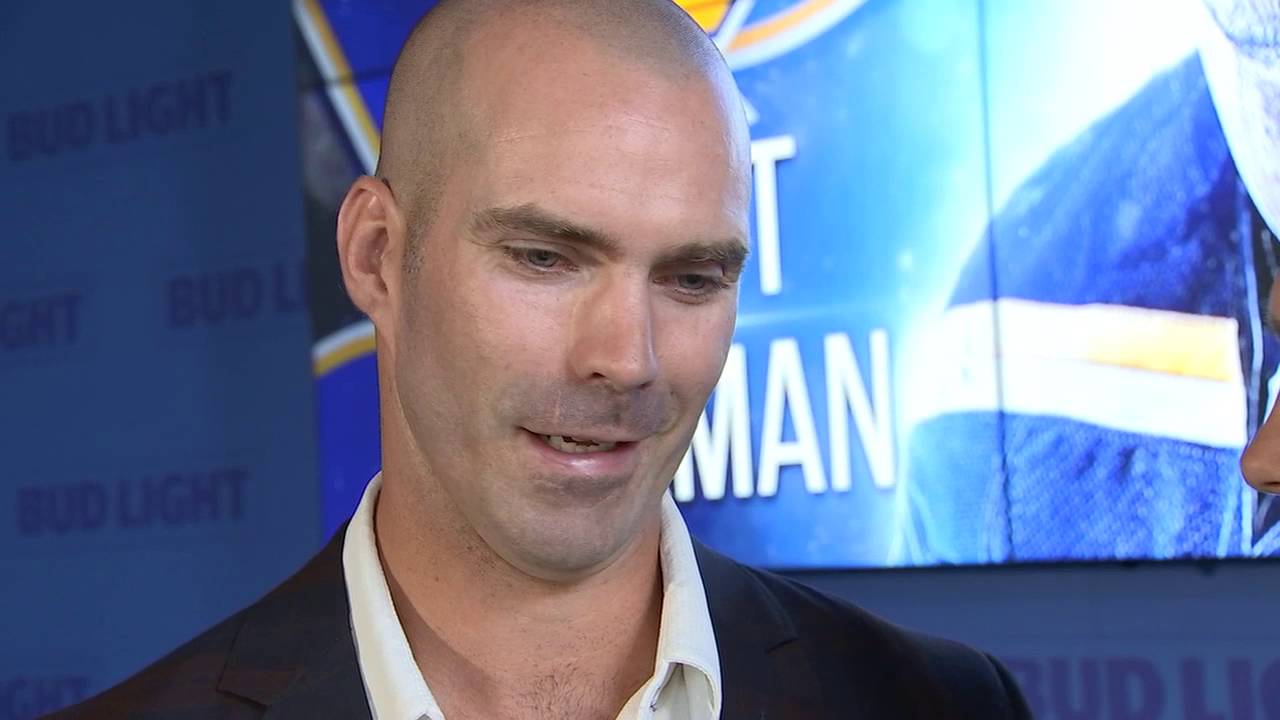 Almost everyone in St. Louis has a special place in their heart for Jackman. Many other Blues alumni came to his retirement ceremony on Tuesday, including Wayne Gretzky, Brett Hull, and Brodeur, and the entire present club showed their support as well. He shared the number five with Bob Plager, who joked, “Now in St. Louis you’ll be known as number five in the program and number two in the hearts…You’ve worn that Blue Note great, better than a lot of other players. As you know, you’re one of my favorites.” Former Blue John Kelly said, “The way he played reminded me of the Plager’s or Brian Sutter.” Former Blues fan favorite, T.J. Oshie, said that Jackman was the ultimate teammate.

Young and old Blues fans alike have grown up watching the team evolve and change management and players throughout the years. One of the things that remained the same was Jackman. He has not only played here but been involved with the community and the fans. Maybe he is not an NHL legend, but he is still a celebrity in the eyes of the passionate Blues fans out there. Have a great retirement, Jax! Here’s hoping that the Blues offer him an office position and that he stays involved with the club.

Hi, my name is Melanie Rau. I am a Freshman at The University of Missouri-Columbia studying Journalism. I am from St. Louis, so naturally I am a HUGE Blues fan and Cards fan. I am the one on the left of my profile picture. GO BLUES!