You can imagine what $107 meant to a middle-class high school kid in 1993. A paltry to sum to many, especially in 2012, it was a king’s ransom to me earned in modest tips as a bus boy.

And this was no ordinary $107. It had a purpose – a specific target looming in the distance. Like Lord Voldemort, I dare not even speak the name of my intentions lest I bring unintended consequences to my pursuit.

The object of my desire was an autographed Bobby Orr hockey stick available only by silent auction at a fundraiser for my sophomore class. At the time Mr. Orr was an executive for the old Bell Atlantic and a colleague of a classmate’s father. The father asked Mr. Orr if he would be willing to contribute the prize for the fundraiser and he readily agreed.

For those unfamiliar with the process of a silent auction it is very simple. The item is displayed, along with all the other items available at the auction, for a set amount of time. In this case, two hours. During that time anyone who wishes to bid on the item does so by simply writing their name and their bid on a sheet of paper next to the item. At the end of the auction the person with the highest bid wins the prize.

It therefore stood to reason that it might not require the entirety of my savings, but if it did I was prepared to part with it for the coveted artifact.

Bidding began slow and as such, promising from my perspective. I had determined beforehand that it was in my best interest to bring as little attention as possible to the item itself and the pace of bidding. Casually, I scoped out the competition, careful not to give away my hand or the prowess of my bankroll, and trying to look indifferent as the greatest piece of sports memorabilia I could ever own was just lying there – almost in state – with its fate unknown for the next two hours.

More than half way through the affair my first real competition made her presence known. The mother of another classmate – who I should also mention is the wife of my mom’s boss – laid down her marker with a $75 bid. The bid was a good $20 above the most recent bid.

The first hour had proceeded smoothly and this aggressive bid caught me off guard. Up until now the most anyone had increased the bid was by $5. I was not expecting this and completely overreacted like Mike Millbury when he wakes up every day.

I was now officially invested in the Yarmouth High School Sophomore Class Silent Auction of 1993 with a $90 bid on what I considered to be a priceless piece of hockey memorabilia. In my naivety I thought this bold move would scare the other bidder out.

What would she want with a Bobby Orr autographed stick? She’s probably just doing this to help the class. Once she sees someone really wants it she’ll back away and it still leaves me $17 to play with in the last 30 minutes should anyone else be foolish enough to try me.

What did I have working for me? Time, in that the auction was finite. I just had to remain patient, not drive the price up on myself and it was mine. I sacrificed my advantage.

What did I have working against me? A bidder with access to a much larger bankroll and unbeknownst to me, an unrequited girlhood crush on one Mr. Robert Gordon “Bobby” Orr.

What followed was predictable, but no less tragic. She mercifully went to $95 which prompted me to make mistake #2. I immediately went to $96 and telegraphed that I did not have the resources to compete.

It was my first real heartbreak. No girl had yet done to me what losing out on that signed Bobby Orr wooden Victoriaville had just done. And it was a public heart break – dumped for all to see with my misfortune and the corresponding drama becoming the talk of the auction. Sure I received my fair share of condolences and obligatory sympathetic head tilts, but none of it could compensate for the emotional void so freshly exposed.

As we can all attest, the tunnel of heartbreak seems endless and mustering even a scintilla of belief in a better day with better options is near impossible. However, I was about to learn that when it comes to heartbreak faith in a better day is not only warranted, but rewarded.

A few days later I received a call from my classmate with the dad who works with Bobby Orr. Apparently, Mr. Orr had inquired with her father on the success of the silent auction and his contribution. Her father retold the Greek play to Mr. Orr that culminated in my defeat.

The call from my classmate was to inform me that should I come to her house I would find a Victoriaville autographed personally to me from Mr. Orr, along with a personally autographed picture of the iconic Stanley Cup winning goal that features an airborne Bobby Orr, suspended for eternity, in the earliest seconds of glory. 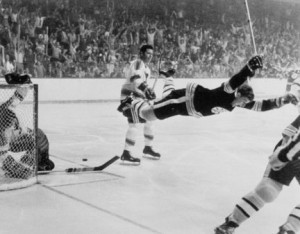 Upon arriving at my new best friend’s house .374 seconds later and in total disbelief, I was told that after hearing the tale of my woe Mr. Orr returned to the office the next day with the signed stick, the signed picture, and instructions that “it be delivered to the young man who thought I was worth his savings.”

The stick still resides wherever I call home and the picture was gifted to my father, a lifelong Bruins fan who grew up in Worcester, MA during the golden age of the Great #4, Bobby Orr.