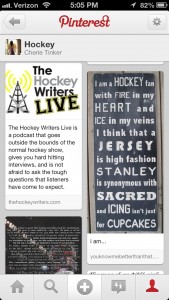 In the Pinterest of hockey fans, I thought I’d share what I’ve learned recently about the social media site that actually does cater to hockey fans. What once was thought to cater to house wives with cooking and craft ideas, Pinterest now can be your photo and video sharing site for hockey. The whole point of Pinterest is to search for things you have an interest in such as hockey and then pin them to your virtual pin board for future review or reminiscing. Very cool. 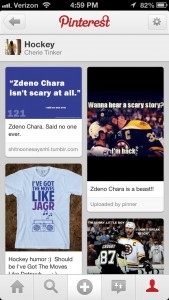 Pinterest started as an invitation only site in March of 2010, later launching an iPhone app in March of 2011 to unexpected success. Time magazine even listed it as one its 50 best Websites at one point that fall. At first the site brought in women in droves. Men saw it as a site where women collected recipes, craft ideas, home refurbishment ideas, fashion tips, and kind of ran away in a hurry. Thus leading to the creating of similar sites for men such as Gentlemint, Dudepins, Manteresting, PunchPin, etc. They all have their virtues I’m sure. You may want to check them out, but we’re talking hockey on Pinterest today. Men are coming back to Pinterest. They are finding it more man friendly. There are more options, and it is including a realm of sports including hockey that is worth giving it a second chance. 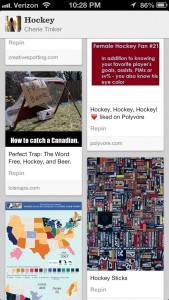 I scoured Pinterest for for all things hockey, and I found some really cool things. I found out how to trap a Canadian. You set up a hockey net, put a stick attached to a long piece of rope, put a pack of beer underneath and you lie in wait behind a tree. See screenshot. And hope for a Canadian who isn’t very intelligent. However, since Canadians invented hockey, I assume you’ll be waiting a very long time. Seeing as they’ve invented the world’s coolest sport, I have to credit them with being very intelligent. They even figured out how to get Justin Bieber to move out of the country, so I don’t think that trick will ever work. So let’s move on to more of the cool things Pinterest has to offer hockey fanatics shall we? 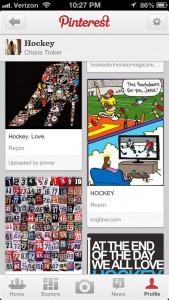 Pin the Number on the Player

My pin board has a cool pin of some of the different jerseys numbered one through ninety-nine with names of different players who wear the respective jerseys. You can pin cool videos, you can pin interesting pictures, your favorite players, there is so much you can do with your pin board. One of my favorite pins is one where an American football player is thanking a deity for making a touchdown, while said deity is watching a hockey game on television. Pinterest hockey pins are good for tongue in cheek, I’ll admit. 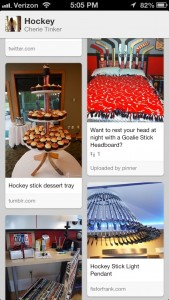 Some of the cool finds for Pinterest hockey pins are how to make a hockey stick cutting board, recycle broken hockey sticks into chairs, headboards, light fixtures, dessert trays, ice scrapers, you name you can make it out of your kids’ broken hockey sticks. It’s all on Pinterest for hockey fans. You can learn historical facts about the Stanley Cup. You can learn about the statistics of fights. There’s details about the map of the ice hockey rink. You can even learn your odds of becoming of a professional hockey player. Mine-non existent. I may not have been pro hockey material, but at least I get to write about it. That makes it all better! If you aren’t on Pinterest, find a friend who is and look up the myriad of hockey things you can pin. If you’re a hockey lover, you could spend from now until hockey season going through everything in the Pinterest of hockey fans.