It has come to my attention that, over the last several months, there is a growing sentiment of Islander fans expressing frustration with team owner Charles Wang.

Maybe he’s a more “hands on” owner than we’d like him to be, and perhaps we’ll never forgive him for waking up one morning with the idea to sign Rick DiPietro for a decade and a half.

All of these are valid points, but look around the NHL and you’ll see that Wang isn’t the first owner to make mistakes, nor is he the only one who’s too involved in hockey operations (see Ted Leonsis).

The bottom line is, for all of the mistakes he’s made, Charles Wang has done a lot of right things too.

He helped the Isles get back on the map in 2001-2002, by opening up his wallet, nabbing Michael Peca and Alexei Yashin, and catapulting the team into the playoff picture, after finishing last in the NHL the year before.

But it’s not really the on-ice improvements he’s made (because while he has made some, there’s still much work left to do). It’s the fact that he’s still here, that he hasn’t sold or moved this team, that he deserves our recognition and respect.

Look at what happened in Phoenix. The team owner was losing millions of dollars per season, and he tried to sell the team to Hamilton ON, behind the NHL’s back. He even filed for bankruptcy, doing everything possible to rid himself of, what was likely, the worst investment he’s ever made. The Coyotes are now owned by the League.

Not to be outdone are the Atlanta Thrashers, who are probably less than one week away from a move, north of the border. Their ownership group, Atlanta Spirit, have “tried” to find a new owner for the last six years, though that search intensified this season. Turns out, they found a buyer, one who would relocate the franchise to Winnipeg.

The Atlanta Spirit Group is doing everything possible not to keep the team in the current market. The ownership doesn’t even care if the prospective buyers don’t want to stay in Atlanta. They just want to put an end to this horrible mess, regardless of what the consequences of doing so are.

The kicker here, is that both Atlanta and Phoenix play in state-of-the-art sports arenas.

Wang has owned the team for 11 seasons, losing millions each year, just like Phoenix and Atlanta. He’s had to deal with a nightmarish situation, where, until recently, he wasn’t even able to make profit from several revenue streams in the arena.

He has been turned down by the Town of Hempstead, in his attempt to build a privately-funded arena and development project (Lighthouse Project), a process that dragged on for several years.

Despite all that, Charles Wang is still here, still focused on keeping the New York Islanders on Long Island.

The answer is, not many.

Charles Wang continues to push for this team to succeed in the current market. You simply cannot question his commitment to the Islanders. He’s gone above and beyond, and now, with this latest arena proposal, he’s going way beyond.

You don’t see this type of picture splashed on the Coyotes and Thrashers homepages. 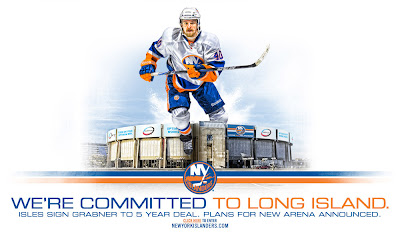 So, my request is that we stop obsessing over the mistakes he’s made, and start giving him a little more credit for what he’s trying to make happen here.