The Pittsburgh Penguins, now a perennial contender for the Stanley Cup, got off to a start that can best be described as ragtag on a good day, chaotic on bad. While some of the rust may be attributable to a long layoff, it’s actually a disparaging continuation of the end of the 2011-12 season. When captain Sidney Crosby returned to the Pittsburgh lineup late last year, the wheels seemed to be so well greased that they spun right off the axle. Has the pressure to produce Cups in a small window put head coach “Disco” Dan Bylsma on the hot seat?

The Penguins went from an offensive-minded club to a watered down version of the 1983 Edmonton Oilers in a flash. The stretch passes, the free-wheeling offense, backchecking that could best be described as circumstantial, but honestly, it seemed just down right optional. The only time forwards were making a concerted effort to go below the top of the faceoff circle was to gather in a loose puck

off another Marc-Andre Fleury save. And while Fleury was hardly the savior that he was for the Pens in playoffs past (2008 and 2009), he was hardly the goat either.

The Penguins were thoroughly embarrassed by their arch, cross-state rivals in a series that wasn’t so much hockey as it was a no holds barred, recess rumble between fourth graders and fifth.

Surely, such a miserable display would shake the organization to its core. Curiously, the Penguins were off to an uneven start with many of the same demons plaguing them as they did several months prior.

The grinding, cycling team that won the Stanley Cup in 2009 under Dan Bylsma has been trashed. In its wake lay a puzzlingly disjointed system sprinkled with desperation line and lineup changes that only add tires to the five alarm fire.

The following excerpts are not unique, these were consistent issues that were keeping the Penguins from realizing the full potential of their lineup. The selections are limited for space and time constraints. 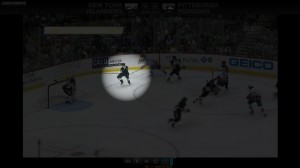 Excerpt 1: Penguins vs. Islanders – January 29, 2013. A mid-first period defensive zone faceoff is pulled back but because there is no forward support Brooks Orpik (44, lined up on the left side of the faceoff dot) cannot box out Kyle Okposo (21) from applying pressure to Paul Martin (7) creating a 50/50 puck. Meanwhile, check out the Penguins forwards…gone. Without a second thought, they are streaking out of frame. This is a tied game, a defensive zone draw and the line out for Pittsburgh is most of their shutdown/defensive line (Matt Cooke, Brandon Sutter and typically Tyler Kennedy, but here, Joe Vitale).

So, even the shutdown line cannot be troubled to help with simple defensive zone draw support. Imagine what the Evgeni Malkin line does, or, for Penguins fans, maybe it’s best not to conjure up such things. 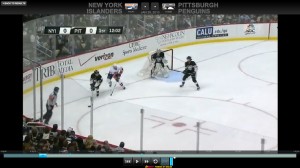 Excerpt 2: Same game vs. the Islanders just moments later. Another defensive zone draw and rookie Simon Despres is fending off an Islander forecheck. Not shown: the Penguins forwards recognizing that a rookie blueliner is being pressured on his backhand with the puck. The expectation is, evidently, that Despres should be able to make this play – though it’s an unsustainable request. Meaning, that it can happen once in a while, but it won’t work against quality teams multiple times. 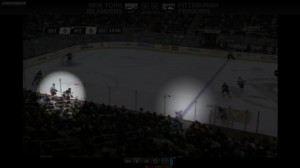 Excerpt 3: Just a couple of seconds later we get a better look on the zoom out (which is how hockey broadcasts should be viewed). Highlighted on the left is the aforementioned, but unenviably-positioned Despres, and the right in the softer light is the opponent. Not basking in the glow of rudimentary Photoshop light effects are any Penguins. Note the spacing between the Penguin forwards and the defensemen. It’s an easy pick off for any opponent to sneak into those gaps, especially if the play is read correctly. Which in this case, Michael Grabner (40) does read it correctly, seeing that a defenseman is being hounded and chased out on his backhand. He also knows that he has a 3-on-3 behind him if he should somehow not come up with this puck on the pinch.

Late in the first period, the Penguins yield the first goal of the game and of the career of Casey Cizikas. Again, issues with improper puck management and spacing play a part but also, too, does the handedness of the defensemen given the situations they are put in. Long passes usually will require the boards at the NHL level; as a result, having two of the same handed defensemen on the ice will assure that one defenseman is likely to have to exit the zone on his backhand – a less than ideal circumstance.

As we see from the beginning of the clip here, the Penguins lack of support creates an easy decision for even a single forechecker. That is, force the puck to the defenseman that will need to be on his backhand to exit up the boards. The Penguins top pair to start the year consisted of righties Kristopher Letang and Matt Niskanen and the second pair, as we see here, is lefties Paul Martin and Brooks Orpik.

At the 0:11 mark of the video we see the forecheck pressure of the Islanders force the puck to be reversed behind the net. This reverse is a common theme for the Penguins when they break out, though it is time consuming, cumbersome and largely unnecessary with proper adjustments.

In this case, Martin is handed a grenade by Orpik and, ignoring the guess by Fleury, (which looks genius if it works, silly if it doesn’t…here it’s the latter, of course) it explodes on him.

The handedness issues extended into the forward lines as well. A career left winger and lifelong left-hander Matt Cooke was stuffed into a right wing role. Tyler Kennedy, a center in his junior days but a right winger almost exclusively at the NHL level, was placed on the left side despite being right handed. Two players that live on the boards, that thrive on the cycle and board play, are forced to try to play pucks on their backhand and it was clear in a couple instances against the Islanders and before that against Winnipeg that they were handcuffed by the awkward placement. Off-wing shooters can be effective on high-flying offensive lines, but on depth lines that rely on board play, it’s generally a disadvantage and is tough for veteran players to overcome.

Dan Bylsma’s team created offense from below the goal line when he took over in 2009. As time has passed, the play is created higher in the offensive zone, even though that’s a riskier area to be creating offense from in today’s NHL. Additionally, the makeup of the team is that of swarming, grinding, board players. Chris Kunitz, Pascal Dupuis, Tyler Kennedy, Matt Cooke and to a far lesser extent, Eric Tangradi, are not dynamic offensive players that think the game at an advanced level offensively. They are largely static producers that do very good work on the forecheck and on the wall, converting chances at a steady rate.

They all have limitations that largely preclude them from making these advanced plays in the danger zones in the middle of the ice. Without naming names, some of the above players don’t have the vision, hockey sense or ability to cleanly accept passes and as a result, they struggle and the team struggles with turnovers abound.

The power play – another article in its own right – also tries to set up high in the zone and asks too much of some that aren’t capable and too little of those that are over-qualified. The issues are systemic, not personnel related. This is not identified by the coaching staff; instead, square pegs are hammered into round holes – thus, the high turnover rate of power play point men over the last few seasons.

Fast forward to Saturday afternoon, a matinee against the New Jersey Devils is afoot and Penguins fans literally have no idea what to expect out of the team. Many, though, must have been pleasantly surprised by the effort by both player and coach in the contest.

At press time, the archived footage was not yet available for chopping, but the Penguins played a much more structured game and because of their skill level, they were able to transition more succinctly and perforate the Devils for a fistful of tallies. The forwards collapsed further down and maintained proper spacing up to and including the time that the puck was retrieved and possessed. This shut off passing and shooting lanes defensively, while creating shorter, easier passes for the Penguins to break out with. On the forecheck, they only applied great pressure to pucks that they believed they could win, otherwise, they largely sat back in a passive structure: the basic 1-2-2 was favored.

The Penguins went from the 1983 Oilers to the 1983 Islanders in a short span. Instead of relying on long stretch passes, they relied more on triangular formations offensively and defensively to create support channels on both sides of the puck. These controlled breakouts did not allow for the opponent to penetrate the spacing between puck distributor and puck receiver. The possession time for the Penguins in the game was bordering on obscene and the Devils were held to just 16 shots in the entire contest and went 0 for 13 on even strength tries. Pittsburgh had over twice as many even strength shots and scored five times.

Is this a sign of things to come or a mere mirage of competency? After three years of disappointing finishes in a row, Dan Bylsma and his staff have a chance to turn hot seat into hot streak if they can string together an encore performance of Saturday afternoon’s presentation.

Hockey writer for Hockey’s Future. Certified USA Hockey Coach. NHL Researcher for Out of the Park Developments’ Franchise Hockey Manager ’13. Above all, a dedicated student of the game.

1 thought on “Is Dan Bylsma On The Hot Seat in Pittsburgh?”