With a full no-trade clause, Carolina Hurricanes left wing Jeff Skinner was sitting pretty in the driver’s seat, able to choose his next NHL team. Though he’d hit the 30-goal mark three times, the young winger had fallen out of favor with ‘Canes general manager Don Waddell. He had one year remaining on his contract with a cap hit of $5.725 million.

When given the chance to leave, the 26-year-old, former Calder winner, three-time 30-goal scorer chose to go to the last-place Buffalo Sabres. The team that missed the playoffs for the seventh straight year. The team that had the worst goal differential in the league. The only team that failed to score 200 goals last year. None of that concerned him too much. Instead, Skinner saw a bright future.

Skinner, a Toronto native, gave a thumbs-up to the trade. The Sabres acquired his services in exchange for Cliff Pu, a 2019 second-round pick and third- and sixth-round picks in 2020.

Excited to Join the Sabres

During Skinner’s conference call with Buffalo media on Friday, he was quick to mention the Sabres’ young core. He mentioned his new teammates Jack Eichel, Rasmus Dahlin, Casey Mittelstadt, Sam Reinhart and Rasmus Ristolainen. “The young group of players they have, the young core is exciting,” said Skinner. “I’m excited to join those guys and be a piece of the puzzle.”

Skinner sounded very excited to join Eichel. Though he doesn’t know him personally, Skinner has heard a lot about him from Hurricanes defenseman, Noah Hanifin. It’d be surprising if Eichel and Skinner don’t start the season on the same line together. Conor Sheary had been projected as Eichel’s left winger up until the trade.

“He’s obviously one of the top centermen in the game right now,” said Skinner of Eichel. “I’m so happy to be on his team instead of against him.”

Even if Skinner doesn’t start on Eichel’s line, he’ll likely be centered by rookie Casey Mittelstadt. Both are significant upgrades over Skinner’s main centermen in Carolina, Victor Rask and Derek Ryan. He was still able to put up 24 and 37 goals over the last two seasons.

A Fresh Start in Buffalo

The only team with a longer playoff drought than the Sabres is the Hurricanes. They’ve missed the postseason nine straight seasons. The organization is in a complete overhaul mode and Skinner’s name has been swirling in trade rumors for a while.

He was all in.

He thanked his agent and the Hurricane front office for getting a deal done. Now, he’s looking ahead. “It’s going to be a fresh start,“ said Skinner, who has only played for the Hurricanes. “It’s going to be my first time going to a new organization and meeting all the new staff and a bunch of new teammates. It’s certainly something I’m looking forward to.”

Sabres general manager Jason Botterill has stayed true to his stern words and steaming anger from his end-of-season press conference. Since the season ended, he’s turned over the roster, desperately trying to infuse some new life and energy.

Sheary is a nice acquisition, but Skinner instantly becomes the best left-winger on the Sabres roster. The fact that Botterill landed him without giving up a player that’s skated a single shift in the NHL is wildly impressive. Most thought the Sabres would have to part with at least one of their first-round picks over the next two years.

Now, instead of waiting and hoping for players to develop, such as Nicholas Baptiste, Alex Nylander or Justin Bailey, the Sabres have one in hand. And he’s an instant upgrade.

Having Goals and Scoring Them

The Sabre anemic offense cost them far too many games last season. They had the third worst record in one-goal games. And have been among the league’s lowest scoring teams at even strength the past few seasons (better than only the Vancouver Canucks and Vegas Golden Knights).

“The NHL now is so tight,” Skinner said. “I think there’s so much parity. So many games are decided by one goal.”

Botterill has high hopes that Skinner can help the Sabres be on the winning side of these contests. “What gets me excited as a general manager is we’re at least giving our coach options to put out lines that are going to hopefully contribute offensively,” said Botterill during a conference call. 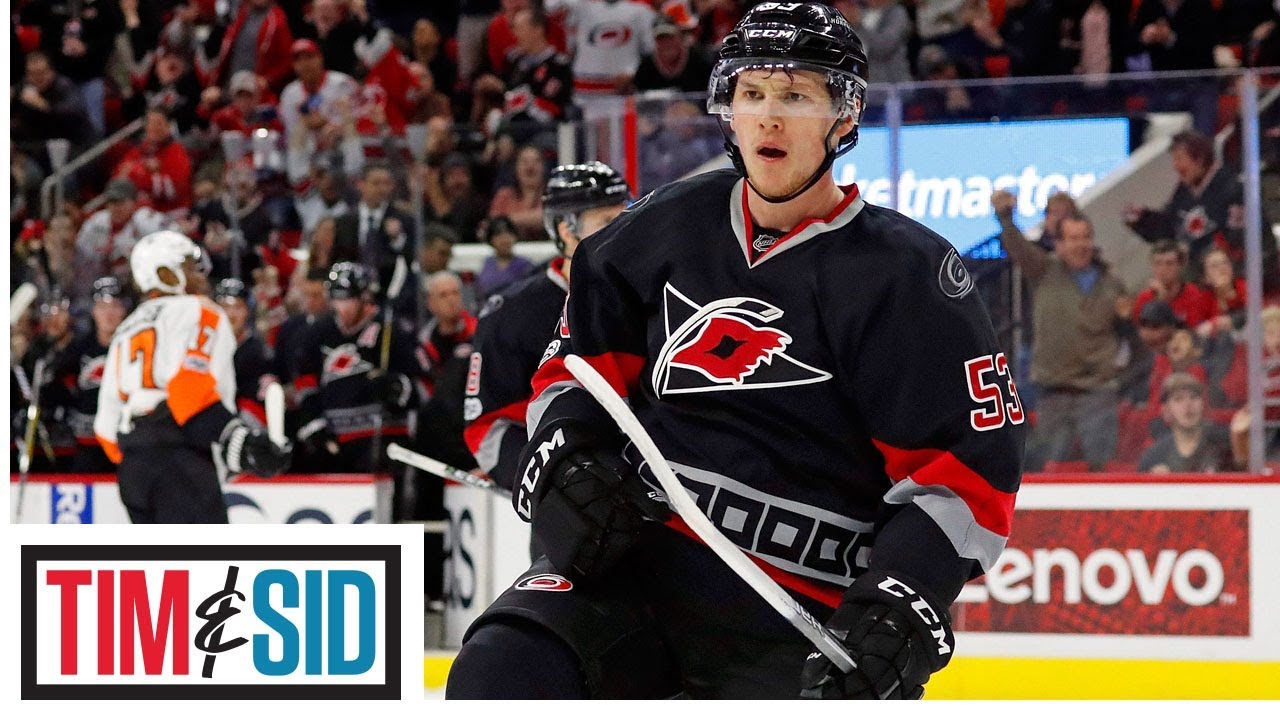 The Toronto Maple Leafs, Edmonton Oilers, New Jersey Devils and Colorado Avalanche all made the jump from basement dwellers in the standings to the playoffs the following year. If Botterill has his wish, his team will follow in their footsteps.

Skinner’s deal goes through the end of the 2018-19 season at $6 million annually. After that, he’ll become an unrestricted free agent. If he puts up decent numbers this season, his next contract will rise accordingly. His production is in line with $7 million deals that were recently signed by James van Riemsdyk and Evander Kane.

Skinner isn’t rushing into signing a new contract; his immediate focus is to prepare the season that’s on the horizon. “I haven’t really thought about it,” Skinner said. “Honestly, I’m just excited to start the season. That’s where my focus is and where it’s going to be for the next little while.”

“Our focus with Jeff is to make this transition into Buffalo as easy as possible for him,” said Botterill, “for him to get settled in, focused in on the start of the season, go through the process here for him to get to know his teammates, get to know Phil (Housley), get to know myself, and we’ll talk about things such as extensions or contract down the road.”

With Jason Pominville and Matt Moulson contracts coming off the books next summer, the Sabres will have money available to spend. If Skinner isn’t a good fit with the team, Botterill can always flip him at the deadline for a similar grab to what they spent to get him.

For now, it’s another dose of summertime excitement. Skinner is excited to join his new team and settle in.