The 2016 Prospects Challenge for the Buffalo Sabres, New Jersey Devils, and Boston Bruins is taking place at the HarborCenter in Buffalo, New York. Today, they’re entering their third and final day of the Challenge, and in last night’s game, we saw New Jersey’s top prospects face off against Boston’s, which showed that the NHL may have another pair of rivalry teams in the near future.

The way everything played out last night revealed a lot about each team’s identity. After all, before players get drafted, they’re scouted, and scouts look for guys who obtain a similar style-of-play to their own team — it simply increases the chances of that draft pick fitting in the lineup. While some players seemingly enjoy to push and shove, others seem to enjoy being focused on the game at hand, and Steven Santini is one of these focus guys.

Santini is one of New Jersey’s defensemen who saw a lot of ice time in last night’s match, and he’s also on the cusp of entering the NHL on a full-time basis. Drafted at No. 42 in the 2013 NHL Entry Draft, Santini showed the Devil’s that he’s ready to take the next step in his career. He wasn’t the only defenseman being watched, though, as close eyes were also on Joshua Jacobs, another up-and-coming New Jersey defenseman.

Jacobs at the Prospects Challenge

The 6-foot-2, 192-pound defenseman was drafted by the New Jersey Devils at 2014 NHL Draft, in the second round at No. 41, and currently, plays for the OHL’s Sarnia Sting.

Although New Jersey’s prospects weren’t victorious in last night’s game, Jacobs gave the Devils a stellar performance and showed them who he was by implementing his player identity on the ice.

“It was a tough game out there,” he told The Hockey Writers. “They came out flying and everything like that. It was a hard game — just trying to keep it simple, trying to help out as much as possible.”

In this one-on-one interview with Jacobs at the Prospects Challenge, he shared with The Hockey Writers a little bit about his role with the Sting, and how that’s helped him create an identity for himself at this year’s Prospects Challenge.

“I’m a two-way defenseman,” Jacobs said. “I try not to get too much into offence — it’s a lot of take away from my defence… I just want to get pucks in net. I want to be a strong defenseman in the corners, and block a lot of shots. In Sarnia, that’s what I was. It’s definitely defined my role here, and it’s definitely helped me out.”

Last year, Jacobs had an excellent playoff season with the Sarnia Sting. Sometimes this can happen because of a role change, but it can also happen because some players just perform better when the pressure’s on. 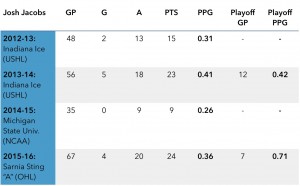 In Jacobs’ case, it seems that it might have a little more to do with the latter.

“It’s playoffs – it’s a whole other level,” Jacobs told The Hockey Writers. “Taking that into consideration, I probably pushed the pace a little bit more… we were down 3-1, so we had really nothing to lose. We had to come together as a team, and try to play our best — and for myself, just trying to play individually really well, so I thought it was a good first round. It sucks that we were out, but other than that, I thought it was a good role play from the season transition to the playoffs.”

Jacobs spent the last season playing with Pavel Zacha, another player drafted by the New Jersey Devils. Zacha spent last season on the penalty kill and was named best penalty killer in the western conference by coaches. Their experience playing together could have an influence on Jacobs’ likelihood of testing out a penalty-killing role in the upcoming season.

“I’ve always been a big penalty killer my junior career, and in the USHL, and in College, playing big minutes on the PK (Penalty Kill),” Jacobs said. “I mean, if I had a choice of playing on the PK or PP (Power Play), it’d probably be the PK. I just like to go out there and block shots… and box out guys. I think that’s a huge strength of mine, and with Pavel Zacha out there, we were real good in Sarnia. I think we had one of the best PK’s in the league, so it definitely helped that he was out there with us.”

In terms of playing on the power play, Jacobs is already doing that.

“With Sarnia, I was on the second PP,” he said of the Sting’s second power-play unit. “They liked the first PP – they were really hot, and we had a lot of guys like Chychrun, Zacha, Konecny out front, and Matt Mistele, who was actually out here playing tonight. They have a lot of deep guys playing in the power play unit, but other than that, I got my chances out there. We had a couple of goals, a couple of assists… it was a good win.”

Having experience on the penalty kill, and on the power play is all part of a player’s defined role with his team. It can also be part of his player identity, and having a strong player identity is how players get promoted to the professional rankings. Gaining experience on the penalty kill and power play is quite valuable for young prospects looking to break through to the NHL level, and that’s what the Prospects Challenge is all about. It’s about giving players an opportunity to show their prospective NHL team why they should be promoted to the NHL, and how they can help out in their lineup.