On this date, Feb. 6, 2000, Wayne Gretzky’s #99 was officially retired permanently by the NHL, in a pre-game ceremony before the All-Star Game in Toronto.

In honour of that historic event in NHL history, we have pulled this article from the THW Archives to see if it generates the same debate that it did when it was first written by former THW contributor Drew Weber on Aug. 13, 2015.

I can hear the rage in the comments already…

Wayne Gretzky is commonly considered the greatest hockey player the world has ever seen. During his 20 seasons in the NHL, he won four Stanley Cups and set countless records for the league, many of which may never be broken. He scored 215 points in a season, 50 goals in 39 games, 12 consecutive 40-goal campaigns—all accomplished by No. 99. It seems impossible to think that somebody could be better than him.

In 2005, the Pittsburgh Penguins drafted Sidney Crosby first overall. He became an immediate superstar after scoring 102 points in his rookie season, despite being on a bottom-feeding team. Since then, he has won a Stanley Cup with the Penguins and two Olympic gold medals with Team Canada. ‘Sid the Kid’ is a force to be feared.

But could this modern star be better than the Great One? We will look at statistical evidence to find out.

Now before you take me to the hockey gallows and use my remains to work on stick handling, I want you to just hear me out. I am in no way a huge Crosby fan; I live on the west coast, so I rarely get to see him play. But by looking at their point totals and accounting for the times that they played in, you can see that Crosby is not that far off in production when compared to Gretzky. Don’t blame me, blame the math.

For initial comparisons, Gretzky recorded an unreal 894 goals and 1,963 assists in just under 1,500 games. Crosby, on the other hand, has earned 302 goals and 853 points in 627 games. At first glance, it appears Gretzky blows the 27-year old out of the water. However, comparing players from different eras is not that simple. 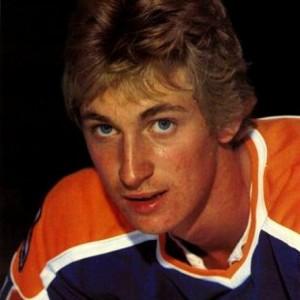 The Great One reigned in the 1980s and 1990s while No. 87 skates in modern times. Though they may not seem that far apart, so much has changed in that span—the salary cap was implemented and goaltending equipment has been adjusted. These changes have significantly altered goal scoring in the NHL.

Here’s where the evidence really comes through.

Over Gretzky’s 20 seasons in the NHL, the league averaged a monstrous 3.50 goals per game. During Crosby’s career though, that same statistic fell to just 2.83 goals per game. This means that players in the modern era score 19 percent less than those in the 1980s and 1990s. If it is harder to score, then it is harder to get points. 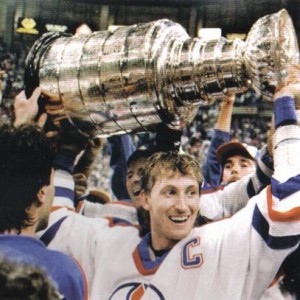 So what if No. 99 played in today’s time and suffered a 19 percent loss in his point totals? As it turns out, he would have accumulated 724 goals and 1,590 assists throughout his 1,487 game tenure in the NHL. Even though these are still remarkable totals, this is significantly less than the numbers he posted during his time.

Through these adjustments, we can see that Gretzky would barely outscore Crosby, but would still beat out the modern star in average points per game. The NHL’s difference in average goals per contest between the 1980s and the 2000s really skews a player’s statistics when trying to compare skaters from two different time periods, though the Great One still comes out on top.

What it comes down to is assist totals, which could very well be impacted by the salary cap. Before the cap was implemented, assists were presumably easier to rack up because the team around you could be as stacked as your general manager and owner wanted it. With skilled shooters filling your lineup, setting someone up for a goal would be a whole lot easier than it would be for people that you had to obtain for a bargain.

I agree that it is impossible to tell how Gretzky would have performed in today’s game, but using these metrics is the best assumption we have. Based on this data, Crosby would have kept pace with Gretzky in the goal scoring category, though assists would have put him far behind. The effects of the salary cap are unmeasurable, but are worth noting when considering intangible impacts.

The primary reason Crosby isn’t heralded as the next Great One is because of his lack of assists and because people don’t consider the eras the two played in. Scoring was significantly higher in the 1980s and teams could load their rosters as long as the club could afford it, but the sheer size of the face-value statistics blinds people to what they equate to today. It’s like when your parents say they made 25 cents an hour at their first job but neglect to tell you that 25 cents then is the same as $8.50 now. The statistics are not equivalent.

I will admit that Crosby has not had the same impact on hockey that Gretzky had in his time. No.99 helped make the sport popular in California and changed the way the game was played. He would single-handedly fill arenas because of all the hype he created. Sid is just really, really good.

Crosby may not be able to overthrow Gretzky as the next Great One, but he is certainly closer than many give him credit for. Plus, he still has many years left in his career to improve his statistics. One thing is for sure though, we could very well be witnessing the true Next One. Do not take it for granted.