The Toronto Maple Leafs are 33 days away from the NHL Trade Deadline and according to James Mirtle, they have begun to gauge interest in some of their players. So with that, I have decided to look at every player currently on the Leafs roster.

The goalies and defense have already gotten their turn and today the left wingers take the spotlight. Now, with the forwards, I’m going with the official positions of the players as they appear on the Maple Leafs website. So with left wingers, as will see, the Leafs only have two natural left wingers on their roster with two of them currently up from the Marlies.

Clune seems to be the Leafs representative when it comes to talking about whether fighting belongs in the game. Other than that, he seems to be nothing more than an injury call-up when they need him. It was the Toronto Marlies that initially signed him before the Maple Leafs signed him to two-way deal.

While Shawn Matthias is getting the first chance at filling James van Riemsdyk’s spot on the first line, Leivo was called up when the injury occurred. He has been one of the best players for the Marlies this season, scoring 11 goals and recording 19 assists  for 30 points in 39 games with the team. He was even named to the AHL All-Star Game.

With the Maple Leafs, he hasn’t really gotten the same chances that he does with the Marlies. The Leafs should give him the chance to play in the top six to see what he can really do. He should get a bigger chance when the Leafs start trading away players before the Deadline. For now, he’s probably not too far from returning to the Marlies with Nick Spaling returning from injury. 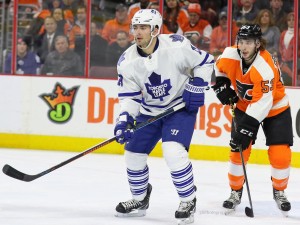 Other than missing five games, Lupul is enjoying a relatively injury-free season. In fact, if Lupul doesn’t miss another game this season, he would play in 77 games. That would be his highest total while wearing the Leafs uniform, eight games higher than his previous season-high.

That being said, his offensive game hasn’t been the same since that injury absence. Since December 15, he has only three goals. Now, two of them have come in the past four games, so hopefully he can turn things around. What needs to change is his assist totals. He hasn’t registered one since November 7 against the Washington Capitals.

With those totals, it’s unlikely another team would take on Lupul’s two remaining seasons at a cap hit of $5.25 million. Would the Maple Leafs consider buying him out in the off-season?

Well, if the guy who hacked the TSN 1050 Twitter account had been right, JVR would be property of the New York Rangers. Alas, it was not true and van Riemsdyk remains with the Maple Leafs. Unfortunately, he is on the injured reserve at a time when the Leafs could really use his scoring.

JVR is still more than a month or so from returning to the lineup. He’ll probably do that with the Leafs since it will take a massive return to pry him from Toronto’s hands.

If the Leafs do make any additions at the deadline, perhaps they should add a bit more depth on the left side. With the amount of centers they have, they could afford to deal some of them for that. Of course, with the Leafs wanting prospects or draft picks in return, who really knows if the Leafs will get more help other than call-ups from the Marlies.