For the first time in many years, the Toronto Maple Leafs are playing meaningful games in the month of March. For a team at the beginning stages of a full-scale rebuild, contending for the playoffs so soon is no easy feat to accomplish.

The Leafs are kept competitive by the play of numerous superstar rookies like Auston Matthews, Mitch Marner and William Nylander. All three have made significant strides in their rookie seasons that have seen them capture the hearts of Toronto sports fans through their record-setting play.

Not to be forgotten is Frederik Andersen, the former Anaheim Duck, who has provided the Leafs with a steady presence in net. Toronto teams of the recent past have lacked that crucial bit of consistency between the pipes, but Andersen seems determined to see that trend come to a full stop.

With less than ten games remaining in the year, every point is extremely valuable as the Leafs look to shock the hockey world and make it to the postseason.

Fans knew that Matthews was a special player with unimaginable talent. He played his draft year with a men’s team in Switzerland, a route never before taken by an NHL draft prospect. That unorthodox experience seemed to pay off for the Amercian, who was subsequently taken first overall by the Leafs.

The big pivot scored four goals in his NHL debut, the only player in the history of the game to accomplish that feat in the modern era. He’s a complete player who is able to make excellent plays no matter what zone he’s in.

The scary thing about Matthews is that he’s still a teenager. He’s arguably the Leafs best player night in and night out and fans are salivating at the thought of him five years older and with more muscle on his frame.

Matthews is able to beat you so many different ways in the offensive zone. He’s extremely hard to push off the puck and has a deceptively fast and hard shot. He also has a nose for the front of the net and has done excellent work this year by corralling rebounds in the slot and sliding them home for goals. 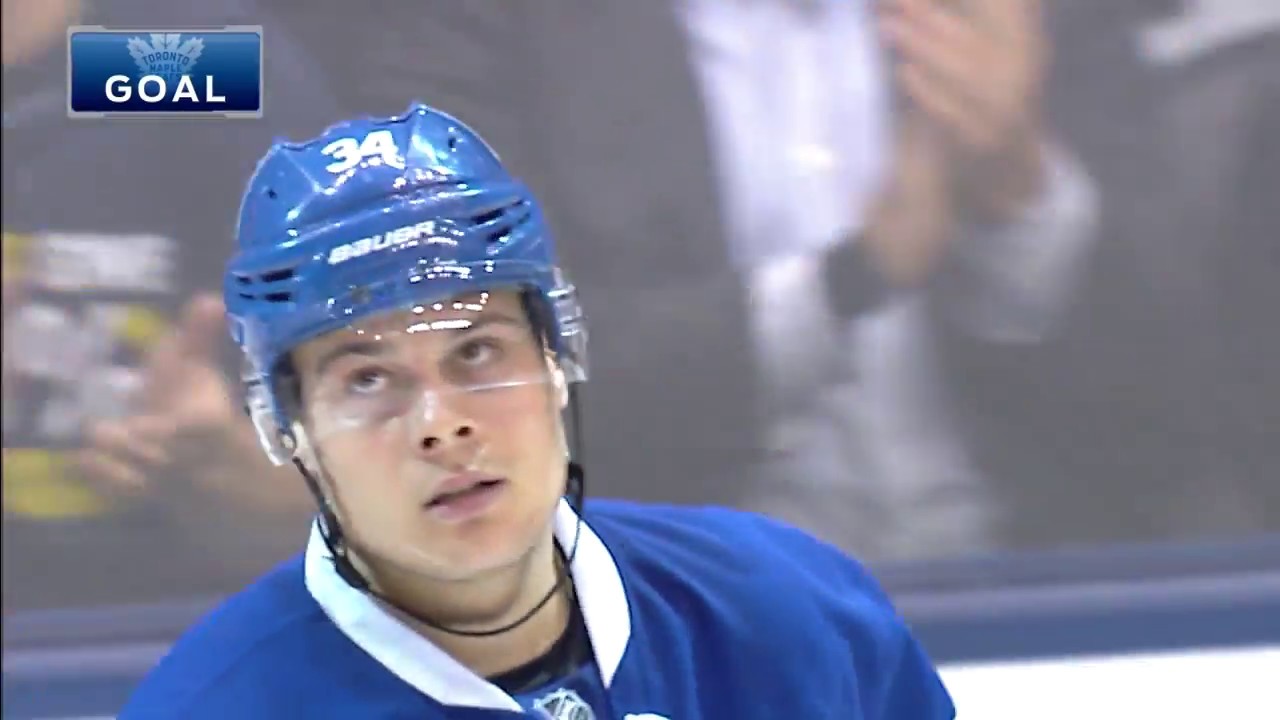 Matthews has been chasing history since he first put on the blue and white sweater. Wendel Clark, the only other first overall draft pick in Leafs history, scored 34 goals his rookie season. That record has stood since 1985-86.

The history books will now officially need to be rewritten, as Matthews scored his 35th goal of the season which helped lead the Leafs to a huge two points against the Florida Panthers.

It’s a gigantic accomplishment for the young center, who still has seven games to add to his total. He’s gotten hot again at the right time and the Leafs will need him to continue playing his best to have a shot at the postseason.

Most of the Leafs rookie talk this year falls around the big three, the aforementioned Matthews, Marner and Nylander. These accolades are all justified of course, as all three have carried the Leafs offense this year.

Lost in the shuffle of the exciting season is Connor Brown. The former Erie Otter is quietly going about is business and has nearly reached the 20 goal plateau in his first full year of NHL action. He sits at 18 goals and 33 total points and has been a valuable contributor wherever Mike Babcock slots him into the lineup.

He’s found some great success alongside Leo Komarov and Nazem Kadri on a line that can score but is also used to shutdown the opposition’s top skaters. He’s also a vital presence on the penalty kill, a trait that Babcock especially values.

Brown is in a unique position. He’s able to put his work in without the full gaze of the sometimes overwhelming Toronto media. He’s proven to be a versatile addition to the Leafs young crop of players and should only get better as he learns the game at the NHL level.

If you haven’t had the chance to check out Kasperi Kapanen with the Toronto Marlies this year, you have missed something great. The young Finn has been an absolute force this season and is a point a game player in the AHL with 43 so far this year. He also missed significant time due to injury, so those totals could theoretically be substantially higher.

Kapanen was acquired as part of the trade that sent scoring winger Phil Kessel to the Pittsburgh Penguins. Kapanen took a little while to find his footing, but once he was comfortable, he began to show why the Leafs wanted him as part of the transaction.

Kapanen’s greatest asset is his skating. Without a question, he can absolute fly down the ice. He has tremendous offensive upside and is also a valuable penalty killer, where his speed gives the opposition fits. A solid comparable is Michael Grabner this year with the New York Rangers and all the breakaways he gets on the penalty kill.

I don't want to get ahead of myself here, but I'm pretty sure Kasperi Kapanen is faster than Connor McDavid. pic.twitter.com/ZulEPfscqa

The former 22nd overall pick managed to get into nine games last year with the big club, where he made a great impression despite not scoring any points. He has an opportunity to help the Leafs down the stretch run this year and will see regular minutes on the fourth line and penalty kill.

The Leafs have a bevy of young and skilled players waiting in the wings. Kapanen is right near the top and should see significant time in the NHL next year.