One of the hallmarks of the “new” National Hockey League is the shootout.

For the last seven seasons, many skaters have dazzled with their silky mitts and slick shots, adding a whole new dimension to the highlight reel. But the greatest shootout in NHL history will be remembered for a fantastic goal from the unlikeliest source.

On November 26, 2005, the New York Rangers hosted the Washington Capitals in a Saturday night game at Madison Square Garden. Two months into the season, Tom Renney’s Blueshirts were rolling, while Glen Hanlon’s Caps were reeling.

The Rangers had won four games in a row entering the contest with Washington, and after seven straight non-playoff seasons, felt that they were turning the corner and heading in the right direction behind Jaromir Jagr and rookie goaltender Henrik Lundqvist. 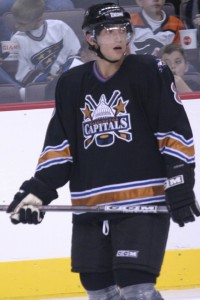 Although the Capitals were struggling, they had a rookie who was blazing a trail through the NHL, Alex Ovechkin.

On this night, the Rangers opened the scoring. Right wing Jason Ward scored a shorthanded goal with 2:44 remaining in the game’s opening period, and fellow right wing Jed Ortmeyer gave the Blueshirts a two-goal cushion with a tally 14 seconds into the middle frame.

However, the Capitals responded with two goals of their own in the second period. Chris Clark cut the deficit to one goal, and Brian Willsie beat Lundqvist with a slap shot from the right circle to tie the contest.

The game would remain tied through regulation, with Lundqvist and Capitals goaltender Olaf Kolzig holding down the fort. Neither goalie relented in the extra session, and the contest would be decided in a shootout.

Ovechkin opened the shootout for Washington. The 20-year-old Russian made a deke to his forehand, but couldn’t put it past the 23-year-old Lundqvist.

Both teams scored in round two. Capitals center Andrew Cassels beat Lundqvist on the stick side to open the scoring. In the Rangers’ half of the round, center Michael Nylander slowly skated in on Kolzig, and roofed a backhander over ‘Olie the Goalie’s’ glove to even the score.

From there, the goaltenders took over. Kolzig made two spectacular saves on Jagr and Petr Prucha in rounds three and four to keep the Capitals alive. Washington looked to have the shootout sealed in round six when Willsie put a wrist shot over Lundqvist’s glove and in off the crossbar.

With the Rangers needing a goal, Renney sent out Ville Nieminen. The Finnish forward delivered, slipping a wrist shot in between Kolzig’s arm and body to tie it again.

Once Nieminen scored, both sides realized the uniqueness of their situation. “At that point in time, we started to feel we were looking at something pretty special,” Renney said. “We sat back and watched as the event unfolded.”

As each forward kept shooting and missing, the goalies felt the pressure as well. “I started to think it would never end,” Lundqvist said.

“It’s mano a mano, you against them,” Kolzig explained. “I just wanted to rise to the occasion. I wasn’t even thinking about our guys (who were shooting). I was just trying to do my job.”

The Caps’ netminder caught a break in round 12. Ortmeyer made a pump fake with his leg and a deke that had Kolzig moving left to right in his net. However, Ortmeyer couldn’t control the puck, and the shot never went on net.

In round 14 of the shootout, Washington broke the tie. Defenseman Brian Muir snuck a wrist shot between the right arm and body of Lundqvist to give the Capitals a 3-2 lead in the shootout. Running out of options, Renney elected to use defenseman Jason Strudwick to try to tie the game.

“I never really thought I would have to shoot in a shootout,” Strudwick recalled. “In fact, I think some of my teammates were already in the dressing room,” he joked.

But Strudwick surprised everyone in the building. Skating straight in on net, Strudwick simply fired a wrist shot that eluded Kolzig the same way that Muir’s attempt had beaten Lundqvist. As big as that surprise was, none of the 18,200 in Madison Square Garden anticipated what would happen next.

After Lundqvist stopped Matt Bradley, Renney sent Marek Malik out to shoot. Malik, who had 27 career goals in parts of ten NHL seasons at that point, hardly fit the bill of a goal scorer.

Kolzig admitted after the fact, “I was thinking about who they were going to use after Marek.”

Malik skated in on Kolzig and made it seem as if he was going to shoot on his backhand. Instead, he put the stick between his legs, and roofed the puck over Kolzig’s right shoulder.

As the Garden erupted, Malik glided back to center ice, raising one hand in the air. At the Capitals end of the ice, the only thing a stunned Kolzig could do was look back in disbelief.

While the Blueshirts celebrated, MSG color commentator John Davidson made this point about the shootout: “The whole idea of the shootout was to entertain the fans, and they got entertained here.”

Fifteen rounds, a circus-like game-winning goal from the unlikeliest of goal scorers, and excitement among players and fans alike. All the reasons why a Saturday night in November of 2005 produced the greatest shootout in NHL history.