A Google search on Mitch Marner tells us he’s one of the Toronto Maple Leafs most talked about assets. Among the sea of conversations regarding where he’s going to be playing in September, there’s some pretty convincing evidence he’ll be playing with the Leafs.

At the 2016 National Junior Evaluation Camp (NJEC) in Plymouth, Michigan last weekend, Mike Babcock, Head Coach of the Toronto Maple Leafs watched the Canada versus Sweden game on August 5th – the game Marner was playing in. During an intermission, Babcock talked to reporters about Marner’s performance so far, and his chances of playing for the Leafs this year:

…He’ll have a real good chance to make the Leafs…

This was just one of the comments he made about the young prospect. Since this is such a popular topic of conversation, let’s take a closer look at some of the contributing factors to Marner’s likelihood of playing for the Toronto Maple Leafs this upcoming season.

There’s no rush to put Marner on the Leafs’ roster, and therefore, there’s no reason for Babcock to force his hand in the matter.

When the Leafs are drafting prospects, they’re not looking for guys with an immediate impact, and that’s become evident in their presence at recent NHL Entry Drafts.

In fact, if we look at the Toronto Maple Leafs’ Draft history since the Shanaplan was implemented, we can see distinct patterns:

Pattern 2: They’re selecting forwards in earlier rounds then they are defensemen.

Pattern 4: Both forwards and defensemen have an average body mass index (BMI) of roughly 25.

Comparisons made between Leafs’ prospect forwards, and defensemen from the 2014, 2015, and 2016 Draft classes reveal these differences. On average, defensemen are two inches taller and weigh 11 pounds more than forwards. However, they both have an average body mass index (BMI) of 25.1 (forwards), and 25.3 (defensemen).

My point here is simple. There’s a lot of forwards in the pipeline, and Babcock’s giving opportunity to a lot of players to test the NHL ice surface. There’s no need for an immediate impact player in any position, and therefore, there’s no need to rush Marner to the NHL. The time comes when it comes.

Marner is too young and small to play in the NHL. Let me explain first by looking at Leafs players who played in the NHL for the first time in the 2015-16 season, and compare them to ones who didn’t: 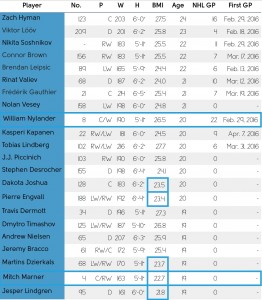 With the exception of Nolan Vesey, the youngest players selected in the 2014 and 2015 Drafts have not yet played in the NHL. Of the players who have played, none have a BMI lower than 24.0. Furthermore, in a recent interview Babcock gave to Maple Leaf Hot Stove, he said:

To say Mitch has got to put on a bunch of weight, to me, is ridiculous.

Yet the only difference between Marner this year, and William Nylander last year is 27 pounds.

There’s not really a roster spot readily available for Marner. Fifty-seven per cent (eight out of 14) of Toronto’s current forwards are first round Draft picks. In the 2015-16 season, 42 per cent (five out of 12) of their forwards had a PPG of +0.50. Nathan Horton hasn’t played in any NHL games since the 2013-14 season, and Auston Matthews hasn’t played in any NHL games, so they weren’t included in this calculation. 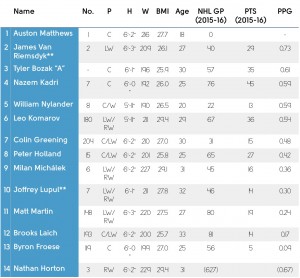 Let’s assume that Matthews will have a PPG of +0.50 this upcoming season and if Horton resumes his 0.67 PPG, and Marner manages to produce points at a rate of at least 0.50, he’d have a higher PPG than 53 per cent (eight out of 15) of Toronto’s forwards. This could land him a spot on the roster.

If Marner were to be one of the top 26 point producers in the Atlantic Division, he’d have to have a PPG of at least 0.62. The Leafs are tied for least amount of top point producing players in this division, but that isn’t necessarily a bad thing. It simply means they need to implement a strategy to get around it.

One of these strategies could be a puck-possession style of play, like the Los Angeles Kings. Another could be scoring on the power play, like the San Jose Sharks. If the Leafs utilize a strategy that doesn’t rely on point producers to rack up the points, then perhaps Marner’s biggest contributing factor will be how well he performs his role in this new strategy. Whatever the strategy is, Marner will have to prove himself a worthy candidate. The question is, will Babcock give Marner the opportunity to do so?