The use of analytics in the hockey world continues to grow by the day. While I can’t claim to be a statistician by any stretch of the imagination, I do use as much data as possible in my analysis to paint a larger picture of what’s happening in front of me.

Thankfully, for guys like me, there are much smarter individuals that create visualizations for these numbers. That’s where Micah McCurdy comes in.

Micah, who many will recognize from his work at the former mecca of hockey analytics, WarOnIce.Com, recently published on his current site, HockeyViz.com, a model that takes a stab at predicting the 2016-17 season. What’s involved in creating a predictive model like this? Below is the explanation from Micah’s article:

I simulated the 2016-2017 NHL seasons a million times to estimate what is likely to happen. I used a simulation harness linked to my predictive model for single games, Cordelia. Curious readers will find lots of detail in those links, but the short version is that I consider offence and defence, shooting and goaltending results, special teams, penalties drawn and taken, rest, and home ice advantage. Injuries, suspensions, and all off-season moves are included.

Ultimately, the final prediction that stems from his work will be music to the ears of Penguins fans and varies slightly from what most analysts have predicted on their own for the upcoming season. Similar to last season, the Washington Capitals tend to be the favorites to win the Eastern Conference. However, the numbers indicate that if the Penguins continue to perform as they did in the second half of 2015-16 under Mike Sullivan, they’ll be a tough team to keep up with.

Micah’s conclusion for the Eastern Conference – which, again, you can find at HockeyViz.Com – shakes out as follows. 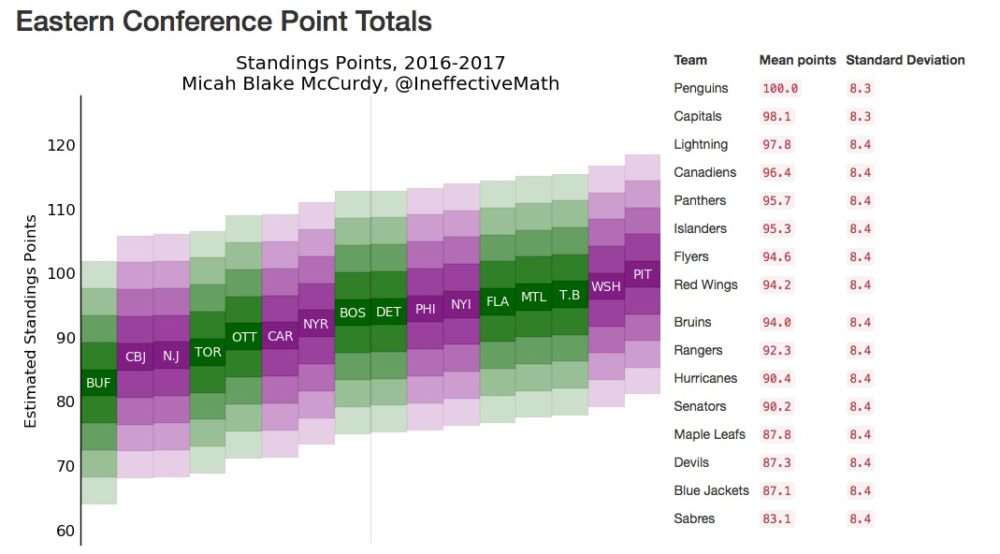 There are a few things that stand out. The Rangers falling in the bottom half of the conference will be a bit surprising for some, but their decline has been evident in recent seasons. The Capitals rank just behind Pittsburgh, which isn’t a surprise when you consider last year’s regular season, but don’t be surprised if Tampa Bay supplants them in that spot. The Nikita Kucherov saga has ended with a three-year extension and the Lightning are entering 2016-17 as dangerous as ever.

Also notable, the Penguins are picked to finish just behind the L.A. Kings in the race for the Presidents’ Trophy.

Predictions are obviously an inexact science but the results of this model will be interesting to revisit at season’s end. There are things that aren’t taken into account – as Micah notes at the bottom of his article – such as coaching changes that will impact how a team plays but this is the most educated ‘guess’ available right now.

I highly recommend reading the entire piece and all his other work at Hockey Viz, and we’ll see you back here in April to judge how close this is.

Pittsburgh’s Stanley Cup run has been labeled by many as getting hot at the right time, lucky, and even an anomaly. Ignored by anyone who falls into those camps is that the Penguins were simply a really, really good team. The numbers back up just how dominant they were.

Pittsburgh turned it on in a big way when the calendar turned to 2016. From January 1 through the end of the regular season, they ranked second in Corsi-for percentage, first in scoring chance percentage, first in shots-for per 60 minutes and first in goals-for per 60 minutes. Considering just how many offensive categories they owned, it’s really no surprise they were able to make a championship push.

Of course, offense wasn’t their only strength.

You could argue that Pittsburgh’s biggest strength under Sullivan has been their relentless forecheck. The system they employ sets up very similar to a trap, but then sends an immense amount of pressure toward the puck carrier. They create turnovers, use their speed to bury opponents in their own zone and each line possesses at least one finisher. But, their defensive game – mainly their ability to quickly transition up ice – can’t be overlooked.

At one point, prior to getting shipped out in exchange for Trevor Daley, former Penguins defenseman Rob Scuderi stressed how important it was for balance on the blueline. According to Scuderi, you can’t staff a defensive corps with all offensively minded defensemen and be successful. In a way, Pittsburgh proved him and many other traditionalists wrong last season. The Penguins do possess individuals who are tasked with playing a defensive style. Brian Dumoulin, Olli Maatta and Ben Lovejoy – who signed with the Devils in the offseason – were all playing alongside puck movers, which meant their role was to help cover for individuals like Kris Letang and Daley when they join the rush. However, those individuals also possess exemplary puck skills, a necessary attribute to play on this blueline.

The scary part of how well this team played down the stretch and through the postseason last year is that they’re all back. The lineup Pittsburgh deploys on opening night will almost mirror the group that lifted the Cup in June. As far as whether or not they can continue their dominant play: Why not? A lot of their success will weigh heavily on how much of an impact Sidney Crosby’s recent concussion diagnosis has on his playing time but that’s an entire conversation in itself. For now, I’ll trust in Micah’s output and you should too. If any team in recent history has had a chance to repeat as Cup Champs, it’s these Pittsburgh Penguins.