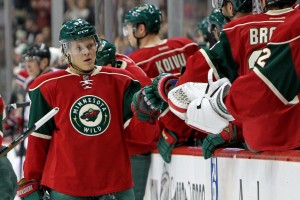 Led by Mikael Granlund, the Minnesota Wild came out flying tonight and unlike the previous two games, they didn’t take their skates off the pedal on Monday night in St. Paul. I’ve witnessed very few games that were this one sided. The Wild were in control from the opening whistle to the final seconds of the game.

While the Minnesota Wild dominated every aspect of the game, their inability to score during regulation could have cost them a critical game three victory. Lose this game and the Wild would have had to become the fourth team in NHL playoff history to come from three games to none down to win a playoff series.

This game needed an extra frame to be decided and it was one of the team’s favorite sons who was the hero.

As has been the case all season long, the Wild made another goalie look like a future Hall of Fame inductee. Don’t get me wrong, Semyon Varlamov is a great goalie and he made some great saves tonight but the Wild have had trouble netting goals all season. They were ranked seventh in scoring.

Despite not being able to score goals in regulation, the fact that the Wild dominated the play and spent most of the night in Colorado’s end of the ice allowed them to limit the Colorado attack which had been potent throughout the first two games.

Back on Track on Defense

Minnesota had been criticized for their poor defense in the first two games. Minnesota uncharacteristically turned over the puck, was easily beaten by Colorado’s speed and didn’t force the play on defense.

Tonight Minnesota dominated the game on both the offensive and defensive ends of the ice. The team’s forwards did their job taking neutral zone ice and space away from the Avalanche. There wasn’t much space for Colorado’s top line to move an prance around.

I think the real strength for the Wild was their transition game. In the defensive zone, Minnesota players moved the puck out of their zone with authority and with a purpose. They were able to work the puck up ice into the offensive zone. It was a thing of beauty.

The team’s offensive players were able to transition into a defensive mind set when Colorado got the puck and were able to move it down ice. That didn’t happen too much in this game. No offense to Colorado but Minnesota showed their fans how ineffective the Avalanche’s big guns can be when a good defense and good goaltending shuts the door on them.

Despite the team’s inability to score, the fact that tMinnesota continued to pressure Colorado gave this team from the State of Hockey a chance to win the game in overtime.

Granlund Was the OT Hero

With a little under five minutes to play in overtime, the Minnesota Wild continued where they left off through the first three periods. While pressuring the Avalanche in the offensive zone, Mikael Granlund took the puck from behind the Avs net, he beat a check, circled around the net and then while diving scored the game winner.

Granlund was arguably the best player on the ice tonight. He showed why he was so valuable in the regular season and why the Wild were eager to have him back in the lineup after suffering an upper body injury late in the season.

Some Minnesota Sports media personalities believed that the Minnesota Wild’s chances in this series would come down to Granlund  being able return the lineup. He was able to return to the lineup and tonight he showed his team why he’s so valuable. The guy has grit and determination.

The Wild will have to play like this for the rest of the series. If they can sustain this level of play they will have a chance at breaking the backs and will of the Colorado Avalanche.

There will be no sweep in this series and Colorado will have to work hard as heck in remaining games of this series. This will not be an easy task for them.

At least for one night this Minnesota Wild fan can go to bed in a good mood and will be able to rest a little easier tonight.