This season, their first as an NWHL team, the Minnesota Whitecaps won five straight games to start the season and five straight games to end the season. That was good enough to finish first in the league (12-4-0) and capture home-ice advantage on the final day of the season. In their first playoff game as a pro team, they knocked off the defending champion Metropolitan Riveters (5-1) and will now host the Isobel Cup Final on Sunday afternoon (1 pm CT/2pm ET) against the Buffalo Beauts.

Buffalo will be making their fourth consecutive appearance in the Cup Final, but it was Minnesota who came out on top in three of the four matchups during their regular season series. The Beauts’ lone victory came in their final matchup, a 4-0 whitewashing on Dec. 30 in Buffalo. Both teams have multiple players in the running for major awards, so it’s safe to say this matchup truly is the two best teams from the NWHL’s fourth season. 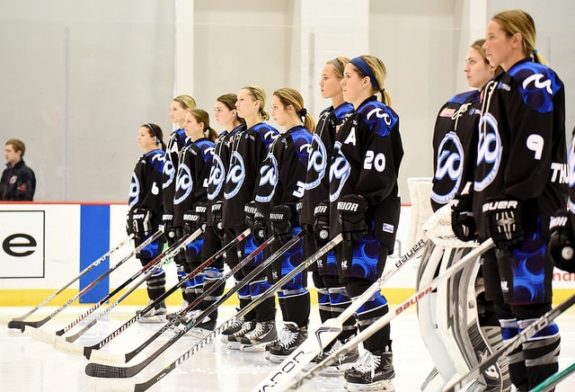 Some notables during their season series: Maddie Elia led the Beauts with five points (3g-2a) and Kendall Coyne Schofield led the Whitecaps with five (1g-4a). On special teams, it was the penalty killers who were dictating play throughout the majority of the matchups with Minnesota’s power play going 1-for-18 and Buffalo’s was 2-for-13. The Beauts also got a penalty shot goal from Dani Cameranesi in their second matchup at TRIA Rink in Minnesota.

There was a lot of buzz this season about Buffalo’s goaltending duo of Shannon Szabados and Nicole Hensley, and rightfully so, but it was the former Beauts goalie Mandy Leveille that probably had the best season of any netminder in the NWHL. “We’re so, so, so excited to play for a championship,” the puck stopper told NWHL.zone following the semifinal win on Friday night. 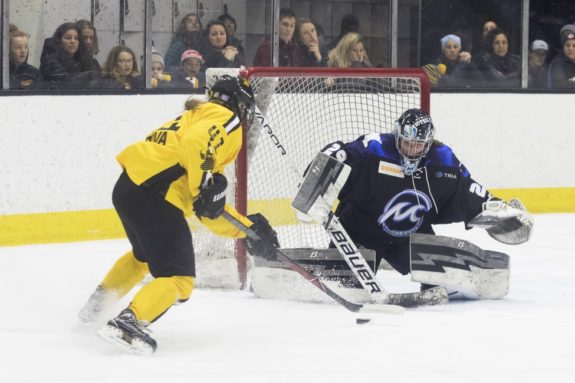 “We can’t wait. But we know it’s going to be tough. We’re happy with how we played tonight but we know that doesn’t mean anything going into Sunday. We just have to get after it Sunday.” She tied for the league lead in wins (11) and shutouts (2) while finishing second in shots faced. Leveille was the hard-luck loser in last year’s Isobel Cup Final, dropping a 1-0 decision to the Riveters and you can bet that she will be ready to capture her second championship in three seasons as a pro.

Time and time again throughout the season the Whitecaps controlled the pace of games with their speed. Whether it was Coyne Schofield, Allie Thunstrom, or Jonna Curtis NWHL defenders were given fits trying to contain the speedy wingers. A key matchup to watch in this game will be how often the third pairing on the Beauts blueline is used. Jacquie Greco and Jordyn Burns have been used sparingly this season by Buffalo and in a game where Minnesota will have the last change, it will be interesting to see how many (or few) minutes the coaching staff uses the duo.

Thunstrom could’ve potted at least four goals in the Whitecaps semifinal win, so it won’t be a shock if she nets one with everything on the line on Sunday. Expect the other four defenders (Lisa Chesson, Savannah Harmon, Blake Bolden, Emily Pfalzer) to get worn down trying to contain the lightning bolts streaking down the wing.

From the moment Katie McGovern scored the franchise’s first NWHL goal 13:29 into their first game until when the final buzzer sounded completing the elimination of last season’s champions, the Whitecaps have seemingly been on a mission. Like Buffalo, they have a plethora of weapons to employ on any given shift and additionally they have the hottest goalie in the league. Over her last five games, Leveille has given up more than one goal a grand total of zero times. Expect a close game, 3-1 (with an empty netter) and at the end of it, Minnesota will become the fourth different team in four seasons to hoist the Isobel Cup as NWHL champions.