As the Earth completes it’s journey around the Sun and gets ready to embrace the northern hemisphere once again, NHL fans completed their journey through the 82 games this year had to offer. The Montreal Canadiens’ 2014-15 season, set in a grueling Canadian winter has come to an end. Canadians are ready, and eager, for spring. Hockey fans, the most argumentative of all Canadians, are ready for the challenges of Spring Hockey.

Resuscitation Of The Year

The snow is melting away from the Montreal streets to uncover minefields of dog shit and a few months worth of litter. Yet, Montrealers happily abandon their shut-in lifestyle to go expand their lungs outside. The population is anxious to see that the only ice around will be at the Bell Centre.

You see, playoff hockey has a meaning in Montreal it doesn’t have anywhere else. In a city of self-centered assholes filled with language, political, and racial tensions, the playoffs has a unique way of bringing everyone together.

From the most astute hockey observer to the person who’s only heard of hockey. In the playoffs, someone whose Canadian ancestry go back to the colonies will cheer just as loud as a Syrian refugee fresh off the plane. A Beemer driving businessman might watch the game at a bar, sitting next to a frugal leftist. If you’re sporting the Bleu-Blanc-Rouge, you’re in. The Montreal Canadiens brings this city together like nothing else can.

Just like in 2013, the Montreal Canadiens, first in their division, will face the fourth placed Ottawa Senators in the first round of the Spring Classic. However the Habs expect the outcome to be vastly different.

After newly minted team president Geoff Molson oversaw a complete overhaul of the franchise, 2013 was the first playoff outing of the ”new” Habs. The recipe of success was still missing some ingredients. A mixture of inexperienced players and a discombobulated defense, cost the Montreal Canadiens an early five-game exit.

Although there are similarities in the premise. This particular match-up is much different from 2013. At least statistically. 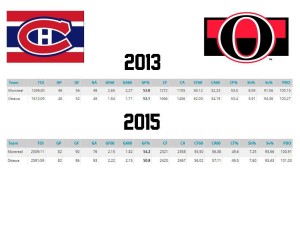 Based on regular season statistics at 5v5 Close, Ottawa may run into a brick wall in the Montreal Canadiens. The Sens’ attempt 56.02 shots against their opposition per 60 minutes. The Habs received, on average, 56.38 shot attempts per 60, allowing only 76 goals.  There is a differential in GF% of 3.4% favoring the Montreal Canadiens, that could prove to be the difference between the two teams starting hot goalies.

The Stanley Cup playoffs is when P.K. Subban is at his best. After playing only two regular season games in 2009-10, Subban cracked the Habs’ line-up and became a top four defenseman, playing 22 minutes a game on average on his way to his first conference finals, earning eight points in 13 games.

In last year’s playoff, he was the ignition to a team that steamrolled the then mighty Boston Bruins.

But this time around it won’t be all about P.K. Subban.

Two very important cogs in their respective machines, P.K. Subban and Erik Karlsson will face each other once again. Two perennial Norris Trophy candidates, they both will be relied on heavily to carry their team’s offense while keeping the damage on their end to a minimum. With their respective partners, Andrei Markov and Marc Methot, they form two of the best first defense pairings in the league. 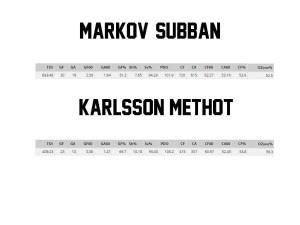 This will be a real heavyweight bout. Experience however, is on the Habs’ side. Subban has 30 points in 43 playoffs games, his partner Markov, 29 points in 71 games. Both have two Eastern Conference Finals under their belts. On Ottawa’s end, Karlsson has 15 points in 23 playoff games while his partner Methot has five points in 15 games. Both have not gone any further than the second round.

Therrien says he’ll be surprised if Pacioretty plays in Game 1. But will see Wednesday how he feels.

The Montreal Canadiens decided to resort to old school tactics by keeping everyone in the dark when it comes to their ace sniper Max Pacioretty.  The Habs’ best forward, Pacioretty played the best hockey of his career this season. Finishing fifth in the league in goals (37) and sixth in even strength goals (27) all the while transforming into one of the best two-way players in the game. In fact, his league-leading +/- differential of 38 put him in most Selke Trophy discussions.

The most highly praised player this season after Carey Price, Pacioretty will need a strong performance sustained over a few rounds to cement his place as the Montreal Canadiens’ leader. The smart money is on Max Pacioretty standing on the blue line when Ginette Reno belts out the National Anthem.

The Ottawa Senators’ youth movement brought them great success this year. Success they hope to carry into the playoffs. The Montreal Canadiens will count on their young players to contribute offensively. If the Habs expect to go all the way down the road to Lord Stanley’s silverware, they will need a few goals from Brendan Gallagher and Alex Galchenyuk.

Both set to become RFA this off-season, Brendan Gallagher signed a six-year deal back on November 29th. Alex Galchenyuk is still unsigned. Like his teammate P.K. Subban did last year, Galchenyuk might want to shine bright in the playoff spotlight and force Habs’ management to loosen their purse strings.

The two finished the season on a line centred by veteran Tomas Plekanec. Together, they are three of the top four goal scorers for the Montreal Canadiens. If Max Pacioretty really is sidelined to start the series, it will then fall on them to put some numbers on the board. 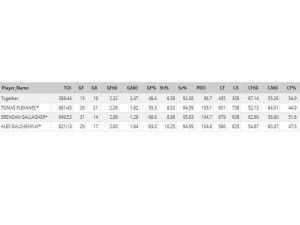 Having played less than 400 minutes together this season, they haven’t played as well together as they have apart. Their GF% falls dramatically to 48.4%.

The Montreal Canadiens will hope for a power play revival in the playoffs. It has to start with this line.

At the Trade Deadline, the Habs’ management reached for sandpaper and not silk. They grabbed Devante Smith-Pelly, Torrey Mitchell, Brian Flynn, and Jeff Petry.

The Ottawa Senators’ Kyle Turris and Bobby Ryan have been criticized in the past for folding when things get tough. Torrey Mitchell, Devante Smith-Pelly, and Brian Flynn will join their efforts to the Brandon Prust and Dale Weise to grind them out and try to get Ottawa’s top offensive players off their game.

Every season, there is a bottom-six guy that becomes a superhero in the playoffs, from Fernando Pisani to Max Talbot to Carl Hagelin. They’ve scored important goals for their teams. With Dale Weise and Lars Eller scoring big goals for the Habs last year, it may be up to one of the new guys to surprise their club.

Hail to the King, baby.

I wish I was clever enough to come up with something that hasn’t already been said about the Montreal Canadiens’ net minder. With a .933 Sv% and an incredible 1.96 GAA in 66 games played, he is not only the best goaltender in the league, he is the best player of the National Hockey League. As if that wasn’t enough, he beat a record of a century old club that iced some of the very best goaltenders in the history of the game.

There is an old saying that goes as such: ”Defense wins championships”. To find a better last line of defense than Carey Price, you will need special clearance from the Pentagon. The Montreal Canadiens finished first in the league in goals against with 184. One less than the Chicago Blackhawks… Maybe… Nahhhhh, nevermind.

Howie Morenz abruptly died from a blood clot after suffering a broken leg at only 34 years old. On March 11th, 1937, his funeral was held at the Montreal Forum. Legend is; his spirit woke up, thinking he was late for a game, got dressed, and as he was about to it the ice, he saw himself laying in his casket, surrounding by thousand of fans. Morenz decided to stick around the Forum to help his beloved Canadiens.

The legend grew and so did the number of ghosts. Many used them as excuses that justified lucky bounces and breaks the Canadiens got over the years. Making it so hard for the opposition to win at the Forum.

This year, the Canadiens’ alumni lost some of its most prominent members. Claude Ruel, Elmer Lach, Dollard St-Laurent, and Jean Beliveau.

Some like to joke that the reason the Montreal Canadiens never won a cup outside of the Forum is that the Ghosts aren’t there to help out anymore. This year provided a solid helping of them. Not too shabby ones at that.

While for some the defeat of 2013 is still too recent, triggering some kind of couch coach PTSD.  Facing the Senators may prove to be beneficial for the Montreal Canadiens. Facing a young, skilled team who doesn’t play too much on the bruising side of things. A team that plays a fast, north-south game. It’s good conditioning for the Habs, as the consensus is that the most likely second round opponent would be the Tampa Bay Lightning.

Numbers according to puckalytics.com and NHL.com