The Nashville Predators, unquestionably, field the most talented collection of defensemen in today’s NHL. Other teams may boast a bigger star or one electric pairing but no one offers the depth of that in Music City. More than any of its forward lines, Nashville’s defense demonstrates the impressive abilities of general manager David Poile.

Even more mind-boggling than the defensive roster? How it looks on the salary sheet. Nashville’s eight defensemen, including P.K. Subban and Roman Josi, combine for just one-third of the team’s total cap hit. This grand theft has left plenty of room for offensive firepower as well as an expensive franchise goaltender.

P.K. Subban, of course, brings near-global attention to one of the most non-traditional NHL markets. His on-ice capabilities are as endless as his capacity for a quick joke or flash of a smile to the camera. Night after night, the 28-year-old All-Star neutralizes the best forwards opponents have to offer.

At the same time, Subban leads the team in points and the league in goals by a defenseman. He has inarguably earned a spot in the Norris Trophy conversation while helping maintain the Predators’ spot as a Cup contender.

Subban is, of course, not doing it alone. After missing the first several months of the season to recover from surgery, Ryan Ellis is making up for lost time. Defensively, Ellis’s intelligence and foresight make him a formidable obstacle for streaking forwards. Characteristic of his team, his offensive contributions are also substantial. His deadly slapshot provides a balm for many Predators fans who still miss Shea Weber dearly.

Breaking down Nashville’s defense in terms of shot attempts yields predictable results. The top four defensemen provide a positive value in this category; the Predators produce more unblocked shot attempts than they allow thanks to these d-men while the bottom half of the roster provides neutral or negative rates in this category.

When it comes down to it, a defenseman’s responsibility is to defend. Yes, much of the Predators’ identity is based on its regular five-headed attacking force. That said, at the back end, the team is surprisingly like thinly sliced Swiss cheese: full of holes and, when exposed, it seriously stinks.

It’s always fun to have this conversation with fans of other NHL teams, especially those in the Eastern Conference. When you don’t watch the Predators play often, it’s easy to regard the team as a defensive powerhouse. With the names featured on their blue line, it’s understandable. The really enjoyable part of the discussion is provided by a single image, which is generated (and updated regularly) by Micah Blake McCurdy of HockeyViz: 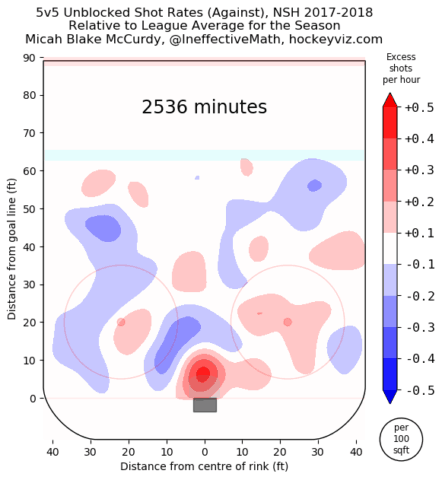 The response to this image, typically, is shock. If the subpar zones were a little less dramatic or spread slightly out from the low slot, this would be acceptable. Unfortunately, their defensive weaknesses are illustrated here in brutal clarity. The deep shade of red right in front of net tells its own tale of how hard Nashville’s goaltenders work to keep the team alive.

In fact, Pekka Rinne and Juuse Saros have been elite all season. Compared to a league-average, high-danger save percentage of 87.5% at five-on-five, Nashville goaltenders are producing a 90.2% (via Natural Stat Trick). Anything less than tops in this category and the Preds would be several rungs down in the standings.

It’s possible you’ll find a few dissenters who disagree that the Predators have the single-best defensive personnel in the NHL. However, I challenge you to find anyone who can produce a convincing argument that puts them out of the top three. There seem to be very few, if any, holes in this group of players, at least where the top four are concerned.

You may be tempted to blame the weaker third pairing, which often includes Yannick Weber, Matt Irwin, Anthony Bitetto, or Alexei Emelin. It’s true that these players tend to allow high-danger chances most often. Somewhat counterintuitively, however, it’s the top four who allow goals more frequently. With a group of players so talented and so coveted by essentially every other NHL franchise, these trends seem paradoxical.

One might expect (hope, even) Peter Laviolette to apply his nearly thirty years of NHL experience to this issue. Surely, an intelligent, experienced head coach should be able to analyze the team’s situation. The walls may not be cracking yet but the foundation is made of melting ice. Come the warmer playoff months, the whole operation is at risk of becoming rubble.

Very rarely has the team played up to their world-beating caliber this season. (Un)fortunately, the results have been good, in spite of their frequent sluggishness. The coaching staff has made its approach clear, whether they intended to or not, that these problems will not be addressed proactively. The team is hanging on by a thread composed of Finnish goaltenders.

The deepest concern, for a team with the strongest roster in franchise history, is of wasted potential. Those cheap defensive contracts will be up soon and players will want to get paid. In a few years’ time, there may not be room for the speedy group of young forwards. The Predators should be all in for the Cup now since it will likely be a long time before they are able to combine such a lethal collection of players again.

For now, the main focus should be on tightening up the high-danger area defensively. Sacrifices to the offensive preferences of Subban and Josi, for example, might be required. It’s much better to go through those growing pains now than in April when Rinne shouldn’t have to do it all himself. They have the firepower to capture their first Stanley Cup. They’ll need to inject some more brain power, however, to make it a reality.