Yes, the title is a little bit snarky but it’s true. The Columbus Blue Jackets were sitting Cam Atkinson, Norris Candidate Seth Jones, Zach Werenski, Ryan Murray, Nick Foligno, Alexander Wennberg and Artemi Panarin. That’s basically their full top line, and this game went accordingly. The Nashville Predators, in turn, sat Viktor Arvidsson and Eeli Tolvanen. Which, while both are good players, have nowhere near the same impact as the Blue Jackets’ players.

Sergei Bobrovsky received the night off, so Joonas Korpisalo took the ice for the last time this season. He then put up a .955 save percentage at five on five, but things got worse when looking at all situations. The fact is that the Predators made life very difficult for poor Korpisalo. Let’s look at the stats. For reference, we’re using shots, scoring chances (SC), and high danger chances (HDC). All stats are at five on five. 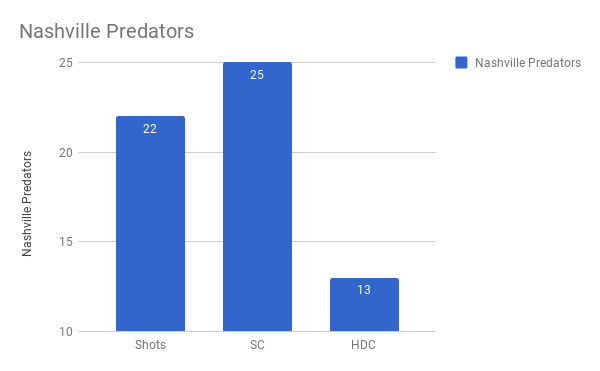 The Predators were flexing their offensive muscles against a much weaker opponent, and it showed. The slot was open and exploited often, much to the chagrin of Korpisalo. Who, despite a poor defensive showing from his team, only allowed one goal at five on five. Quite frankly, things could’ve been way worse, and the Blue Jackets owe it to him that the game was so close.

Scoring chances were flying around like hot cakes, with Kevin Fiala leading the charge with five scoring chances created, with three more in high danger areas. If the Predators can continue to produce at this level, the rest of the league better watch out.

The Nashville Predators were the only team without a hat trick during the 2017-18 season… until game 82! Filip Forsberg scored two power play goals and then added an empty-netter. The Swedish prince has been silently good all season, and it’s fitting that he’s making some more noise as the playoffs roll around. Granted, Forsberg beat up on much lesser talent, but he made the Jackets pay. Let’s go in depth. For reference, we’re using unblocked shot attempts (Fenwick), scoring chances (SC), high danger chances (HDC), and zone starts for (offensive) and against (defensive). Once again, all stats are at five on five. 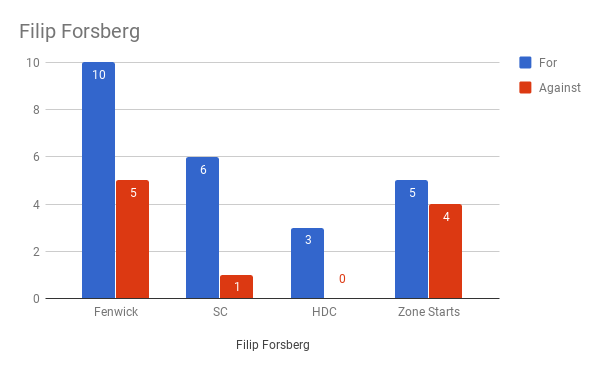 Teams need their best players to step up, and that’s exactly what happened. Forsberg and Ryan Johansen were everywhere on the ice, and made a real positive impact. Just judging from Forsberg’s numbers alone, the Predators couldn’t wait to put him back out on the ice at the end of each shift.

The high danger chances alone are worth it, but otherwise, Forsberg was incredible. He got to the dirty areas of the ice and fought like a monster in the corners. A depleted Blue Jackets had no answer for the scoring winger.  He looks to be in playoff form after a long and grueling season.

There is no better time of the year than the first round of the playoffs. Hockey is constantly every night, and every team is rested and raring to go. The Predators will take on the Colorado Avalanche, in what could be called the “Sam Girard Bowl”, as he was traded mid-season. Colorado is clearly outmatched, but anything can happen during the first round.