After a disappointing week, the Nashville Predators needed to make a statement. Pekka Rinne and the top line certainly did, but everyone else looked so-so. The worries about the power play are very real, even though they did score two goals. The zone entry system looks broken and the rest of it seems to revolve around getting shots from defensemen like P.K. Subban and Ryan Ellis. Speaking of defense, there was none for the Predators. We’ll get into that, and more in this fun analytical recap. So let’s get started with the story of the game.

Pekka Rinne Has Another Vezina Performance

As I’ve previously mentioned, Rinne has done so much with so little help. This game was no different. The Nashville Predators were beaten in just about every category and did little to stop the onslaught. Despite little help, Rinne stood tall — let’s take a look at the heatmap to see where the Senators were mainly shooting from.

Oh boy, it’s not a good look, eh? The Senators got a few good shots off from the left point but were excellent at getting to the net-front. The fact that only one goal came from that area is incredible, especially considering that that goal was on the power play. The other goal was a beautiful shot and a terrible defensive play from Ryan Ellis where he surrendered the slot to McCormick.

The Senators were buzzing around the net the entire game and could’ve easily had two or three goals. If it had been a more potent offense like Tampa or Winnipeg, we’re looking at a totally different final score.

The top forward line of Ryan Johansen, Filip Forsberg and Viktor Arvidsson was incredible on Monday. The first period especially was a dominant performance in both ends of the ice. For reference, we’re using unblocked shot attempts (Fenwick), high danger chances (HDC), goals and zone starts for (offensive) and against (defensive) at five on five. 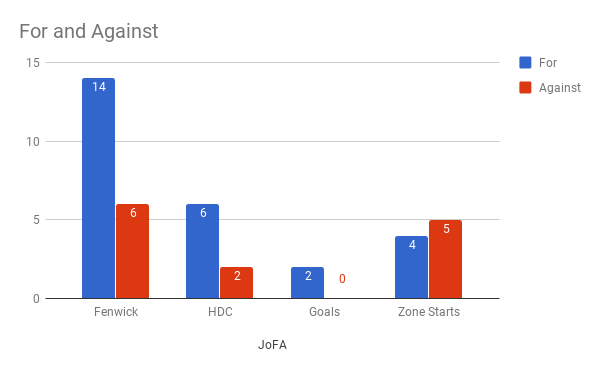 This is how the stats should look for the top line each and every night. Obviously, the goals won’t always be there, but JoFA should dominate high danger chances and unblocked attempts. The best part of all of this is that Peter Laviolette used them in a two-way role, as JoFA received absolutely no zone sheltering. On top of these zone starts, JoFA played over 10 minutes of five on five against the Senators top line of Marian Gaborik, Matt Duchene and Mike Hoffman.

I’ve always argued that Arvidsson is a product of both Johansen and Forsberg, and it was evident tonight. He scored a good goal on an easy tap-in from two beautiful backhand passes from his linemates. The second goal was pretty from Arviddson, but it was mostly because of Forsberg’s excellent forecheck on Erik Karlsson. Nevertheless, all three deserve equal parts of the praise. Hopefully, for the Predators, they can keep it rolling.

After a point-per-game pace for his first 17 games as a Predator, Kyle Turris has gone stone cold. His dependence on Craig Smith and Kevin Fiala is becoming a bad addiction, and he can’t seem to turn it around. Monday was no different, as Turris struggled with some severe sheltering against middle six competition. We’re using the same stats as the JoFA chart. 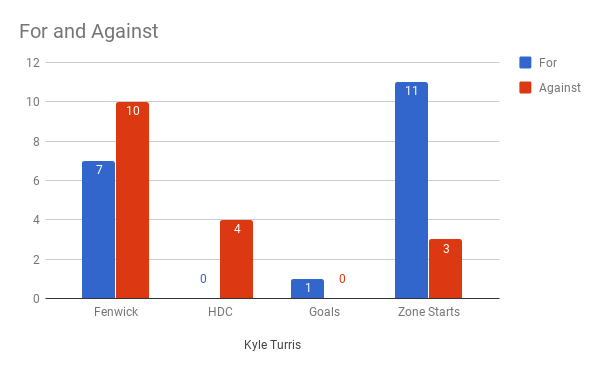 No second line center in the NHL should be putting up these numbers with this amount of zone and opposition sheltering. It’s a bit nuts, to be frank. The unblocked attempts is one thing, but the high danger chances reads like an S.O.S. from the Titanic. It’s terrible, especially considering that Turris played most of the night with P.K. Subban and Mattias Ekholm, who both broke even in terms of advanced stats. This is becoming normal for Kyle Turris, which is extremely worrying.

Oh, before we move on, I should mention the goal that Turris was on the ice for. He was a complete non-factor as Kevin Fiala created a turnover and then made a beautiful pass to Craig Smith who wired one past Craig Anderson.

The Predators have the most talented defense in the NHL — notice I didn’t say best. It’s because the defense is downright terrible in their own zone, and it shows. Don’t believe me? Go look at the heatmap above! Let’s dig into it more though, and take a look at the numbers. 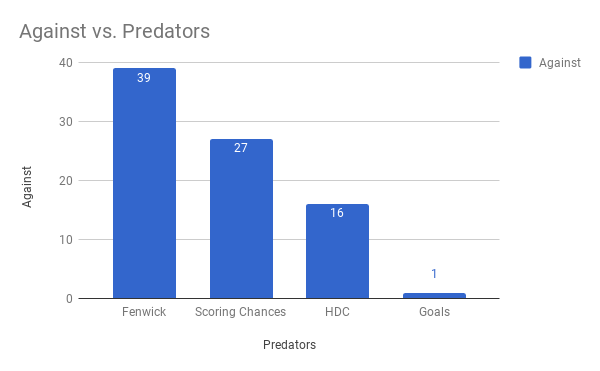 No, what you’re seeing above isn’t a joke. These are the numbers that the Predators gave up at five on five. Thirty-nine unblocked shot attempts against isn’t terrible, especially as it ended in 33 shots on net. That quantity isn’t a huge deal, but it’s more of the quality.

The Senators had 27 scoring chances and 16 from a high danger area. That’s basically putting all your money on one turn of roulette, and lettin’ it ride — except that roulette is your goaltender and lettin’ it ride means that you’re sitting back in a lawn chair while your goalie works his tail off. Essentially, Rinne only allowed two goals despite his defense’s best efforts to give up a few more.

The Predators take on the Detroit Red Wings for the second time in seven days. Petr Mrazek frustrated the Predators last week, but is now a member of the Philadelphia Flyers, so he’ll be a non-factor. The Wings might be entering a rebuild, but they can still sneak out a win.