Place of birth:  Halifax, NS, CAN

In trying to recapitulate what MacKinnon brings to a NHL franchise, I ended up with an acronym – DEADLY (in reference to the offensive weapon that is Nathan MacKinnon):

Mooseheads forward Martin Frk on teammates Nathan MacKinnon & Jonathan Drouin: "That's how they were born. God made them to play hockey."

The Similar Paths of Sid and Nate Will Diverge

By now, most hockey fans know the story of Nathan (Nate) MacKinnon and the uncannily similar path shared with Sidney Crosby. The two sub-6’0” (although MacKinnon recently listed at 6’0”), ultra-talented, exceptionally explosive, game-breaking centremen both grew up in Cole Harbour, Nova Scotia.

They both played at the hockey factory that is Shattuck-St. Mary’s prep school. They were both drafted 1stoverall in the QMJHL.

There’s more. They both have athletic parents. Crosby: father drafted by Montreal; MacKinnon: father a marathon runner; mother was youngest swimmer in the Canada games.

Pat Brisson is the agent for both. Both Crosby and MacKinnon went into their draft eligible seasons as the favoured number one overall selection, although the latter has faced heavy competition this draft year as Seth Jones and Jonathan Drouin have presented a colossal challenge. MacKinnon came this close to also being part of a post-lockout draft.

They both have a similar physical build – robust, stocky with remarkable lower body power resulting in supreme acceleration and aggressive edges. Both MacKinnon and Crosby have a natural born ability to perform in clutch situations. They have a superior will to strive to be the best and will to win.

As our Eastern Canada bird dog, Eldon MacDonald summed it up earlier in the year, MacKinnon is still his own player when he hits the ice:

“You would think with all the similarities MacKinnon is very similar to Crosby on the ice. Well, such is not the case.

Crosby is a puck carrier with outstanding vision who thinks pass first but still has an elite shot.

MacKinnon is more a shooter of the Steven Stamkos variety and has excellent, but not elite vision.

Assuming MacKinnon continues to progress, his upside is that of a perennial candidate for the Rocket Richard Trophy (most goals in the season). He probably will never win the Art Ross Trophy (most points in a season). Maurice “The Rocket” Richard never won the scoring title either, but that does not diminish his legendary status.

Thus, MacKinnon’s game projects to the NHL as an elite goal scorer, but he will do it as Nathan MacKinnon and not in the mold of Sidney Crosby.”

One of the youngest players eligible for this draft, it’s almost hard to fathom that if he was born just a shade over two weeks later, he’d be draft eligible for the first time in 2014.

While he was ranked 2nd overall in The Next Ones Midterm Top 100 Rankings (January, 2013; final rankings due to be released early June), he landed in Colorado to the Avalanche with the 1st overall slot in The Next Ones Memorial Cup Edition Mock Draft. He’s a surefire 1st or 2nd overall pick.

Post-Memorial Cup, one scout who had Jones No. 1 switched to MacKinnon and two others wanted to "think about it" some more.

With Patrick Roy installed as coach and uber-hockey-decision guy (but not GM) of Avs, hearing it's more likely COL goes for Nate MacKinnon

Some scouts have Drouin ahead of MacKinnon, and vice vera obviously, and I know at least one who has Aleksander Barkov ahead of both of them

“MacKinnon is an extremely explosive and powerful forward that can shred defenses in almost any way imaginable. His skating is probably his best attribute as he has probably one of the best first two strides I have ever seen. When he gets to top speed he likes to use power moves to drive the net, but also uses his vision and shot to bring a different looks to the table every shift. He is unpredictable and unstoppable when he is at his best. MacKinnon is exceptionally strong for his size and his strength allows him to fend off bigger forwards and play the cycle game. His on-ice intensity is world class and I have zero doubt that he will become an allstar for many years in the NHL.”

“His skill level with the quickness with which he can execute, read and react — there aren’t many players who can do that,”

“Mr. MacMoney – Generational talent; clutch scorer; able to elevate his game at key times; and an intensity like “The Rocket”, Maurice Richard.”

“He’s pretty mature about that (media exposure). It started last year. He’s used to it. We know it’s important for our team, it’s important for Nathan. We want to give everyone a fair chance but at the same time we try to manage it so he can be concentrating on what he needs to do. He has improved a lot on the little things with and without the puck. He’s maturing a lot with his game and the way he reacts to the play.”

“Nate has a burning desire to make a difference in the game and more times than not, he’s successful. His skating is excellent with first step quickness that is exceptional which allows him to beat defenders and create opportunities in a flash. He has great hands and is able to maneuver the puck in the tight areas. His shot is quick and accurate and he doesn’t allow goalies to get a read on it. He is forceful and at times may be inclined to shoot first but his playmaking is very good. He is single-minded player in his approach and his determination along with his skill allows him to impact the game. A clear cut number one center.”

“Off the rush he is dangerous, with fantastic cuts, and the type of lateral agility that is very rare in a player and gives defenders nightmares. He can make that first step in either direction and be gone before the defender knows it. MacKinnon is a pure goal scorer, he knows how to finish plays in-tight, and has an excellent wrist shot and release from further away. With excellent hockey sense he is always in the right position, and his good vision and playmaking skills make him a threat to set up plays as well. This is one player who has the complete package. MacKinnon is an outstanding skater. His top-end speed is very good, and his acceleration and change of pace ability, one of the best in the draft.”

Not only is MacKinnon so incredibly talented, but he works so hard. He has the naturally given talent, but works relentlessly.

From October 2011, scout’s opinions on the phenom hockey prospect: 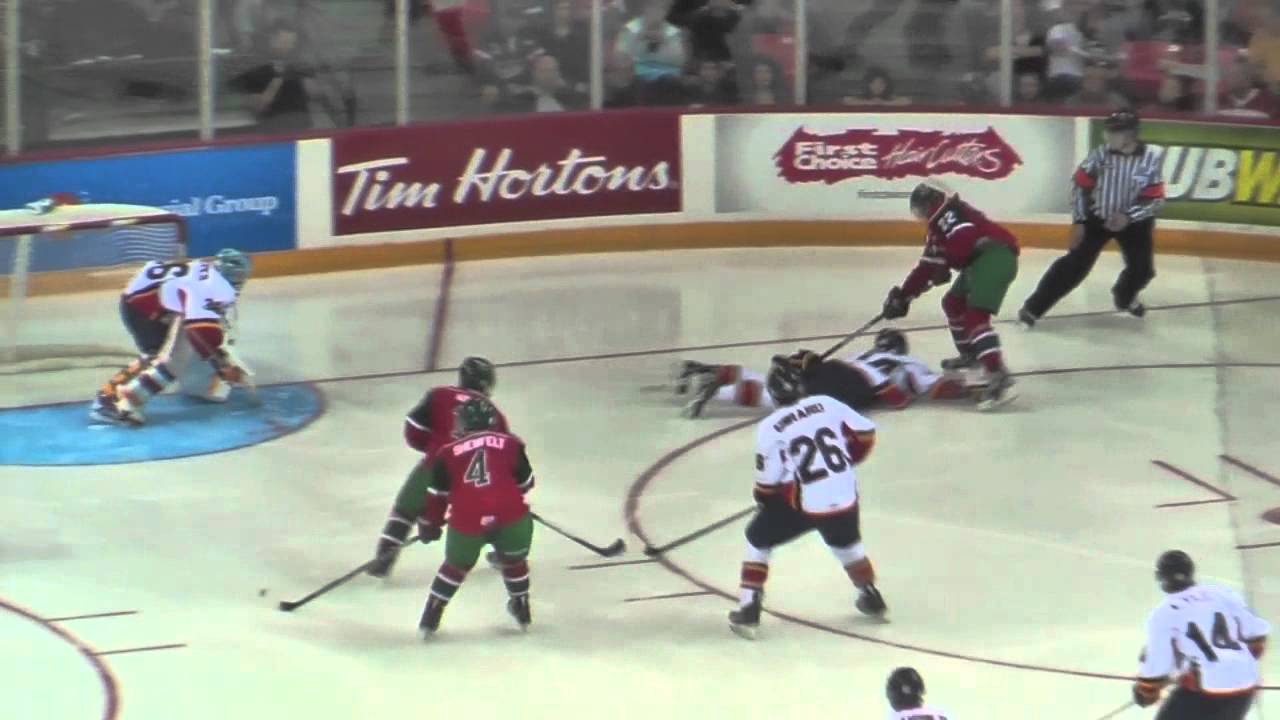 On December 13, 2012, MacKinnon was named a member of team Canada for the 2013 World Junior Ice Hockey Championships along with Mooseheads teammate Jonathan Drouin.”(Wikipedia)

If anyone worried about Nathan MacKinnon's WJC numbers, I just talked to a scout who notes that Mac is "built for North American pro game."

– A hybrid of Steven Stamkos, John Tavares and Sidney Crosby – if you can envision that.

– Cross-sport comparison: Minnesota Vikings running back Adrian Peterson; “All Day” is a ferocious and explosive competitor in the same vein as Nate and both are dangerous offensive weapons. Although not so severe as Peterson’s, MacKinnon also had to come back from a knee injury. One also has to throw in Kobe Bryant as Nate admires him as an athlete.

QMJHL news: Nathan MacKinnon traded from Baie-Comeau to Halifax for 2 players and 3 first round picks. Expect to hear the name MacKinnon a..

Working on a Nathan MacKinnon nickname. Thinking about 'Riptide.' He pulls in defenders before overwhelming them, plus it's Maritimey.