As the NHL creeps closer to the Stanley Cup Finals fans in every city but two are already thinking about next season. They are counting down the days until October, perhaps putting down deposits on season tickets or at least planning out how many games they want to go to. Hockey is one of the best sports to see at the rink and we love going to games. But there are people there that drive you crazy.

They are at every arena supporting every team. They are annoying and you have to put up with them to watch the game you love in person. Even watching from home, on TV, you are subjected to some of them.

We present the ten most annoying hockey fans. If you recognize yourself as one of these then perhaps this may serve as a public service article. An intervention can be organized, for the right price of course, to help cure you of annoying fandom. Hockey is a big tent and all are welcome, just do your best to not ruin the experience for the people sitting around you. Is that asking for too much?

People Banging on the Glass

This is a fan who annoys both the in person crowd and those watching at home on TV. This is a fan that has scored some great tickets to sit right up against the glass. Instead of marveling at how big, fast and skilled the players are he/she decides to repeatedly bang the glass whenever the play is near them. Why? What are you hoping to accomplish here? Do you really think Nick Lidstrom is going to be taken off his game because you are slapping the glass right behind him? We’ve checked with the NHL official statisticians (not really) and they have told us that there have been zero turn overs caused by banging on the glass. We get that making loud noises can be fun but all you are accomplishing is annoying the rest of us, it’s distracting, knock it off.

The Guy Trying to Get on TV

A distant cousin to the glass banger is the guy who has seats in the corner. He’s watched enough hockey on television to know that the camera will capture part of the crowd while the play is in his corner. So instead of watching guys battle for a loose puck he chooses to stand up, turn around and wave. Often you can see this guy with a cell phone to his ear. You can only imagine the conversation he is having with his dudes at home. “Hey man, can you totally see me? What about now? I’m waiving! Sweet!” Not only does this annoy the people sitting behind you but those of us watching at home are now distracted by your genuflections. Sit down, your anonymous moment of fame is not impressive.

People That Boo the Defenseman Holding the Puck

Once or twice during a game a team will be making a line change and one of their defensemen will hold the puck behind their own net. For some reason there is a faction of fans that find this abhorrent. They will boo him, as if the five seconds he took to wait for his teammates to set up their break out was akin to clubbing baby seals. This is akin to booing a pitcher in baseball for throwing over to first base. What’s worse is that these fans sit quietly when the home team does the same thing. You do realize these guys are trying to win a game right? These fans are overly abundant in San Jose for some reason.

The more seasoned hockey fan welcomes newbies with open arms but if you don’t have all the rules down yet please refrain from loudly commenting on the game. We’ve all sat in front of this guy as he explains to his even newer fan friend what is happening on the ice. That’s annoying in its own right but when he starts berating a player for skating “right past the puck” on a delayed off-sides he has crossed a line. Why are these people always the loudest?

Some times the excitement and intensity of the game can get the best of well meaning people. As the tension builds up this fan wants to encourage his team so much that all he can think of is to yell “Skate!” over and over at the home team. It may go without saying that the players all realize they need to skate, but there are enough of these people to make you think otherwise. 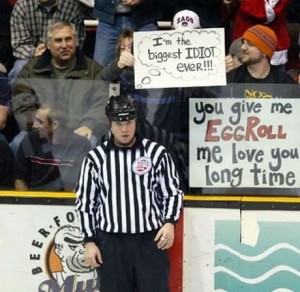 Fighting has always been a part of hockey and most likely will always play some role. But there are a group of fans who want blood all game long. Every time two players even glance at each other they are on their feet, blocking your view, and yelling for a fight. These are the same guys that you hear after a thrilling 4-3 double overtime playoff game complain that there weren’t any fights. If fighting is all you want go watch the MMA. The fights will be better and a tad more plentiful. You can find these fans in droves at WHL games.

Having a passion for your favorite team is a great thing. For many hockey fans they live and die with each line change as their team makes its way through a season. These fans are there every second and can be loud and mostly fun to be around. But when they see every check as a penalty against their team and every penalty as a dive it gets to be too much. Somehow their love for their team has blinded them from the rules of hockey (it should be noted that in some cases this also affects a team’s media – we’re looking in your direction Boston). It is possible for your team to commit a penalty. It happens, deal with it.

It’s always fun to come up with a clever and snarky comment to yell at a player from the opposing team. But if you’re going to do it, learn how to pronounce the guys name first. Nothing makes you look more like a moron then this. For a great example of this check out any episode of Coach’s Corner on CBC where Don Cherry butchers name’s left and right.

Guy With Own Last Name on Team Sweater

Yahoo’s Puck Daddy has done a great job chronicling jersey fouls over the years but putting on your own name takes the cake every time. This is forgivable when it is a child wearing the sweater as he has dreams of one day playing in the NHL. But the 40 year old guy with the bulging beer belly, stretching the sweater to its limits simply can not be allowed to put his last name on the back of his Sidney Crosby 87 sweater. The NHL shop should rethink this whole ‘customization’ concept.

People Who Taunt Players in the Penalty Box

Without question it is fun when the other team takes a penalty. It results in a power play and usually it is committed by some annoying player on the other team. While it might seem like fun to hurl insults at someone like Sean Avery we wonder how tough you’d be if there wasn’t five feet of plexi-glass between you and them? On top of that, whatever clever insult you’ve come up with is going to sound like a bunch of undecipherable yelling as you scream it through a seam in the glass. If you want to mock them go the route of Vancouver’s Green Men. Make signs, bring props and be creative with it.

There you have our list of the ten most annoying fans. Did we miss anyone? Feel free to mention them in the comments.