After spending a season and a half in Vancouver, Russian defenseman Nikita Tryamkin decided to get back home and signed a three-year contract in the KHL. In this translated interview, originally appearing on the popular Russian website Sport-Express, former Vancouver Canucks defenseman Nikita Tryamkin explained the reasons why he decided to get back, talked about playing in the KHL and remembered his time in Vancouver.

Igor Eronko: Did other KHL clubs try to sign you?

Nikita Tryamkin: I belong to Avtomobilist Ekaterinburg. I wouldn’t consider any other offer, even if Avtomobilist traded my rights away. I decided to get back to my home town and club.

NT: I think it’s the right length. I didn’t want to sign for one year, two years is also not enough, three years is great.

IE: In three years your rights in the NHL will still belong to the Vancouver Canucks.

NT: And what, you think it’s bad luck? I’m not going to say that the Canucks are a bad team. I can’t confirm that in three years I am getting back or that I am not getting back. Maybe a brick will hit me in the head and I won’t be myself anymore. We’ll have to see how I will play in that moment. If the team will feel like they need me, and we can find some good conditions, then anything can happen. But we’re still far from that.

IE: A Vancouver website had a pool on you, and the 51 percent of the readers responded that you’re not going to get back.

NT: So, they have decided already (laughs). We’ll see. Thinking about it now makes little sense. I’m still under contract.

IE: You can still buy it out.

NT: No, I’m not really doing this kind of things. I signed a contract and I want to honor it. And even more so considering that I’m very happy now.

IE: The Canucks got better this summer.

NT: They did a great job. The coaching staff changed almost entirely. I hope that Travis Green will make a good job there.

IE: He worked in Utica. And you didn’t join him there.

NT: I get to know him during the training camp. We even exchanged a few words. A good person.

Tryamkin and the Vancouver Canucks

IE: Willie Desjardins is not?

IE: What did you tell Alexander Burmistrov after he signed with the Canucks?

NT: I didn’t talk with him directly, but I congratulated him. I’m more in touch with Nikolai Goldobin. It’ll be interesting to see how he does in the training camp, as I cheer for all the Russians. I really want that Russian players will play in the respective main squad. He’s a very good player, talented, fast.

IE: I have talked with Desjardins this summer and he said that Goldobin needs to mature.

NT: I’m not a coach, of course, but I think that he should be given more chances. He’s a small player, very rapid, with great hands, he can score goals. He scored in his very first game, and then he was sat for ten minutes. Where’s the logic? Then he scores against Arizona, and he gets benched again. He scored against Edmonton in the very last game. We both scored, we were pretty much playing on the same line, and then he got sat again. If a player doesn’t play, how can he mature? How can you understand if he can play?

IE: Is that the reason why you got back here?

NT: Many times I was left out. It was almost always me. I couldn’t understand why. I played well, and then at the end of the game I don’t get to play without an explanation. It was a bit strange.

NT: That was true too. And also for hockey reasons. All of these together brought to this situation.

IE: The Canucks offered you a two-year, one-way contract.

NT: I didn’t get back home for the money. I got back home because I wanted to play. To play a lot. Here I have good ice time, and I can feel the trust. I couldn’t in Vancouver. I was okay with playing less at the start, but then my ice time should have grown. But it did not. And all this considering that our defensemen picked up many injuries.

IE: After the first couple of games back in Russia your icetime was lower than in the NHL.

NT: I played some thirteen minutes in the first game. But you also need to think that we play in four pairings here, so if you divide the sixty minutes by four pairings, you’ll get pretty much this kind of results. But then it was good, and I started playing more than twenty minutes a night. I like to play a lot. Playing more means having more chances to improve.

IE: Playing with Avtomobilist you’re shooting twice more you did in Vancouver.

NT: I’ve been told to shoot if I have a chance. I could shoot even more, but sometimes the game is at our crease. I like shooting, and I like scoring even more.

IE: In one of your first games you scored a very unusual goal going from one end to the other. 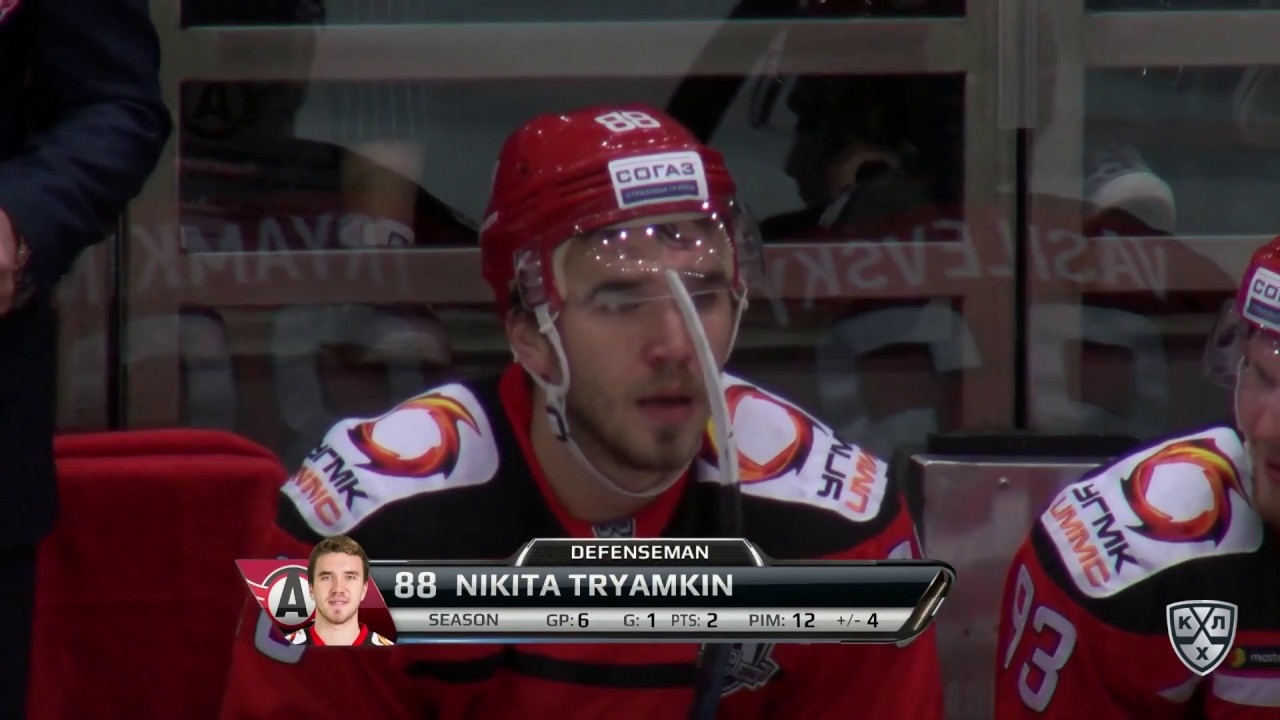 NT: Before the games, our coaches tell our forwards to attack the net. I did it and I scored. It ended up pretty good.

IE: Do you feel better?

NT: Of course. You should try yourself to bring around all that weight (laughs). When I was in North America I tried to improve my body through better nutrition. Now I like to eat what doesn’t get me fatter. I don’t like being fat.

IE: What really happened when the Canucks wanted to assign you to the AHL? Journalist Jason Botchford wrote that the deal was in your weight.

NT: Tell him “Hi” from me. It wasn’t my weight. The Canucks weren’t happy with my physical conditions. But I worked hard, showed what I was worth and tried even harder. I have been told to play in the AHL, but that was on the other side of the continent: a six-hour flight to New York, then another three hours by car just to play one or two games in a weekend and then get back? How in the world could that have been useful to me? What kind of condition boost could I get? I practiced for half a hour, then I stayed in with the guys and then practice alone. After that I rode the exercise bike. I really wanted to show that they were wrong.

IE: And in January, Desjardins said that he wasn’t right.

NT: Yes, I showed what I was worth. It was good from him to admit that he wasn’t right. I had some periods where I couldn’t understand him too much, but generally speaking, everything was more or less pretty good.

IE: Vancouver is different from many other cities regarding fans. In Toronto, it’s quieter.

NT: I loved that in Vancouver. After a hit, or a shoot, the whole crowd goes “wow”.  And many other sounds. When I had a big hit and listened to the crowd, I could hear the adrenaline in my blood. There was a game where I had five or six hits, and after that fans started calling me “train” or “crusher”.

IE: Desdjardin said that if you could play like that every night, then you could become a top-pairing defenseman for any NHL team.

IE: Are the Sedins treated like gods in Vancouver?

NT: I have never seen players who are such professionals as they are. Even at their age, they are truly great. They can always score at least 40 points.

IE: But they never scored so little. Only when you were in the team.

NT: Curious stuff, isn’t it? (laughs). The Sedins were unbelievable, too bad that they never won the Cup. At least they won the Olympics. And this season’s Olympics… it could have been their last chance to play there. But the older Sedin said “Well, we already won it.” They were great, both as players and as persons.

NT: And Jack Skille in Minsk too. Hopefully they’ll enjoy the experience and get to play at the Olympics.

IE: The level is really that different in the NHL and in the KHL?

NT: Well, it’s not that big. The deal is more on the players’ role. They used to play on the third or fourth line in the NHL. They have a lot of trust here. You know, Vey plays with Nigel Dawes in the KHL.

IE: I’ve heard many things about Vancouver and use of substances.

NT: Yes, that aspect exists. They smoke weed everywhere. The city was like in the fog. Everywhere you go it’s not just smell, it really stinks of weed. Sometimes we could smell it from our place at the tenth floor.