If you’re from Winnipeg or ever spent any amount of time in the city, you have heard stories about the north end. You’ve heard about the shootings, the drug abuse and gang activity. Now depending on whom you are and how long you stayed here, you may or may not have heard about some of the people who grew up in this community. If you take a second, look past some of the alleged problems and look at the faces, you will see a different story. You will see hard-working, 9-5ers, who are proud of where they are from and who they are today. Tom Zajac is one of those faces.

As you drive over the Salter Bridge, you will see a message written on the roof of one of the local businesses. Welcome To The North End with the weathered subheading People Before Profit. If you continue north on Salter Street you will eventually hit the community of Garden City, the home of Tom Zajac, his wife Trish and their four boys: Travis, Darcy, Kelly & Nolan. The home where Tom, a gas station owner/operator, has preached pride, hard work and perseverance, since 1985. 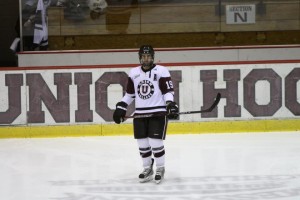 If you were to ask the Zajac’s neighbours, they would tell you that Tom’s life lessons to his boys weren’t the only thing heard from the home. “You should’ve seen the mini stick games we had down there”, Kelly Zajac, reminisces, “There was a big age gap and no rules”. Kelly, the second youngest of Tom and Trish, is in his third year of pro after finishing off his NCAA career at Union College. He scored 128 points in 159 games with the Ivy League team, graduating with a degree in Economics.

After graduation in 2012, Kelly joined his brother Darcy with the New Jersey Devils’ AHL Affiliate, the Albany Devils. Beside a short stint in the ECHL, he has been there ever since. While Kelly and Darcy battle on the farm, their older brother Travis, a former first round pick in 2004, is in his ninth season with the big club. Then there is Nolan, the baby boy, who after two years in the USHL decided to attend the University of Denver where his Dad played, 40 years earlier. Yes indeed, Tom and Trish have lots to be proud of. However, just like the neighbourhood they grew up in, there is more to their journey than meets the eye.

You have heard the stories of politics in hockey and the family members who have ridden the coattails of their sibling or parent. Let me be completely clear: this is NOT one of those stories. Yes, it is true that Travis was drafted 20th overall after two seasons with the Salmon Arm Silverbacks of the BCHL. It is also true that he left the University of North Dakota early and only played two games in the AHL before being a regular with the Devils. One would think that he was paving the way for his brothers to follow in his footsteps. The hockey world had other plans.

Even with the success of Travis at the junior, NCAA and professional levels, scouts and coaches alike had their doubts about the younger brothers. They enjoyed early success but as the boys grew older it became clear that their last name was not going to be good enough to get them on the team. When it came time to play AAA, Darcy was moved from his traditional forward position to defense just so that he could make the team. When it was Kelly’s turn, he was cut altogether, forcing him to go play across town with one of the worst teams in the league. Tom wasn’t about to let his boys feel sorry for themselves “Work harder, train harder and the rewards will come”. They listened.

Both Darcy and Kelly would go on to play for the Silverbacks just like their brother, Travis. They even lived with the same billets, Bill and Shelley Dawson, each one after the other. Kelly and Darcy would both go on to careers in the NCAA, Kelly with Union College and Darcy with the University of North Dakota. They would have to prove themselves at every level, earning the respect and trust of coaches and teammates alike. This meant adapting to new environments, new systems and new roles.

Darcy Zajac is all too familiar when it comes to adapting to new roles. Darcy put up 80 points in his final year of junior and another 54 throughout his four years at the University of North Dakota. It was clear that the former captain of the Silverbacks was being conditioned to more of a two way game once he hit the NCAA. However, it wouldn’t be until he made the jump to the Devils’ franchise that his game and mentality would make the biggest change to date.

Darcy’s numbers have always been consistent but when he made the move from the flatlands of North Dakota to the state of New York, there was one stat that would make a gigantic leap. Since joining the Devils’ organization, he has amassed 40 fighting majors over the past four seasons. “I think Darcy knows what he has to do to get to the next level”, states Tom, “He is a big guy and I’m confident he can take care of himself”. Darcy not only takes care of himself, but provides solid two-way play, while making room for other players. “He is my brother so he has to protect me”, Kelly jokingly remarks. However, there is no joking when examining Darcy’s fight card, a list that features the likes of Tom Sestito, Zac Rinaldo and Bobby Farnham.

It is obvious that the Zajac boys have come a long way from the days of mini-sticks in the basement on Consulate Road. Their off-ice and on-ice lives have taken curves and right hooks along the way. One thing that has remained are the principles and mentality that Tom and Trish instilled at that young age. The goal is the NHL, but the reward is in the journey and keeping that bond, whether that means helping out with Travis’s children or Nolan’s homework. The Zajac family is making their own stamp on the hockey world and it is definitely one to be admired.