As training camp and the overstretched NHL preseason finally begins to wind down, the Calgary Flames find themselves in the unique position of having three goaltenders currently signed to one-way contracts.

In terms of training camp storylines, the “problem” of having depth at perhaps the most important position in hockey is by no means an area that is high up on any NHL executives lists of issues heading into a new season.

The lack of a bona fide No. 1 starter, however, is definitely a less-than-ideal situation for a young team that is looking to improve upon their successful 2014-2015 NHL season.

With the emergence of up-and-coming goaltender Joni Ortio, the Flames’ well-publicized 2014 goaltending tandem of Jonas Hiller and Kari Ramo will have another goaltender to compete with as the debate over which two netminders the team will go with in the 2015-2016 season reaches its final days.

Hiller signed a two-year, $9 million contract with the Flames in the summer of 2014 after spending the previous seven years with the Anaheim Ducks.

The former All-Star was red-hot out of the gate for the Flames, and his strong play saw him unanimously emerge as the team’s starting goaltender for the first part of the 2014 season.

Despite these periods of brilliant play, Hiller’s numbers cooled as the season wore on–A trend that has plagued the 33-year-old Swiss netminder throughout his career. Despite his streaky track record, Hiller was chosen as the Flames’ Game 1 starter in their Conference quarterfinals matchup against the Vancouver Canucks.

Despite appearing in seven of their 11 postseason games, Hiller was replaced as the Flames’ starting goaltender after being pulled in consecutive games.

Hiller, who turns 34 in February, undoubtedly wants to prove that he still can be relied on as a starting goaltender in the NHL. The clock is definitely ticking though, and there have been rumours since the trade deadline that the Flames would be interested in parting ways with Hiller, and his remaining cap hit of $4.5 million. 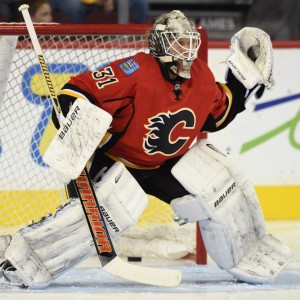 Despite playing in fewer games than Hiller throughout the season, 29 year-old Finnish goaltender Kari Ramo emerged as the Flames’ more reliable option down the stretch, appearing as their starting goaltender for their final three playoffs games against the Ducks.

Despite his unorthodox style of play – that is by no means for the faint of heart – it appears that Ramo has the inside track over Hiller as the goaltender of choice for head coach Bob Hartley moving forward. His one-year, $3.8 million contract extension this offseason is a clear indication of the team’s commitment to having Ramo in the mix for the upcoming  2015-16 season.

Despite this, however, Ramo has never appeared in more than 40 games in a NHL season. The 50- to 60-game workload of a typical staring goalie seems unrealistic for Ramo, given his performances to date. He seems to be best fit for a 1A, 1B goaltending unit.

Drafted in the sixth round of the 2009 NHL Draft, Finnish goaltender Joni Ortio’s strong play and development while playing in the American Hockey League has placed him right in the thick of the Flames’ goaltending discussion heading into the 2015-16 season.

Despite having only 15 games of NHL experience, Ortio has impressed at the NHL level, even with his limited sample size, most notably winning four of six games in a brief sting with the Flames last winter.

Now that the 24-year-old netminder is waiver eligible, the Flames have to worry about the almost inevitable reality of him being claimed by another NHL club if they attempted to send him back down to the minors.  With this is mind, it is hard to imagine any scenario that would result in the Flames taking the risk of losing their potential future goaltender for nothing.