Following the news that the Arizona Coyotes would be moving on from long-time captain and veteran forward Shane Doan, it is being reported by Sarah McLellan of AZ Central Sports that 25-year-old defender Oliver Ekman-Larsson will be named the next captain of the Coyotes franchise. Dating back to the beginning of the Coyotes tenure in Arizona in 1996, there have only been three captains of the franchise. The first was Keith Tkachuk who was the captain in Arizona from 1996 until 2001. Teppo Numminen then took over the role from 2001 until 2003, and Doan filled the role from 2003 all the way until 2017. With big shoes to fill, Ekman-Larsson will no longer just be the face of the franchise, but the captain too.

Drafted by the Coyotes with the sixth-overall draft pick in the 2009 NHL Entry Draft, Ekman-Larsson has made a name for himself as one fo the very best blueliners, not only in the NHL, but in the entire world. Widely considered for the last few seasons to be the face of the Coyotes franchise and the new cornerstone piece for the team to build around, Ekman-Larsson is now 25 years old and has played in the league for seven seasons – debuting in the 2010-11 season just a few months after being drafted. In 494 career games, Ekman-Larsson has scored 88 goals and 248 points, including five seasons with double-digit goals and two consecutive seasons of 20-plus goal in 2014-15 and 2015-16. 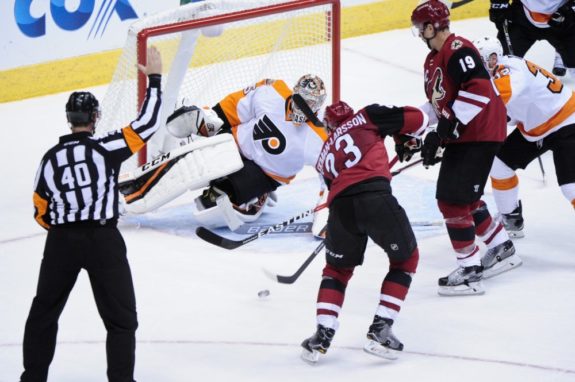 Very few players look as good on the ice as Ekman-Larsson, who excels on both the offensive and defensive side of the puck. As made evident by his impressive point totals each season, offense isn’t an issue for the Karlskrona, Sweden-native. Fortunately for the Coyotes, Ekman-Larsson isn’t a defensive liability either and can be relied upon to shut down opposing team’s best players. While the Coyotes might not be a team ready to compete for the Stanley Cup yet, Ekman-Larsson has the potential to be the next long-term piece, similar to what Doan was up until 2017. Signed for another two seasons at a reasonable $5.5 million cap hit, Ekman-Larsson isn’t going anywhere anytime soon.

Coyotes Moving on From Doan

Making the decision to move on from Doan couldn’t have been an easy one for the Coyotes. Though the veteran forward is now 40 years old and has played with the same franchise for over two decades, the Coyotes are moving in a different direction centered around youth, rather than veterans. Doan is still one of the best leaders in the entire NHL and should have no shortage of teams contacting him in search of a veteran leader to plug into their lineup to help better acclimate their youth to the NHL. Moving on from Doan is the decision that the team made and without a doubt considered heavily as the loss of his leadership is irreplaceable.

For Doan, this is a new chapter. Playing on the same franchise for his entire career, playoff opportunities have been few and far between. Getting the opportunity to play for a team that could be closer to the postseason than the Coyotes might serve to be a blessing in disguise for Doan. It isn’t a guarantee that Doan will play with another team next season, but signs point to him wanting to return for at least one more year.