I met Tom Renney once.  Sat next to him on my flight to Minneapolis for the 2011 NHL Entry Draft.  Great guy, and you can instantly tell why players are drawn to him and view him as a “players coach.”  Unfortunately though, Renney is coming off the worst season of his coaching career; one that landed him Ryan Nugent-Hopkins as a consolation prize.  With Oilers fans expectations raied this year after a slew of off-season acquisitions, let’s look at how and where Renney has had the most success as an NHL Head Coach.  TSN recently showcased the Oilers in their “30 Teams in 30 Days” series. 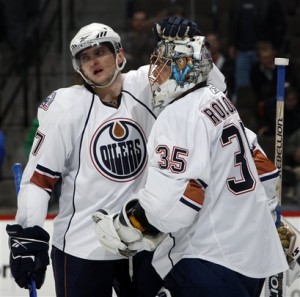 Edmonton is Renney’s third stop in the NHL.  His career started off with the Vancouver Canucks in 1996-97 at the age of 41.  On a team consisting of forwards Alexander Mogilny, a 25 year old Pavel Bure and Martin Gelinas, the team scored 257 goals; placing 5th in the NHL in this category.  However on the defensive side, the team allowed 273 goals and checked in at 21st out of the 26 NHL teams.  Also of note is that the Canucks three goaltenders (Kirk McLean, Corey Hirsch and Mike Fountain) combined for a save percentage of well below 0.900 at 0.892.

The team’s leading scorer was Mogilny at 73 points, and Dave Babych led all Canucks blueliners in points with 27 points.  As expected with a very offensive team, the Canucks placed higher than average powerplay numbers and a lower than average penalty killing percentage.  Also of note is that there were four members of the team that had greater than 100 penalty minutes.  The 1996-97 Canucks, with their offensive firepower, were unable to reach the playoffs and finished 4th in the Pacific Division and were 5 games below 0.500(35-40-7).

The next season, Renney coached another offensively adept Canucks team, however after a 4-13 start, he was promptly fired and replaced by Mike Keenan.  What we’ve learned about Renney thus far is that on a team lacking any true offensive stars or true puck-moving defensemen, he was still able to ice a lineup that was among the top of the league in goals. What we’ve also learned is that his goaltending and overall team defence played a key role in his departure from Vancouver, and that he relied heavily on enforcers.

Tom Renney’s first full season in New York occured after the NHL lockout in 2005-06, a time that seems like decades ago when the Edmonton Oilers were battling for the Stanley Cup.  This season was Renney’s best in terms of regular season performance, as his Rangers finished with 100 points and yet placed 3rd in an incredibly deep Atlantic Division.  His top-4 scorers were all atleast 33 years old and European (Jaromir Jagr, Michael Nylander, Martin Straka and Martin Rucinsky), with Jagr enjoying the third best season of his illustrious career with 123 points.  The second leading goal scorer, Petr Prucha, played just 13:42 per night and yet managed 30 goals playing mostly with Jason Ward and Blair Betts on the Rangers 3rd line.  Jagr played over 22 minutes/night, a rarity for a forward.

Defensemen Sandiz Ozolinch and Michal Rozsival led the team in icetime, at 23:48 and 22:27 per night respectively.  The team was markedly different from the Canucks Renney coached nine years prior.  The Rangers finished 11th in the league in goals for and 4th in goals against, and were above average on both the powerplay (led by Prucha’s 16 goals with the man advantage) and penalty kill.  Also of note is that a 23 year old Henrik Lunqvist started 58 games for the team, backed up by 30 year old journeyman Kevin Weekes; and a 22 year old Fedor Tyutin averaged over 20 minutes/night on the Rangers blueline.  Another interesting point is that the Rangers didn’t emply a true enforcer, as Darius Kasparitis led the team in penalty minutes while still playing over 17 minutes/game.

What we can infer from all of this is that Renney’s coaching strategy changed markedly from his time in Vancouver to his first season in New York, which was the most successful regular season of his career.  With the offensive firepower of Jaromir Jagr, Martin Straka and Michael Nylander he was still able to play two-way hockey; with defense being responsible for much of the team’s succes.  Also, he placed trust and faith in young players (Lunqvist and Tyutin) playing critical positions; and they rewarded his faith.  He also strayed from his ideas in Vancouver of dressing multiple enforcers, as only Ryan Hollweg could be considered an enforcer on this Ranger’s roster.  Unfortunately in spite of the 100 point season, the team was swept by the New Jersey Devils in the first round of the playoffs.

These trends continue throughout Renney’s tenure in New York.  His teams always placed at or above average offense and well above average defensively, with special teams being above average as well.  Another trend to notice is that there is one (sometimes two) forwards that play significantly more (3-4 minutes more/game) than the others.  Jagr was that player in 2005-06, ’06-07 (along with Michael Nylander) and ’07-08; and centers Scott Gomez and Chris Drury shared the title in Renney’s final season with the team in 2008-09.  Unfortunately, Renney could not lead the Rangers past the second round in any of his three full seasons, and was fired midway through the 2008-09 season.

Tom Renney’s first season in Edmonton should be judged with a grain of salt with a full rebuild taking place, however we again get the sense that he is a very defensive coach.  The top-4 players in terms of icetime were all defensemen, and no Oilers forward averaged close to 20 minutes/game.  Also, no regular Oilers defenseman averaged less than 15 minutes/game.

This season, the Oilers could very well have four players have 60 point seasons (Jordan Eberle, Taylor Hall, Ales Hemsky, Ryan Smyth/Shawn Horcoff/Sam Gagner).  What Renney’s coaching track record suggests it that he is able to get offensively gifted forwards to buy into a two-way game, and relies heavily on one or two to play almost the same amount as defensemen.  The saying “Defense wins championships” is one that Renney has undertaken after his Vancouver Canuck days.  New additions Cam Barker and Eric Belanger will boost very anemic special teams, and the sophomores will have more experience under their belt.

Renney has also shied away from using enforcers who cannot play more than 8 minutes/night.  To accomodate him, Steve Tambellini signed winger Ben Eager, a noted tough guy who played over 10 minutes/night last year in San Jose, and who has the legs and leadership qualities to fit into the Oilers.  Expect Ryan Whitney to average close to 25 minutes/night, and Shawn Horcoff to play over 20 minutes/night.  The team could, with their tremendous depth on the wings, ice three scoring lines with Eric Belanger centering Linus Omark and Teemu Hartikainen while still playing 15 minutes/night and causing matchup problems for opponents.  “Do we put Iginla against the Hall/Eberle line, or should he play on Hemsky/Paajarvi?  What about Omark/Belanger?”  Either way, this season promises to be an exciting one for the Oiler Faithful.

4 thoughts on “Optimal Renney: In What Conditions Does the Edmonton Oilers Head Coach Thrive?”