The Detroit Red Wings have struggled to compete with the Florida Panthers during the past two seasons.  They were 2-1-2 against their Atlantic Division foe last season, and after a 3-1 loss to the Panthers on Thursday, they fell to 1-2-1 this season.

It doesn’t make sense to me either, Graham.

Why the Red Wings constantly play down to their opponents is a concept that I haven’t been able to grasp. They get annihilated 7-2 by the Philadelphia Flyers, play one of their best games of the year in a 5-1 win against the Pittsburgh Penguins, then come down to Florida and look inept against the Panthers.

They had scoring opportunities against the Panthers, but a good portion of their shots went wide or high. And the shots that did go on net were from above the faceoff circles.

As you can see in the shot plots below from War-on-Ice, the Red Wings had just five of their 26 shots from the mid-slot or lower. The Panthers did a fantastic job of keeping shots to the outside and making life easy for Roberto Luongo. And if the Red Wings did get an opportunity in the slot, it was blocked, as Florida had six blocked shots in the slot. 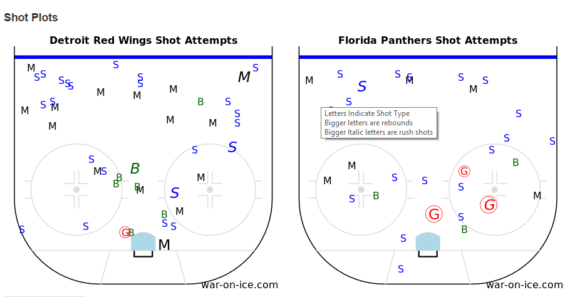 Of course, missing Pavel Datsyuk doesn’t help the cause, but having Datsyuk in the lineup also hasn’t helped the Red Wings fare much better against the Panthers this season.

Despite not getting their names on score sheets much in the past couple of months, Gustav Nyquist and Tomas Tatar still are tied for third on the team in scoring with 48 points. However, if the Red Wings want to finish the regular season strong, these two will need to pick up the offensive contributions.

Nyquist has just two goals in his past 19 games, and Tatar hasn’t scored at all in March. We all knew Nyquist wasn’t going to be able to sustain the scoring rate he achieved last year, but the drought he is going through right now clearly is affecting his willingness to shoot the puck.

The Red Wings have lost five of their past seven games and hold just a four-point lead over Boston for the third playoff spot in the Atlantic Division, but it’s not time to panic. Darren Helm returned to the lineup against Florida, but he did look a bit rusty having missed the past seven games with a strained oblique.

But don’t sell his return short. His presence in the lineup completely changes the dynamic of the team, and they’ll need him down the stretch. Once Helm gets back up to game speed, Datsyuk should be back in the lineup, and the Red Wings can focus on closing out the season strong.