At their annual “Free Game For Kids” on Saturday — with 18,004 little hockey players and fans in attendence — the Penguins unveiled a new 1-3-1 forecheck popularized by Boucher and his former team, the Tampa Bay Lightning.

That’s the collective groan of hockey fans who shudder at the words ‘trap’ or ‘1-3-1’.  Most of them remember the night in 2010 when the Philadelphia Flyers made a mockery of the Lightning’s new forechecking system:

Tampa Bay rode the innovative scheme to an improbable Eastern Conference Finals appearance that season, but two years later Boucher was out of a job.  A number of teams have since adopted the 1-3-1 forecheck — Washington under Bruce Boudreau, Buffalo under Lindy Ruff, even the Flyers at times — and the increased exposure has helped opposing coaches gameplan against it.

That hasn’t stopped the Penguins from dabbling in the strategy this preseason.

One of the biggest criticisms of Pittsburgh coach Dan Bylsma has been his inability (or unwillingness) to adapt.  Bylsma and his staff have made a number of small changes to their system over the years, but their basic attack strategy of stretch-pass-and-tip-in has been relatively permanent.

Assistant coach Jacques Martin was added in the offseason to bring some fresh ideas to the staff.   A number of his tactics have already been incorporated into the Penguins’ gameplan.  The 1-3-1 forecheck is another wrinkle the team has added to cater to the strengths and weaknesses of the current roster.

Here are the basics: 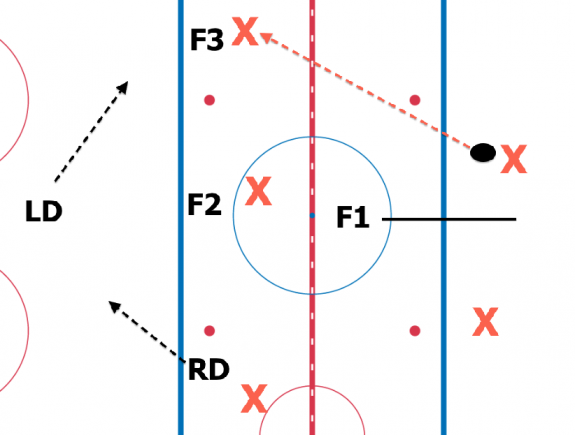 The Dallas Stars used to run a 1-3-1 with both defensemen in the middle of the ice, but this forces both wingers to play strong defense along the boards.  Boucher’s version (diagrammed above) featured one defensemen back and one on the side wall — a formation that fit his lineup well at the time.

The more aggressive defenseman was often the better skater, such as the undersized (and defensively deficient) Marc-Andre Bergeron.  The back defenseman was typically Victor Hedman or Pavel Kubina, who doubled as a road cone on some shifts due to his lack of mobility.

The Penguins’ defense features many of the same characteristics.

Kris Letang struggled defensively at times last season but can skate like the wind and could be one of the league’s most effective forwards if he ever decided to make the switch.  He plays more aggressive as the RD and challenges the winger on the boards.

Brooks Orpik and Rob Scuderi are far more responsible defensively.  At age 32 and 34 respectively, both have started to slow down in recent years as well.  They roam the back end, supporting to the right or left when necessary.

The Boucher 1-3-1 setup is also valuable because it can be disguised as another trapping system.  Most teams in the NHL employ some form of neutral zone trap.  The Penguins under Bylsma have often used a 1-2-2 swing setup detailed in this post by Jesse Marshall at Faceoff Factor.  It isn’t difficult for them to quickly rotate into a 1-3-1 from that starting point.

Let’s look at a diagram: 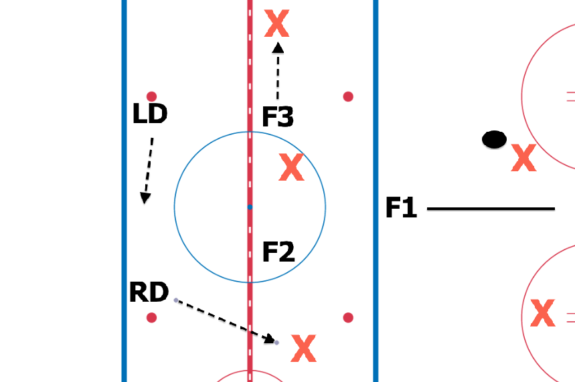 From the initial 1-2-2 setup, most players only need to take a few strides to move into the 1-3-1 formation.  This can be very difficult for an opposing team to read, especially when they’re expecting the Penguins’ typical 1-2-2 forecheck in the neutral zone.

Most teams try to break the Penguins’ 1-2-2 trap by firing cross-ice passes to the winger on the far side.  With a defenseman like Kris Letang given the green light to step up aggressively and take away that option, Bylsma’s team might be able to create a ton of turnovers this season.