With Beau Bennett, Christian Ehrhoff, and Craig Adams returning to the Penguins’ lineup, the co-leaders in the Metropolitan Division defeated the Carolina Hurricanes by a score of 2-1, with a late goal coming from the stick of Brandon Sutter. 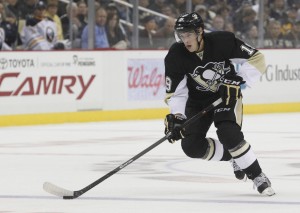 Heading into the last game of 2014, the Penguins were struggling with a 0-3-1 record in their previous five contests.  Bennett’s return to the lineup brought an immediate offensive spark with the injuries to wingers Blake Comeau and Patric Hornqvist.  Trailing 1-0 from an Eric Staal tally, Bennett found Chris Kunitz open in the slot with 22 seconds remaining in the first period to knot the up game heading into the first intermission.

It would not be until late in the third period where the Penguins would take their only lead of the contest as Brandon Sutter whipped home a wrist shot past Cam Ward with 1:42 remaining in regulation.  Bennett, once again, came up with the primary assist, notching two points in his return to action after missing the previous 16 tilts.

Aside from a needed two points, the Penguins ended an injury riddled 2014 calendar year with three opening night players returning to the team and contributing effectively.  Bennett’s two primary assists led the offensive charge, while Ehrhoff played a solid game defensively, registering six shots, three blocks, and two hits during his 25 minutes on the ice.  Adams led the team, and all players with seven hits on the evening.

Marc-Andre Fleury secured the victory from the second period on, making key saves against Jiri Tlusty at the end of the second period, and Elias Lindholm in the third on a two-on-one breakaway opportunity.  Fleury’s 24 saves earned him First Star honors and his 20th win of the season; second best in the NHL.

Carolina is ranked last in the Eastern Conference (10-23-4), but had a solid showing against an injury riddled Penguins squad.  Pittsburgh, however, will not have an easy Jaunary.  The Penguins play 12 games in the first month of 2015, starting off with the Tampa Bay Lightning on January 2nd, followed immediately by the Montreal Canadiens the following night.  Other key match-ups to keep an eye on throughout the month are the Boston Bruins (January 7th), Canadiens (January 10th), New York Islanders (January 16th), and Washington Capitals (January 28th), just to name a few.

With key players like Olli Maatta, Patric Hornqvist, Blake Comeau, and Pascal Dupuis out for an extended period of time, the Penguins will surely struggle against some of the top teams in the league.  What is encouraging is that they are slowly, but surely getting healthier.  Forward Steve Downie skated with the team prior to their victory over Carolina and is expected back in the lineup shortly.  Defenseman Paul Martin is also close to rejoining the Penguins’ blue-line.  With Downie’s grit and raw energy, combined with Martin’s calm and composure, the Penguins will bring back two key players into the fold that will make the struggling less frustrating.

As 2015 approaches, the Penguins’ resolution has to be the same as it has been for the last couple of season; to have a healthy team.  In the calendar year of 2014, the Penguins’ have lost over 4oo man-games due to injury and/or sickness.  Key players like Pascal Dupuis, Kris Letang, and Olli Maatta have been a few of the unfortunate players to miss extended periods of time.

With Hornqvist and Comeau, arguably two of the best acquisitions made in the off-season by the Penguins, out for a while more, the Penguins will need to bond together even more so than they have in the past two weeks.  One of the many things the Penguins can be thankful for this season is how well their call-ups have fit into the lineup and given them a chance to win each and every night.  Players like Derrick Pouliot, Scott Harrington, Brian Dumoulin, Bobby Farnham, Bryan Rust, and Andrew Ebbett have filled in and contributed to their respective roles and have done and admirable job.  The playing time has helped these players develop, but also allowed the coaching staff to see who can play in the key moments if more injuries are to develop throughout the second half of the season.

With 2014 coming to an end, if one statement were to sum up the Penguins’ it would be change.  Firing Ray Shero and Dan Bylsma, hiring Jim Rutherford and Mike Johnston were office changes that needed to be made after years of disappointment.  Trading away James Neal for Hornqvist and Nick Spaling was the first shot in the arm for the complacent Penguins’ locker room.  The loss of Brooks Orpik, Matt Niskanen, Deryk Engelland, Tanner Glass, Lee Stempniak, and many others made room for key role players like Comeau, Downie, and a healthy Marcel Goc.  Christian Ehrhoff’s comfort level on the blueline increases with each game played and the maturation of the past building blocks like Sidney Crosby, Evgeni Malkin, and Kris Letang has spread throughout the new Penguins’ roster. 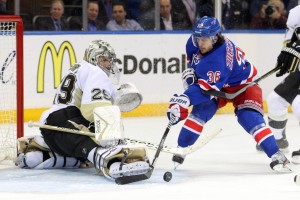 Lastly, Marc-Andre Fleury’s stellar play in the first half of the season is Vezina worthy.  He is sixth in games played (30), fourth in goals against with goaltenders who have played 15 or more games (2.12 GAA) and has a .928 SV% which ranks 11th in the league.  His 20 wins are tied for second in the league and his six shutouts rank atop the NHL.

The Penguins are getting healthier, one player at a time and still sit atop the Metropolitan Division.  Their overall play has been noticeably different compared to past seasons and there is a spark in this team that has been lacking for several years.  With a rough January to start off with, the Penguins will look to get on a winning way once again and more importantly, get healthier as they attempt to make a run at Lord Stanley’s Cup with arguably their best assembled team since the 2008-2009 winning squad.