The Pittsburgh Penguins’ forward group has, quite possibly, been the most perplexing assembly of individuals in hockey this season.

Despite boasting one of the most star-studded, dangerous-on-paper lineups in recent history, they spent the first three months of 2015-16 dwelling the basements of NHL scoring lists. They were bottom-of-the-barrel in almost every statistical category for offense and their stars were struggling. In fact, it’s safe to say that they were simply a bad team.

When Mike Johnston was fired and Mike Sullivan took over the head coaching duties on December 12th, there was an immediate change of pace for this forward group. The results weren’t immediate but you could see that they were playing a more up-tempo style of hockey and individuals like Sidney Crosby, who had struggled mightily to produce under Johnston, started to look like superstars again. Sullivan’s system allows for creativity but still provides structure. Most importantly, it allows for offensive onslaughts, which is what this team is built for.

Statistically, the Penguins have done a complete 180 in terms of how they stack up against the rest of the league on the offensive side of things. Pittsburgh is eighth in even-strength goals-for since the calendar turned to 2016. They’re seventh in high-danger scoring chances and maybe most importantly, since it was a huge reason for their lack of scoring early on, they rank tenth in on-ice shooting-percentage with a 7.5-percent. That percentage is still a bit low for this roster but it’s a far jump from the 6.3-percent they had with Johnston at the helm, which was good for 24th in the NHL.

The top-six in Pittsburgh is arguably the most talented group in the NHL, mainly due to their two world-class centers in Crosby and Evgeni Malkin. They’ve recently received a facelift with David Perron going to Anaheim in exchange for speedy winger Carl Hagelin, and the move seems to have sparked Phil Kessel as he and Hagelin are an almost unmanageable dose of speed alongside Malkin. Just how good has that trio been so far? (stats courtesy of puckalytics.com)

The combination of Hagelin and Kessel has resulted in numerous odd-man breaks due to their speed up ice and Malkin is benefitting from the two of them constantly putting opposing defenders on their heels. If they can keep creating space for Malkin, while Kessel chips in with the type of scoring we’ve seen as of late, this will be a tough line to account for down the stretch. Especially when you consider how well the Penguins’ top line is performing.

There’s no secret to the success of Crosby’s line, which mainly consists of Chris Kunitz on the left and Patric Hornqvist on the right. It’s quite simple; Kunitz and Hornqvist go as Crosby goes. Now that number 87 is hitting on all cylinders, both of his line mates are benefitting greatly and shedding their early season scoring slumps. So far in 2016, that line has accounted for over 55 minutes of time-on-ice with seven even-strength goals-for and only two against. They also boast a whopping 73.8% Corsi-for percentage. If you were concerned about Crosby earlier in the season, you weren’t alone. However, it’s clear that Crosby is back and looks poised for a huge second half.

The Penguins finally have a top-six that’s nearly impossible to match-up against and really, who knew they were only a coaching change and Hagelin acquisition away from accomplishing that?

Bottom-Six Still a Work in Progress

The Penguins’ bottom-six group is in need of a shot in the arm. Or, better yet, a shot that finds the back of the net. While they’re getting solid play from a few of their depth forwards, the bottom half of this lineup isn’t contributing enough. Nick Bonino, prior to his recent injury that will sideline him for an extended period of time, was on pace for only 19 points this season. His injury paved way for Eric Fehr to see an increased role, which he deserved, but Fehr was also injured vs. the Ottawa Senators on Tuesday night. We don’t know the extent of that injury yet but it didn’t look good and the Penguins are running out of options right now.

Speaking of those options… 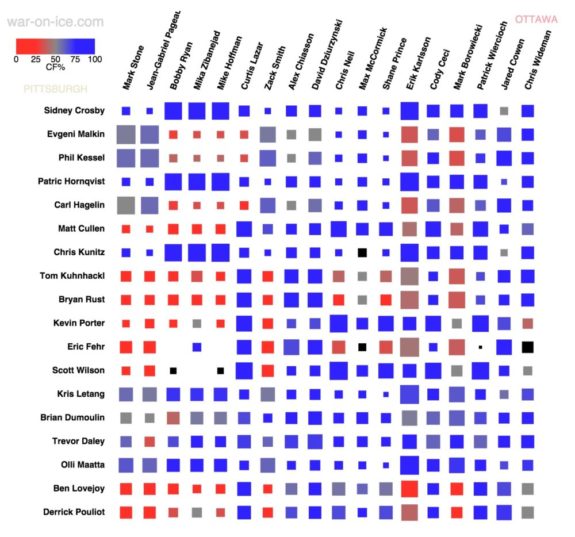 The above chart via waronice.com looks intimidating but I’ll make it easy for you. The Penguins are on the left, with the Senators listed across the top. The point in which two players meet reflects how successful they were based on Corsi events. The bigger the square, the more time they played against that individual. Tom Kuhnhackl, Bryan Rust and Kevin Porter are being insulated, with their success highly dependent on favorable matchups. It’s simple, the Penguins can’t sustain success with that many AHL forwards for an extended period of time. If Fehr’s injury is severe enough to keep him out down the stretch, it could pose a serious issue to Pittsburgh. The above results aren’t a one-time occurrence in the Ottawa game but rather an ongoing trend. It’s troublesome but luckily for the Penguins, not detrimental just yet.

I totally understand what Porter brings on the penalty kill. So far, the numbers prove that he has been a nice boost on that unit. However, he’s far too ineffective at even-strength to continue getting looks over Sergei Plotnikov. Sullivan needs to infuse Plotnikov and let him fight through his growing pains. Plotnikov has been a disappointment so far but he at least drives possession and creates offense while Porter does none of the above.

I continue to be amazed at how poised this team has become under Sullivan. While Malkin did take one of his signature bad penalties out of frustration last night, they’ve been few and far between for not only him, but the entire roster. The most impressive part is how they never seem as if they’re out of a game. This lineup keeps pushing and no matter what deficit they’re staring down, they always seem to climb back into the thick of things. That bodes well for a team looking to make a deep playoff run.

Rutherford may need to change his focus for the trade deadline and while he can’t necessarily ignore the blue line, this team is in need of more forward depth. That statement is something I never could have imagined myself typing just a few short months ago but it’s true. Injuries are starting to take their toll and as I mentioned prior, they simply don’t have enough impactful forwards at the AHL level to keep winning with their call-ups. Maybe they’ll prove me wrong but I see a real need for a mid-level forward acquisition if this team wants to continue finding success.