The Hockey Writers’ inaugural NHL Draft Prospect Guide is now available at Amazon. It features 150 prospect profiles written by the THW Draft Team. To acknowledge this ‘first’ from THW, we offer a 12 question quiz on the history of the NHL draft. 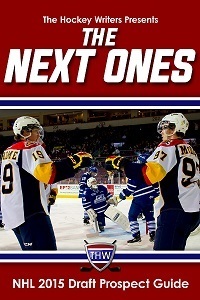 1. Who was the first player to be inducted into the Hockey Hall of Fame who had also been a product of the amateur draft?
A. Ken Dryden
B. Pete Mahovlich
C. Darryl Sittler

2. In 1967 the Detroit Red Wings took Allan Karlander with the 17th overall pick. What was the significance of this pick?
A. Karlander was legally blind (first blind NHLer)
B. Karlander was a product of the US collegiate system (first NHL frat bro)
C. Karlander was second in line to the Grand Duchy of Luxembourg (first hereditary Grand Duke)

5. Who was the first Russian-born player to be drafted in the first round?
A. Alexei Kovalev
B. Darius Kaspiritus
C. Alexei Yashin

7. Which then-goaltender and future color commentator was drafted before Patrick Roy in the 1984 draft?
A. Darryl Reaugh
B. Darren Pang

8. Who was the first US-born player to be ranked number one overall by NHL Central Scouting?
A. Phil Housley
B. Pat LaFontaine
C. Brian Lawton

12. You know what happened in the ‘Sidney Crosby Sweepstakes.’ You think you know what’ll happen in the ‘Connor McDavid Lottery’. What happened in the ‘Brian Bellows Derby’?
A. Boston took Bellows first overall, and the rest is history
B. Boston shocked the hockey world by taking Gord Kluzack
C. Boston traded the first overall pick in a package that actually included a prospect named Wayne Grotski.

2. B. The Wings became the first team to draft a player from the US collegiate system when they took Michigan Tech’s Allan Karlander. He had averaged slightly more than a point per game during his time in the NCAA.

3. C. In 1969 the St. Louis Blues picked Swede Tommi Salmelainen with the 66th overall pick. He never played a single NHL game, but the following season he played 62 games for the Kansas City Blues of the CHL, scoring 6-16-22 points.

4. B. In 1975, with the 160th overall pick, the Philadelphia Flyers selected Russian-born Viktor Khatulev. He never played in the NHL either. In fact according to Joe Pelletier, he didn’t even find out he’d been drafted until 1978.

8. B. Despite his top ranking, LaFontaine dropped to 3rd overall.

9. C. The Latvian Magician was at the end of a stellar career in Russia when the North Stars picked him.