I’m not going to sugar coat it, the Buffalo Sabres are a dumpster fire. They’re currently wasting Jack Eichel’s early years and are doing no service to young guns like Rasmus Ristolainen and Sam Reinhart. Quite frankly, I’m not even sure Rasmus Dahlin could turn this franchise around, although I do like new general manager Jason Botterill. Things could get better, but not before the start of next season.

The Nashville Predators strolled into Buffalo, probably thinking they had the two points in the bag, but life doesn’t always work out that way. Unfortunately for the Sabres mafia, it ended exactly that way Monday night. Roman Josi led his club through a boring game that ended with the Predators extending their league-leading point totals. It wasn’t all sunshine and rainbows though, as the Sabres tried their hardest to steal a game. Two Predators in particular stood out.

Those that know me will tell you how I’m Mattias Ekholm’s biggest fan. He never gets enough credit for all that he does, and is probably the second or third most important player on this defense. Monday night was no different, as Ekholm was simultaneously the best shutdown defender and the best power forward on the Predators. For reference, I’m using unblocked shot attempts (Fenwick), goals, high danger chances (HDC), and zone starts for (offensive) and against (defensive). All stats are at five on five. 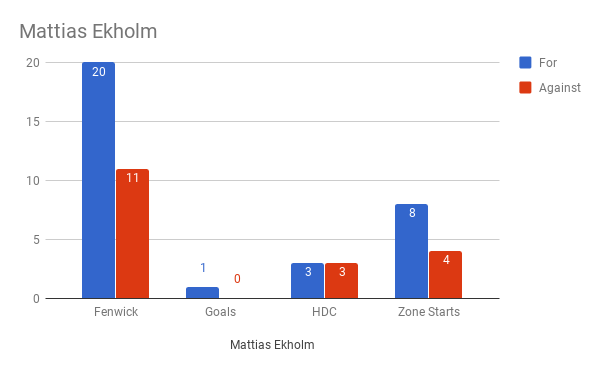 This gives me a warm fuzzy feeling, and Ekholm should be proud of his play. He’s been a rock all season and has played in different roles, but is now settling back into his role as a shot suppressor. The fact is that while Ekholm gave up 11 unblocked shot attempts, he only surrendered seven shots on net. His defensive pressure left many forwards without time to take a proper or dangerous shot. Ekholm did Pekka Rinne quite a few favors over the course of the game, and that helped Rinne achieve the shutout.

There was some unfamiliar territory though, as Ekholm started in the offensive zone 66% of the time. That number is a skyscraper compared to his season average of 48.35%. To his credit, Ekholm took full advantage of it as he helped produce a goal, although he didn’t receive a point for it. I mentioned it earlier, but Ekholm was a dominant power forward, his play below the offensive goal line and along the boards was incredible. He used his six-foot-three-inch frame to bully smaller players and create chances that would be impossible for guys that are not of Ekholm’s stature. This exquisite play created two scoring chances, although failed to create or prevent any high danger chances.

I like to call the Ekholm, the big eraser because he can make a superstar forward look like a mediocre player. He’s been getting better as the season has gone on, and although this performance was against lesser competition, Ekholm stood out.

Everyone loves Viktor Arvidsson, or as he’s known around Nashville, Arvy. He’s smallest member of the first line but it always seems like he’s working the hardest. Arvidsson is an underdog in that he was drafted in a late round and is considered to be “too small” for the NHL. He’s proven the critics wrong and is having another great year after signing a long contract last season. Things were slow to start for the small Swede, but March has been his month, and Monday night’s game reflected that. We’re using the same stats for Arvidsson as we did with Ekholm. 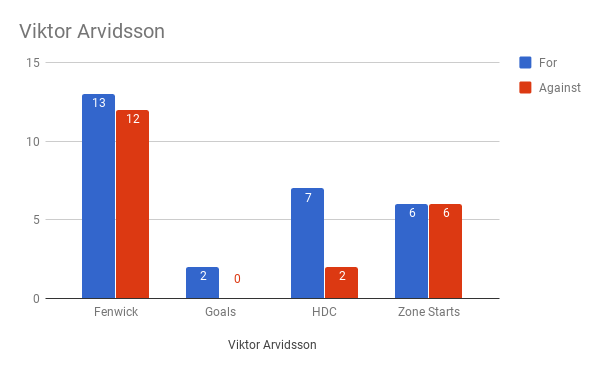 Arvidsson was a bundle of fun on Monday. He cut to the slot and net front often and with great pleasure. The Sabres’ defense had no clue how to contain him, and it showed. Of the seven high danger chances Arvidsson was on the ice for, he created three of them. That’s literally a fourth of what the Predators created all night, and those three chances led to the two goals that JoFA scored. Arvidsson had two points, both assists with one being secondary and the other being primary.

JoFA and Arvidsson spent the majority of their time taking on Eichel and Reinhart, and came out on the winning side. There was no zone sheltering and absolutely no talent sheltering, yet JoFA was a dominant force. The top line is hitting their stride at the exact right time, and the Predators will need them in order to go far in the playoffs.

The Toronto Maple Leafs come to town for a heavyweight match between two of the best teams in the NHL. The Predators have one of the most dominant defenses in the NHL while the Leafs seem to score at will. One thing is for certain, Frederick Andersen and Pekka Rinne will have their hands full all night.